Can Facebook activate a billion consumers to be green?

Carefully, no doubt. Pushing folks too hard or in the wrong direction or with a less-than-compelling message might squander the opportunity, maybe even turn people off. But inform and inspire such a sizeable audience to act and — well, anything’s possible.

That’s the delicious dilemma of Bill Weihl and his team at Facebook, which in recent months have been thinking hard about tools, partners, and strategies it can deploy on its massive, billion-member platform. It’s an unprecedented opportunity, online or off, one that no other company on the planet has enjoyed.

I spoke with Weihl recently about that opportunity, as well as how Facebook is approaching its own environmental footprint, and how it is sharing its leadership in the design of computer servers and data centers to have an impact beyond its own operations.

Facebook represents the latest high-leverage opportunity for Weihl, who left his previous job, as Google’s “energy czar,” late last year to join the social media company in January as its first Manager of Energy Efficiency and Sustainability. That title doesn’t really do justice to Weihl’s broad portfolio there. The title indicated in his email signature — “sustainability guru” — comes closer.

I began our conversation by asking Weihl what prompted his move from one Internet giant to another. “Two things,” he said. The first was “the opportunity to join an organization again that's very early in its evolution and work on sustainability, and to help figure out what makes sense and what works in this young, small organization to really drive sustainability.”

Related to that, he said, is the extent to which Facebook “has already been very active in being transparent about its operations around its datacenter designs, trying to engage the whole industry and the whole ecosystem in the industry around making those designs much more efficient, and having that happen faster for everybody, as opposed to just for us.”

One signature Facebook initiative is the Open Compute Project, launched 18 months ago to openly share custom data center designs that improve server and data-center efficiency. Its initial focus was to publish data center designs it developed for its Prineville, Ore., facility, as well as its custom designs for servers, power supplies and backup power units. The move was a departure from Weihl’s former employer, Google, which also worked hard to improve server and data center efficiency, but which kept the details of its innovations close to the vest. Open Compute has since been spun off as an independent nonprofit organization whose members include Advanced Micro Devices, Dell, HP, Intel, Rackspace, Salesforce.com, and VMware.

“We leveraged our brand and the influence we have through that in getting Open Compute off the ground, getting others to agree to join us in it, and continuing to drive that to produce real results,” said Weihl. “There have been new specs coming about Open Compute every few months in terms of new rack designs, new storage server designs that provide both greater plug-and-play ability, as well as greater efficiency.”

Weihl’s role at Facebook puts him in the center of a lot of activity. He sits in the company’s infrastructure organization, which runs data centers and other core activities. He has a small team of direct reports, as well as “a few people scattered around the company — or, really, I should say embedded in the company in various places where sustainability is relevant,” such as real estate and facilities. “We don't just have a group off in a corner that's doing sustainability,” he notes.

“We've also got some people on our platform partnership team. These are the people who develop documentation and put on hackathons and hold seminars to teach people how to use our platform more effectively. Sometimes they work one-on-one with key partners. We've got a couple people there who have been helping people who are writing applications to solve sustainability problems.” 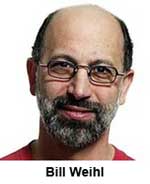 It’s that last effort — Weihl’s second reason for moving from Google to Facebook —that most interested me: How the company can use its massive platform, which crossed the billion-member threshold this month, to promote sustainability-minded behaviors.

It’s just getting going. Last year, Facebook partnered with Opower to use social media to influence people's energy use and behavior. Opower launched an application that uses Facebook’s platform to allow people to compare their energy use with others and compete with friends. Similarly, Recyclebank — which rewards people for taking everyday green actions with discounts and deals from local and national businesses — uses Facebook (as well as Twitter) to let its members interact with or access the site’s content via mobile devices.

I asked Weihl how the Opower partnership is going. “The app has now been out for about six months and the engagement has been unbelievably high,” he said. “When people start using the app, a very high percentage of them continue to use it on a regular basis, and I think that's something that is very, very encouraging.”

Meanwhile, he says, Opower is working on new features. “They are trying to learn and move fast and iterate, and we're trying to do that with them. As they add things like gamification, competitions, and badges, I think engagement should get higher, and we should see the adoption of the app spread virally in a much more significant way.”

The Opower partnership confirmed what Weihl and his colleagues believed was true: that reducing the friction and the effort involved in interacting with applications like this is important. “The statistic I've heard is that today in the U.S., people spend about six minutes a year thinking about their home energy use,” said Weihl. “So you're not going to up that by one or two orders of magnitude if it involves much effort. But if you do it in a way that gets people thinking about how they relate to other people and doesn't require one to actually do much, you can begin to draw them in and hopefully begin to change the way they think about this stuff and change behavior.”

“So, where does this go?” I asked. “What are you learning as you help people be more transparent and compare themselves to the Joneses? What comes next?”

Weihl said that Facebook is working to engage the academic community to study the impacts of such apps, “and, from a behavioral perspective, which kinds of things actually engage people and result in real changes of behavior and purchasing that drive reductions in energy use.”

He continued. “Opower has certainly demonstrated, over the last number of years, a very consistent small, single-digit percentage reduction in energy use from the scorecards that they've been sending people. What we're talking about is adding an online, very personal social element to that. The hypothesis is that it will make a significant difference, but that's, at the moment, just a hypothesis. The goal is to gather enough data and do a careful study of that over the next number of months or a year.

“At the same time, we are very interested in encouraging other people to leverage the platform. If they're working on solving sustainability problems using Web technologies — either desktop, Web, mobile, or whatever — we're very interested in encouraging them to think about adding social to that. Or, even better, building social in from the get-go, which can make a big difference in the scale of the impact and the speed at which they can reach a very large audience.”

These early projects and research efforts could be pivotal in influencing future behavioral change around sustainability, and even green marketing. I imagine that as the Opowers and Recyclebanks start to demonstrate the potential here, that consumer packaged goods companies and other marketers will start to flock to Facebook and find ways to make green marketing work in ways it hasn't in the past.

Weihl concurred. “I certainly think there's real potential there. Ultimately, what we want people to do is to change behavior. Some of that might be purchasing behavior. Some of it might be thinking about the way they consume energy in their house or in their vehicles. And actually engaging people — as opposed to just saying, ‘Our product is better’ — is very much aligned with trying to get people to change their behavior and to get people to think about, ‘What is the behavioral norm in my community?’”

That's something that social networks like Facebook can help people see. Lots of people. And if Facebook can help consumers around the world understand what their friends and neighbors are doing for the planet and their community, and if that, in turn, starts conversations and opens minds and changes behavior, Facebook stands to position itself as a catalytic force for good, enabling an army of potential change agents, one billion strong.