Your latest crazy idea of the day combines genetic modification with industrial agriculture to reduce water pollution from hog farms.

The story, from National Geographic News:

A genetically engineered pig recently approved for limited production in Canada makes urine and feces that contain up to 65 percent less phosphorous, officials have announced.

That could be good news for lakes, rivers, and ocean deltas, where phosphorous from animal waste can play a role in causing algal blooms. These outbursts of algae rapidly deplete the water's oxygen, creating vast dead zones for fish and other aquatic life. (Related: "World's Largest Dead Zone Suffocating Sea.")

The new biotech pig could take years to pass U.S. and Canadian tests for commercial use and human consumption, noted Steven Liss, an environmental scientist at the University of Guelph in Ontario and a spokesperson for the project.

We've covered GMOs a fair amount lately, in part because, as Marc Gunther noted, genetically modified organisms of many types (from food crops to trees to, now, pigs) have been growing in popularity around the world.

Some types of GMOs are at least launched with good intentions -- like the Golden Rice that was supposed to (but doesn't) contain enough vitamin A to supplement diets that otherwise lack the nutrient. But the EnviroPig strikes me as an innovation more akin to Monsanto's Roundup Ready crops: Designed to resist the company's popular and highly profitable "broad spectrum" herbicide, it also not-coincidentally allows farmers (and homeowners) to spray the herbicide willy-nilly, despite its toxicity. 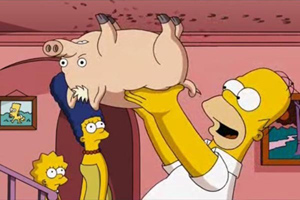 After all, small-scale farmers don't have a problem with several dozen or even a few hundred pigs polluting waters and causing massive dead zones in the Gulf of Mexico. It's only when you scale it up to CAFOs with thousands of farms -- hog farms with 5,000 or more pigs represented more than half of U.S. hog farms in 2004 -- that you see the highly polluting effects of their considerable output.

The National Geographic News article, by Anne Minard, has much more on the EnviroPig: Gene-Altered "Enviropig" to Reduce Dead Zones?"