It seems like every month for years, some company in the digital set has committed to, or better yet, achieved 100 percent renewable power supply. Facebook, Apple, Google and Amazon all have pledged to go 100 percent — and some have made it, at least with their energy-intensive data centers. Even data center company Switch is building a 1 gigawatt solar power farm in Nevada.

I believe that the healthcare sector will be next. Hospitals need to clean up their energy act. And with this, the U.S. will keep moving the needle in the right direction (although not yet far or fast enough). I’m heartened by a report just out from the Bay Area Council Economic Institute (BACEI) on "Building a Climate-Smart Healthcare System for California."

The report has lots of great facts and ideas for the giants of the medical industry to tackle cost, customer need and carbon emissions.

The reason I’m optimistic we’ll see a similar move from big healthcare companies, as with big data companies, is that it just makes sense. Dollars and cents. They have a lot to save.

(Embarrassing note: I had no idea how big — and how wasteful — healthcare is.)

California’s healthcare sector spending was 13 percent of state GDP in 2016, the last year for which we have numbers. That’s a bigger than the entire economy of Oregon. At a national level, where these things have been tracked for some time, healthcare emissions were 10 percent of all emissions. Those emissions are growing. And so is the scale of the industry, from $3.4 trillion nationally in 2016 to an estimated $5.5 trillion by 2025. That’s trillion with a T.

So, Doc, where should we start? Let’s triage where the bleeding is worst.

Hospitals are like the data centers in technology: They are the energy hogs in the healthcare ecosystem.

Hospitals produce much of the "healthcare system" emissions — a whopping 36 percent.

I took the above photo of a heating attempt in a nice big foyer in a relatively new, supposedly state-of-the-art medical center. The fans (see close-up below) were blowing hot air trying to fend off an Illinois winter. 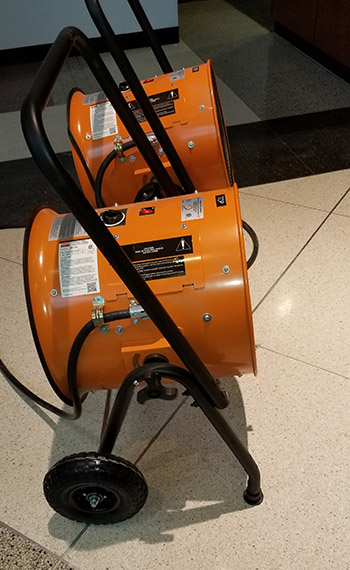 And sure enough, the BACEI Report found that "ventilation reform" is the lowest-hanging fruit. Hospitals use three to five times as much energy as a five-star hotel on heating, ventilation and air conditioning (HVAC). This is often two-thirds or even three-quarters of a hospital’s energy use.

That’s a lot of hot air.

Many hospital staff have an ingrained belief about building management and the need to circulate more air for germ control. Some of that is true, but sometimes circulating air can have negative health effects. It’s better to have smart controls to get the air just right.

Kaiser Permanente’s South Bay Medical Center in Harbor City, California, is host to a first-in-the-nation demo project for advanced air distribution design and sensors. It will use smart building control systems and monitoring-based commissioning, and will reduce onsite natural gas consumption for space conditioning and ventilation by 30 to 50 percent. All the while it will meet or beat health and safety standards for indoor air quality in such a controlled environment.

Not just heat but light

Lighting is another ripe opportunity inside and outside most hospitals. As I learned in my recent visit, lights are on all day and night throughout those big hospital buildings. There are opportunities galore to manage the lumens better and to create a better, healthier experience for the patients and for the people that care for them.

In 2014 the NorthBay VacaValley Hospital in Vacaville, California, became one of the first healthcare facilities in the nation to install an energy-efficient networked adaptive outdoor lighting system (PDF). The changeover to LED luminaires led to a 33 percent reduction in energy use. The networked control system then reduced the LED lighting’s energy requirement by 49 percent. The hospital saves 29 megawatt-hours annually against the baseline. (Hat tip to the UC Davis California Lighting Technology Center, which, I am proud to say, the California Clean Energy Fund long has supported.)

And then there’s new build

As you may have noticed, a lot of new hospitals are going up. An aging population plus the replacement of buildings for seismic safety requirements means many new hospitals will be built in coming years. So, let’s build 'em right. Which means tight and energy efficient. The DOE estimates that hospitals are 2.5 times more energy intensive than office buildings of similar size. Time to change.

Again, there’s good news on this front, thanks to Health Care Without Harm, our partners in supporting the report from BACEI. It ran a pilot program from 2002 to 2011 that laid the foundation for LEED certification of healthcare facilities by the U.S. Green Building Council. These LEED-certified buildings, when built and run right, are estimated to reduce a hospital’s energy use by 25 percent, bills by 19 percent and emissions by 34 percent.

The University of California in San Francisco, one of the well-known medical schools and hospital campuses, has pledged to build all new facilities to meet a minimum Silver-level LEED certification. This is part of the broader University of California plan to achieve total carbon neutrality by 2025 and comes as it rebuilds its main hospital with a $500 million donation from the Helen Diller Foundation. But it’s not only UC San Francisco leading the change.

Across the San Francisco Bay, Kaiser Permanente has committed to be carbon net positive, not just neutral, by 2025. It has been maximizing energy efficiency, as demonstrated with the ventilation project above, as well as procurement of 70 MW of solar energy at up to 100 of its hospitals and other facilities. To get to "net positive," Kaiser Permanente also will buy offsite wind and solar and purchase offsets. And it will divert 100 percent of its non-hazardous waste from landfill, which is a big solution to reducing carbon emissions.

As Ramé Hemstreet, chief sustainable resources officer and VP of operations at Kaiser, puts it: "Kaiser Permanente is committed to eliminating and, not later than 2025, reversing our contribution to climate change by becoming carbon net positive.  We will achieve this goal through a combination of initiatives including continuously improving the energy efficiency of our buildings, activating more solar and wind energy both onsite and offsite, and sourcing more responsibly the food we serve our patients and employees. These measures are good for the climate and make good business sense."

And it’s not just the crazy kids on the Left Coast that are doing it. Gundersen Health System in LaCrosse, Wisconsin, became the first "energy independent" health system in the United States by offsetting 100 percent of its fossil fuel use with locally produced renewable energy.

Treating the system, not the symptoms

Some of the more ambitious plans, such as those from Kaiser and Dignity Health, include waste, water and food. This reminded me that a hospital is so much more than a data center. Patients in beds are not like servers in racks, and they will require much more ingenuity to serve better each year. Reducing the electron drip to an AMD processor feeding my Facebook addiction is a lesser problem than just the right drip into the lifeblood of a newborn baby in a neonatal unit. The BACEI report understatedly notes that Kaiser’s plans for the largest integrated system in the U.S. "is intentionally ambitious."

Indeed, it is. There are technologies, goods and services that Kaiser cannot yet get to achieve the vision. But its strategic intent will create a market for entrepreneurs and intrapreneurs within the system to fix it. By going upstream into supply chains for food and water, Kaiser saves expense and emissions. By going downstream into waste management, it tackles much more of the system. But it also will have to deal with transportation.

Hospitals are big employers and have complex logistical supply chains. From ambulances to hazardous waste trucks, they are well-placed to reduce transportation emissions. Some strategies could include changing employee commuting behavior, using EVs and fixing distribution channels.

From ambulances to hazardous waste trucks, hospitals are well-placed to reduce transportation emissions.

UCSF also has been a leader in this field. It's the second biggest employer in San Francisco, with 25,000 people, and offers a wide variety of commuter options and benefits to staff, faculty and students. It's won awards for being one of the "Best Workplaces for Commuters" from the National Center for Transit Research.

More left to do

There are many more examples in the BACEI report of this whole-systems approach to being climate-smart, fiscally and physically healthy in the management of hospitals. Perhaps the most striking is the story of UC San Diego Health, which switched to a hotel room service model in its hospital.

In this system, patients got to order the food they wanted, when they wanted — of course, within the dietary bounds set by their doctor This increased patient satisfaction, but it also had an enormous impact on food waste and emissions. UCSD Health patients also can use iPads to control their own room temperature and lighting and access their electronic medical records.

In 2016, UCSD Health Nutrition Services compared food waste generated from this kind of room service (at its Thornton Hill hospital) to the cook-chill operation at Hillcrest Hospital, which reheats and serves up conventional meals in wards. It found that food waste per patient was 66 percent less. So, it's switching to room service at Hillcrest, too and this year it projects to reduce food waste by 53,000 pounds and save $50,000.

As BACEI noted, "UCSD will have happier, healthier patients and at the same time reduce greenhouse gas emissions by 147 MT of CO2e, which is equivalent to taking 31 cars off the road every year."

And ain’t that what it’s all about?

Single-payer or not, healthcare should be focused on better care, reduced waste and fewer greenhouse emissions. After all, professionals such as the California Nurses Association, who long have championed climate action, know that an ounce of prevention is worth a pound of cure, especially when it comes to the harmful effects of carbon pollution.

So, let’s have a new race — a race like the one among big tech firms that started a decade ago — to de-link our bits and bytes of data from dirty energy. Let the games begin to see who can come up with the smartest solutions to the problems facing hospitals and healthcare more broadly, so those whopping trillions of dollars of care can first do no harm.

How the Navajo got their day in the sun

Jamaica's prime minister is now the 'Solar Head of State'

The end of natural gas is near

See all by Danny Kennedy