Can multinationals survive the ‘Breakthrough Decade’?

It’s an intriguing question. For all the talk these days about “disruption” and “systems change,” there’s precious little evidence of either among the world’s biggest companies.

True, companies set some bold, even audacious goals — to be 100 percent renewably powered or zero-waste, among others — but these are radical only within the bounds of current business models and market dynamics. They’re hardly disruptive.

John Elkington has spent more than three decades trying to change that kind of thinking and to prepare C-suite executives and their boards for a world of resource limits and a “VUCA” world — one characterized by Volatility, Uncertainty, Complexity and Ambiguity. (VUCA was coined by the U.S. Army War College in the early 1990s to describe what the world would be like after the Soviet Union's collapse. It’s proved prescient, to say the least.)

Elkington will be the first to tell you that this sort of work is slow-going.

Elkington, for the uninitiated, is the prolific author, entrepreneur and — well, “thought leader” doesn’t really do him justice — who has been at the forefront of sustainability for nearly 30 years, including founding the think tank and consultancy SustainAbility. He coined the term "triple bottom line."

Today, he operates from Volans, which helps clients “look beyond incremental change and address systemic challenges at scale.” (He’s also a regular GreenBiz columnist.) His projects and writings always seem to push the boundaries of my thinking, and many others'.

His newest work is a twofer: “The Stretch Agenda” (PDF), a dramatization “spotlighting top team dynamics and conversations in the boardroom of a major global company as it ponders how it can shift its business model to address the profound economic, social and environmental challenges ahead,” and “The Breakthrough Forecast” (PDF), a market intelligence briefing that paints a picture of the business agenda out to 2025 using market projects, valuations and interviews.

The two new Volans reports follow last fall’s publication of “The Breakthrough Challenge,” a book co-authored by Elkington and Jochen Zeitz, formerly chairman and CEO of Puma, based on the work of The B Team (which Zeitz co-chairs). It described how to redefine business “to account for true long–term costs throughout supply chains,” and how leaders “must rethink everything: what counts on balance sheets, how to incentivize performance, who does what in the C–suite and even what inspires us.”

“The Stretch Agenda” focuses on the period between now and 2025 — what Elkington has dubbed the “breakthrough decade.” It’s make-or-break time, he says:

"By 2025, marking the end of the Decade, the United Nations predicts that world population will have broken the 8 billion people barrier.  Scientists talk of the dawn of the 'Anthropocene,' a geological era in which our species has global environmental impacts akin to geological forces. Such pressures are turning up the heat under a global pressure cooker." 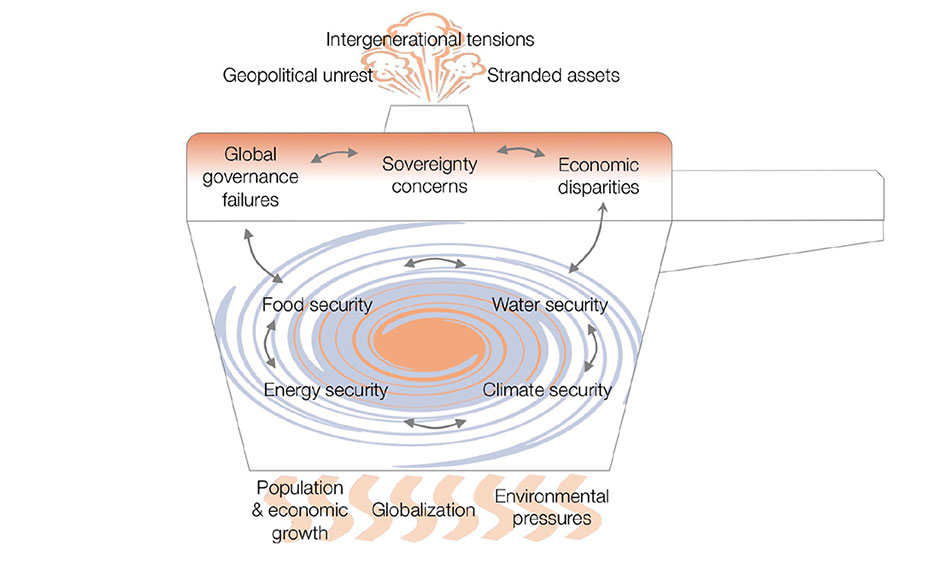 The pressure cooker is an apt metaphor, as described by the graphic above, culled from “The Stretch Agenda.” (Elkington says the graphic was “inspired by the World Economic Forum’s work on Global Risks since 1995.”)

“It’s no accident that the repeated word at the heart of the diagram is security — energy, food, water and climate security,” wrote Elkington. “What used to be seen as citizenship issues are now evolving into major security issues.”

“The Stretch Agenda” is a departure from your typical management treatise. It takes the form of a play, featuring a cast of characters who comprise top management at “MN-Co,” a fictional 33,000-employee multinational company. MN-Co features a veritable Benetton ad’s worth of leaders: Diane, the Canadian chair; Dieter, the German CFO; Monique, the French head of HR; Indra, the Indian “Chief Stretch Officer”; Wang, the “young graduate leader” from China, working in Diane's office. You get the idea.

The play — the chapters are titled “Act 1, Scene 1,” and so on — finds both board and C-suite players meeting to discuss a critical point in the development of their firm, which owns a globally recognized family of brands across a number of industry sectors. The company is finding it tougher to attract top talent. It is slipping in some key sustainability indices. Its future is slipping away.

As Elkington explains, this team embodies years of experience and diverse world views. They know they are incumbents in many markets, and are considering how they can become insurgents. They discuss how their business can shift strategy, focusing both on risks and opportunities.

Spoiler alert: The closing scene sees two future leaders step up to challenge the C-suite to embrace stretch, with urgency, and a stretch checklist emerges as a first step for MN-Co to explore the stretch agenda.

The literary device works. One challenge business executives face when confronted with sustainability-related challenges is understanding how to have the conversation internally — what it even sounds like. “The Stretch Agenda” lets readers inside one such conversation — albeit a fictional one. It also makes for a breezy read.

Elkington notes that the conversation is necessarily dramatized for effect, but is based on real situations he experienced over some 40 years of working with leaders “responding to early tremors of seismic shifts that have the potential to sink entire industries — and create totally new ones.”

I’ll spare you the play’s three acts and seven scenes, and encourage you to read it yourself. It models the kind of conversations that will be critical if companies are to stretch beyond their comfort zones to address the profound economic, social and environmental challenges ahead.

Said Elkington: “We must transform capitalism, markets and business to ensure that they are future-fit for the new century. To this end, we must learn how to stretch our thinking, our horizons, our ambitions, ourselves, our teams, our organizations, our economies and, ultimately, our civilization. This is a challenge which is very unusual in the history of our species.”