Can a holy alliance between Pope Francis and an existing chorus of religious activist investors nudge businesses toward more aggressive action on climate?

In his widely anticipated encyclical on climate change and poverty, “Laudato Si,” Pope Francis addresses his call to action to “every person who inhabits this planet," noting that the degradation of the planet will have “grave consequences for us all.”

Businesses, many of which have until now been able to ignore calls for action on climate, might not be able to claim immunity from the pope's call.

For one, the teachings of the head of the Roman Catholic Church are likely to be considered pretty seriously by at least 1.2 billion consumers — the world’s Catholic population. If consumers of everything from packaged food to pharmaceuticals to smartphones are told they have a moral obligation to care for the earth in their everyday actions, they might think twice about buying from companies that have ignored sustainability issues.

In many ways, the pope positions the conversation on climate as a crucial opportunity to reconsider the fundamental concept of social responsibility, observers are saying.

"This Encyclical will re-frame the environmental debate — particularly humanity's response to climate change — in moral terms," said Georgetown University McDonough School of Business Professor Robert Bies. "It is an issue of responsibility and stewardship: adverse impact on the poor around the world."

Moreover, the head of the Catholic Church raises several issues that could have direct impacts on corporate sustainability initiatives if taken to heart.

First, there is the pope's rejection of carbon credits, such as those relied upon in cap-and-trade systems, which he warns "may simply become a ploy which permits maintaining the excessive consumption of some countries and sectors." Also underlying the document is a sharp criticism of "technocratic" approaches to climate action, where new technology is unquestioningly accepted as the antidote to ingrained environmental woes.

“The technocratic paradigm … tends to dominate economic and political life," Francis wrote. "The economy accepts every advance in technology with a view to profit, without concern for its potentially negative impact on human beings." 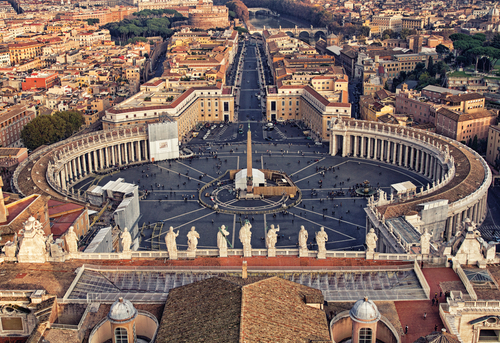 Although today officially marks the release of the Vatican's first encyclical on climate change, this is not the first time religious or faith-based organizations have expressed concern about looming environmental dangers. For decades, religious organizations have taken on the role of advocacy investors by filing shareholder proposals or divesting assets from fossil fuels.

There is also the potential for broader ripple effects of the pope's encyclical in both consumer markets and international political landscapes, especially in the runup to December's U.N. global climate conference, COP 21.

As GreenBiz and others have documented, companies already have responded (or not responded) to mounting climate risks in widely varied ways. Many companies have been proactive in lowering carbon emissions, reducing or even eliminating waste and conserving water.

Jerry Lynch, chief sustainability officer for General Mills, said that the company "recognizes the risks that climate change, water quality and scarcity and other environmental issues present to humanity, our environment and our livelihoods. Changes to our Earth’s ecosystem affect global food security."

Still, others have clung to fossil fuels and continued to seek growth with little concern about environmental impacts.

"Obstructionist attitudes, even on the part of believers, can range from denial of the problem to indifference, nonchalant resignation or blind confidence in technical solutions," the encyclical stated. "We require a new and universal solidarity."

Preaching to the choir

Pope Francis is far from the first faith leader to call for heeding the needs of the environment. He’s not even the first pope to do so; his two recent predecessors, Benedict XVI and John Paul II, called on the faithful to protect God’s creation.

In the United States, 18,000 congregations of various religious denominations are members of the Interfaith Power & Light coalition, working to make their congregations green by recycling, reducing electricity use or shifting to renewable sources such as solar and espousing carpooling among congregants. Among other things, many of these congregations pledged to reduce their carbon emissions by half in the next 15 years.

Rev. Sally Bingham, the Episcopalian priest who founded Interfaith Power & Light, said that the pope's influence will raises the profile of the moral impetus for climate action. 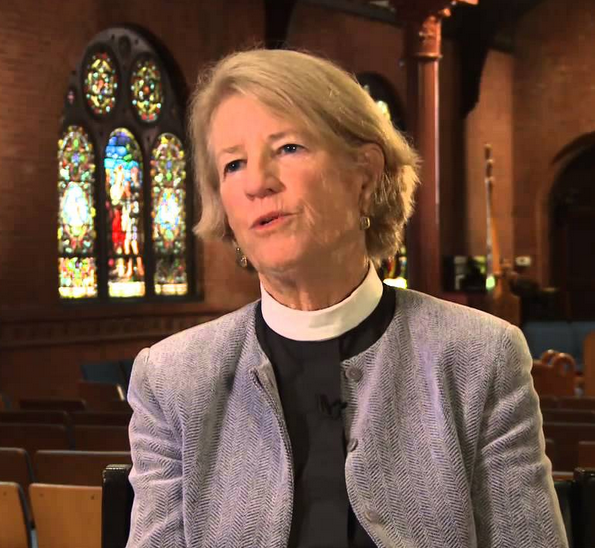 “The encyclical will affect business people because business people are often tied to religious traditions,” Bingham said  “If they are hearing their clergy — their priest, rabbi, imam — talk about moral responsibility from the pulpit, it is going to have an impact on them.”

The Church of Sweden, which cites 7 million members and $840 million in assets under management as of 2014, not only has been preaching about climate change but taken significant action. The church started divesting from fossil fuels in 2008.

“The global community needs to make the conversion from a fossil fuel driven economy to long-term, sustainable solutions if we are going to be able to meet the increased need of resources and energy," according to the church’s Responsible Investment report. "Changes in the climate are a fact.”

However, the church’s asset managers also decided that the solution was not only divestment, but also looking to invest in companies that would help reduce the impact of carbon emissions, such as renewable energy and clean tech.

“The basis for our whole asset management is our financial policy which states very clearly how we look at investments. … Explicitly it says that we should invest in responsible and sustainable companies,” said Gunella Hahn, head of Responsible Investing for the Church of Sweden. “We just put fossil fuels in the same box as weapons and tobacco. We didn’t want to be a part of the problem. We wanted to be a part of the solution and invest in renewables and energy efficiency.”

In the U.S., the United Church of Christ voted in 2013 to move toward divestment from fossil fuels by 2018. The organization includes about 5,000 churches in the United States.

Other faith-based organizations also have been lobbying for a more careful look at carbon-intensive investments in a desire to move toward a more sustainable future.

The group has been engaging with companies on climate change through both direct dialogues as well as shareholder proposals and occasionally proxy resolutions.

“Shareholder resolutions are one of the tactics of investor and corporate engagement," said Susanna McDermott, director of communications for ICCR. "What that implies is that they are in conversation on a regular basis with companies."

Shareholder resolutions are non-binding agreements allowed for any shareholder owning at least 1 percent, or $2,000 worth of stock, for at least a year.

Over the past 40 years, ICCR has filed over 200 shareholder resolutions with companies including Altria, Chevron and Exxon Mobil — a group that largely has remained staunch in its inaction on climate issues.

But if only because businesses need customers, the encyclical might be a clarion call to act more boldly on lessening their carbon footprints and acting sustainably.

A shift in the status quo

Central to the pope's message in the new climate encyclical — that environmental challenges "concern and affect us all" — is the idea that no one is immune from an obligation to act on climate.

Bies and others also noted an element of irony in recent U.S. business history related to social responsibility; businesses in the United States scored a political victory of sorts when the U.S. Supreme Court ruled that corporations are akin to persons in having a First Amendment rights, raising subsequent questions about how companies may be more obligated act on challenges to society at large.

“The pope made it clear that each person bears responsibility for climate change," said Kathleen Rogers, president of Earth Day Network, who was invited by the Vatican to meet with the pope on Earth Day this year. "The Supreme Court also made it clear that a corporation is a person, so I guess the pope is also directing his encyclical to Exxon Mobil and other fossil fuel companies.”

Still, divisive political overtones in the discourse around climate change until now has made unified climate action a pipedream. 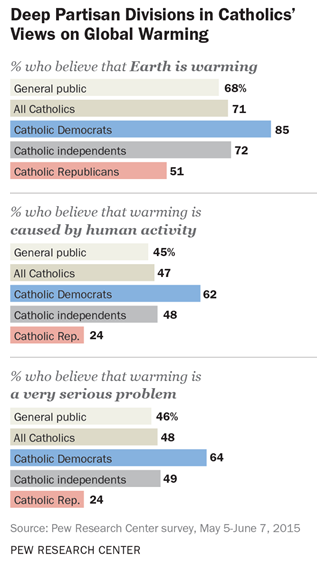 According to a poll by the Pew Research Center, 71 percent of U.S. Catholics believe the planet is getting warmer and 47 percent of Catholic adults attribute that to human activity. Half also view climate change as a serious problem, according to Pew.

Still, what Catholics believe about climate change falls largely along political lines. Only a quarter of Catholic Republicans think global warming is caused by humans.

But in a signifier of the pope's potential to unify, the same Pew researchers found that 86 percent of U.S. Catholics view Pope Francis favorably.

“There’s a lot of people out there who are eager to hear what the Holy Father has to say," said Rev. Seamus Finn, the chief of faith consistent investing for the OIP Investment Trust as well as an active board member of the Interfaith Coalition on Corporate Responsibility. "For some reason — whether they are Catholic or not — they connect with him; they want to be on his bandwagon."

According to The New York Times, the OIP Investment Trust holds assets from over 230 Roman Catholic congregations in 53 countries totaling close to $400 million.

But the pope's visible public stature also means there is no doubt that the encyclical will be debated in the months to come.

In particular, climate action opponents are attacking the pope's heavy focus on the "global inequality" that results from a production and consumption-based "throwaway culture." He points to a dichotomy between wealthy northern countries that degrade the environment at the expense of poor countries in the global South, where garbage is often exported and air pollution is a leading cause of death.

“Gravest effects of all attacks on the environment are suffered by the poorest,” the pope wrote, adding that a true 'ecological debt' exists, due to the disproportionate use of natural resources by industrialized countries.

Already, the Heartland Institute, a climate change-denying lobbying organization that according to its wesbsite "promotes free-market solutions," has seized on the concept of inequality in a rebuttal to a draft of the encyclical leaked early this week.

“Wealth enables people to afford better environmental stewardship. Pope Francis should champion economic development as a solution both to poverty and to environmental degradation," said the press statement issued by the Institute and attributed to Calvin Beisner of the Cornwall Alliance for the Stewardship of Creation. "The leaked draft of the new encyclical does the opposite."

Bies of Georgetown said such backlash is predictable.

"It is also a call to action, and change always creates a reaction," he said. "One only hopes — even prays — that people will actually read the encyclical with an open mind, and not through the lens of one's own self-interest."