It seems simple enough: Take the salt out of water so it’s drinkable.

But it’s far more complex than it appears at first glance. It’s also increasingly crucial in a world where freshwater resources are progressively strained by population growth, development, droughts, climate change and more. That’s why researchers and companies from the United States to Australia are fine-tuning a centuries-old concept that might be the future of quenching the world’s thirst.

“When it comes to increasing water supplies, you have four options: Increase your amount of reuse, increase storage, conserve it or turn to a new source,” said Tom Pankratz, a desalination consultant and current editor of the weekly trade publication Water Desalination Report. “And for many places around the world, the only new source is desalination.”

Desalination technology has been around for centuries. In the Middle East, people long have evaporated brackish groundwater or seawater, then condensed the vapor to produce salt-free water for drinking or, in some cases, for agricultural irrigation.

Over time the process has become more sophisticated. Most modern desalination facilities use reverse osmosis, in which water is pumped at high pressure through semipermeable membranes that remove salt and other minerals.

Worldwide, about 300 million people get some freshwater from more than 17,000 desalination plants in 150 countries. Middle East countries have dominated that market out of necessity and energy availability, but with threats of freshwater shortages spreading around the world, others are rapidly joining their ranks. Industry capacity is growing about 8 percent per year, according to Randy Truby, comptroller and past president of the International Desalination Association, an industry group, with “bursts of activity” in places such as Australia and Singapore. 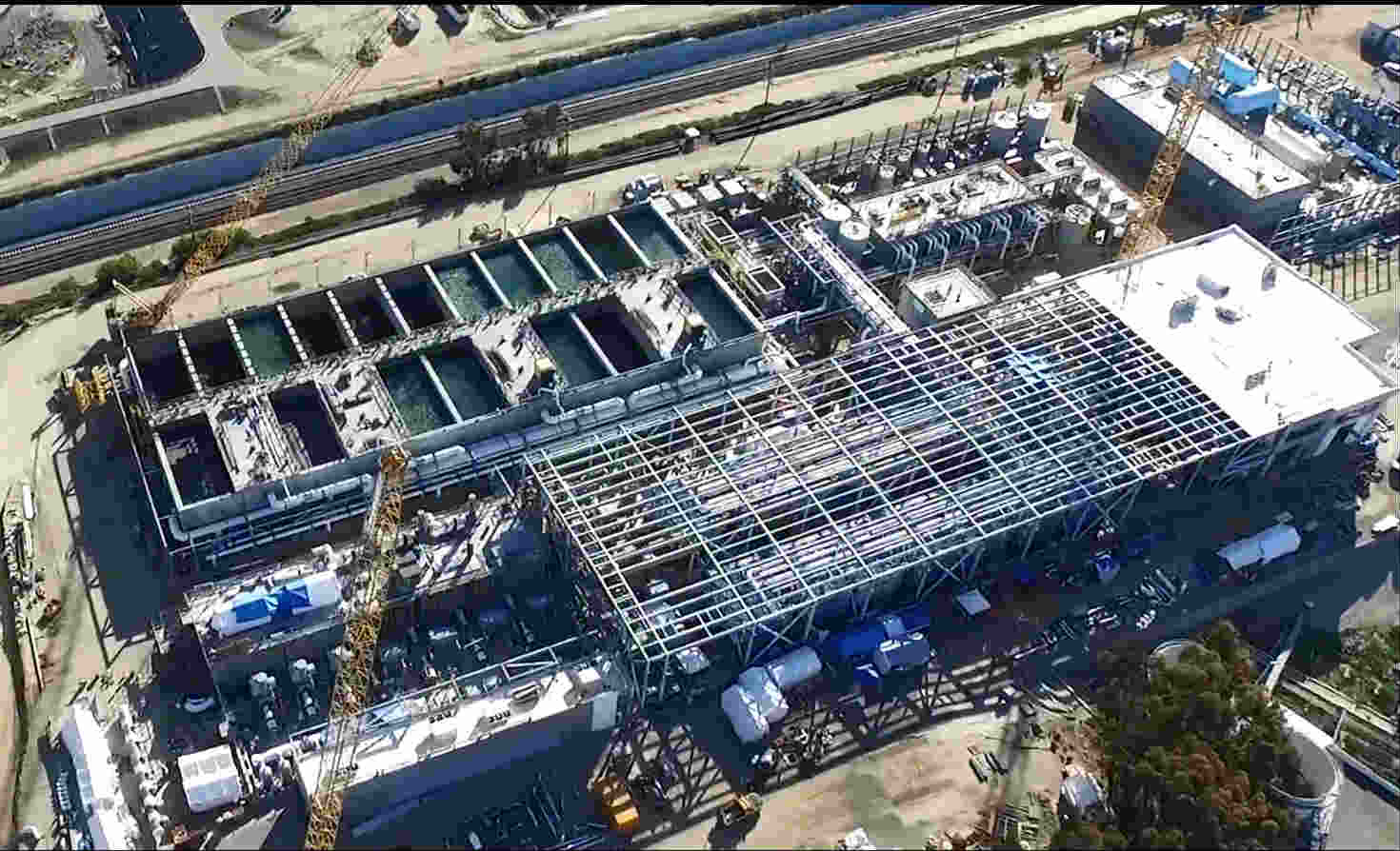 In the United States, a $1 billion plant is being built in Carlsbad, Calif., to provide about 7 percent of the drinking water needs for the San Diego region. When it goes online in late 2015 it will be the biggest in North America, with a 50-million-gallon-per-day capacity. California currently has about 16 desalination plant proposals in the works.

But desalination is expensive. A thousand gallons of freshwater from a desalination plant costs the average U.S. consumer $2.50 to $5, Pankratz said, compared to $2 for conventional freshwater.

It’s also an energy hog: Desalination plants around the world consume more than 200 million kilowatt-hours each day (PDF), with energy costs an estimated 55 percent of plants’ total operation and maintenance costs. It takes most reverse osmosis plants about 3 to 10 kilowatt-hours of energy to produce one cubic meter of freshwater from seawater. Traditional drinking water treatment plants typically use well under 1 kWh per cubic meter.

And it can cause environmental problems, from displacing ocean-dwelling creatures to adversely altering the salt concentrations around them.

Research into a suite of seawater desalination improvements is underway to make the process cheaper and more environmentally friendly — including reducing dependence on fossil fuel–derived energy, which perpetuates the vicious cycle by contributing to climate change that contributes to freshwater shortages in the first place.

Most experts say that reverse osmosis is as efficient as it will get. But some researchers are trying to squeeze more by improving the membranes used to separate salt from water.

Membranes currently used for desalination are mainly thin polyamide films rolled into a hollow tube through which the water wicks. One way to save energy is to increase the diameter of the membranes, which is directly correlated with how much freshwater they can make. Companies are increasingly moving from 8-inch to 16-inch diameter membranes, which have four times the active area.

“You can produce more water while reducing the footprint for the equipment,” said Harold Fravel Jr., executive director of the American Membrane Technology Association, an organization that advances the use of water purification systems.

A lot of membrane research is focused on nanomaterials — materials about 100,000 times smaller than the diameter of a human hair. Massachusetts Institute of Technology researchers reported in 2012 that a membrane made of a one-atom-thick sheet of carbon atoms called graphene could work just as well and requires less pressure to pump water through than polyamide, which is about a thousand times thicker. Less pressure means less energy to operate the system and therefore, lower energy bills.

Graphene is not only durable and incredibly thin, but, unlike polyamide, it’s not sensitive to water treatment compounds such as chlorine. In 2013, Lockheed Martin patented the Perforene membrane, which is one atom thick with holes small enough to trap salt and other minerals but that allow water to pass.

Another popular nanomaterial solution is carbon nanotubes, said Philip Davies, an Aston University researcher who specializes in energy efficient systems for water treatment. Carbon nanotubes are attractive for the same reasons as graphene — strong, durable material packed in a tiny package — and can absorb more than 400 percent of their weight in salt.

Membranes have to be swapped out, so carbon nanotubes’ durability and high absorption rate could reduce replacement frequency, saving time and money.

Membrane technology all “sounds sexy, but it’s not easy,” Pankratz said. “There are engineering challenges when making something so thin that still maintains integrity.”

Graphene and carbon nanotubes are decades away from widespread use, said Wendell Ela, a University of Arizona chemical and environmental engineering professor: “I do see them having an impact, but it’s a ways out.”

Truby said barriers to commercialization include engineering such small materials and making new membranes compatible with current plants and infrastructure.

“It’ll be key to upgrade systems without tearing [them] down and building a whole new plant,” he said.

Others are looking beyond reverse osmosis to another process known as forward osmosis. In forward osmosis, seawater is drawn into the system by a solution that has salts and gases, which creates a high osmotic pressure difference between the solutions. The solutions pass through a membrane together, leaving the salts behind.

The process should use less energy than reverse osmosis, Ela said, because it’s driven by thermodynamics. But last summer MIT scientists reported that forward osmosis for desalination might prove more energy-intensive than reverse osmosis due to the high salt concentration in the solution resulting from the first step.

British company Modern Water operates the first commercial forward osmosis plant in Oman, in the Arabian Peninsula’s southeastern coast. At 26,000 gallons per day, the system has a much smaller capacity than most large-scale reverse osmosis systems. Company officials did not return requests for comments on the plant. However, a company report noted that the plant had a 42 percent reduction in energy compared to reverse osmosis.

Heather Cooley, water program director with the Pacific Institute, a California-based sustainability research organization, said most forward osmosis technology is still in the research and development phase, and that commercial use is five to 10 years out.

Another approach to reducing the energy cost of desalination is RO-PRO, or reverse osmosis pressure retarded osmosis. RO-PRO works by passing an impaired freshwater source, such as wastewater, through a membrane into the highly saline solution leftover from reverse osmosis, which normally would be discharged to the ocean. The mixing of the two produces pressure and energy that is used to power a reverse osmosis pump.

Inspired by a system used by Statkraft, a Norway-based hydropower and renewable energy company, University of Southern California environmental engineering professor Amy Childress and colleagues are piloting RO-PRO in California. Childress said “optimistic” estimates show RO-PRO can reduce the energy needed for reverse osmosis 30 percent. She noted that some unspecified companies have shown interest in their pilot. 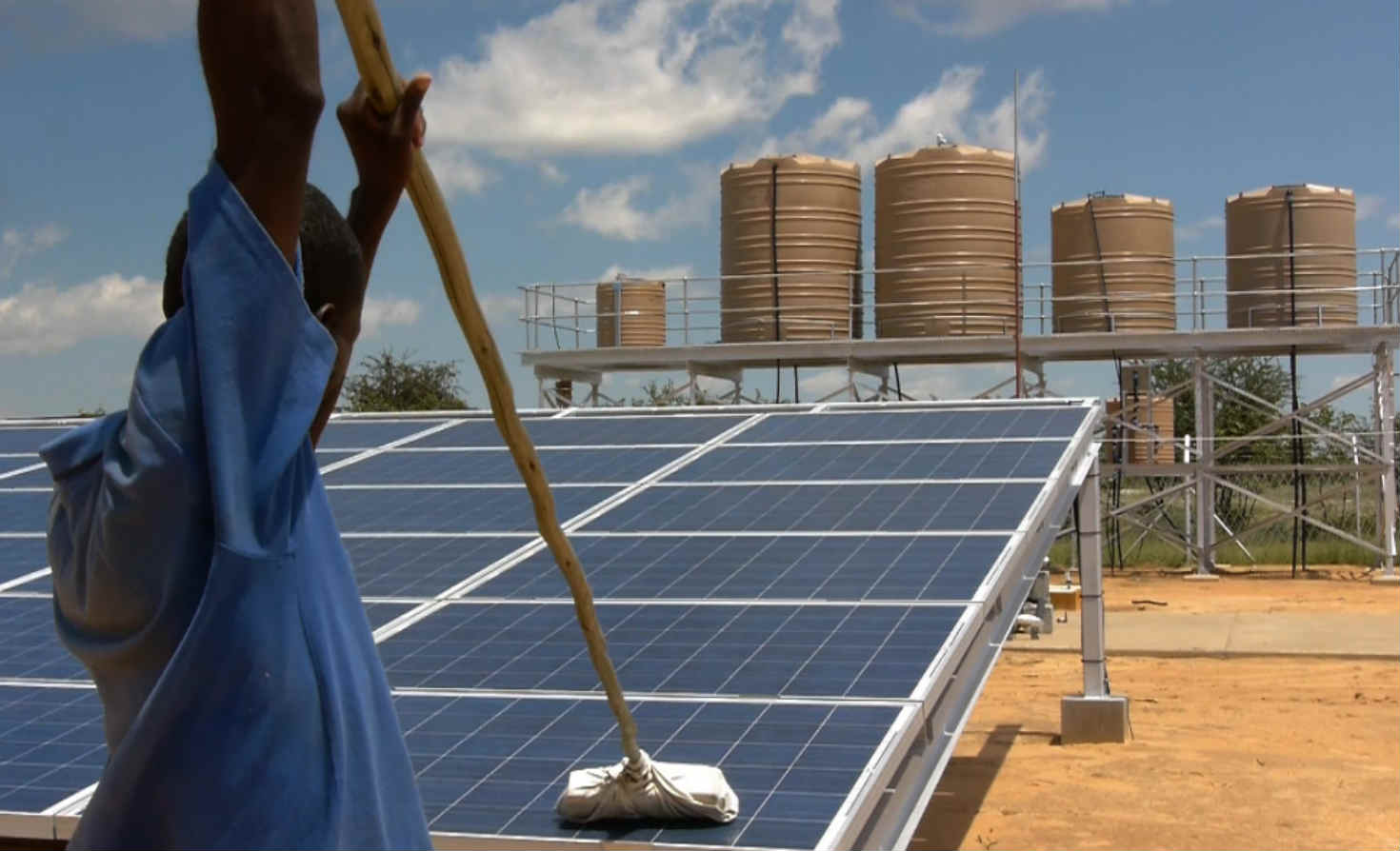 Fravel said many plants are trying to recapture energy from within the process. Turbochargers, for example, take kinetic energy from the outgoing stream of concentrated saltwater and reapply it to the side of incoming seawater. “You might have 900 [pounds per square inch] on the feed side and the concentrate might be coming out at 700 psi. That’s a lot of energy in the concentrate stream,” he said.

Incorporating renewables into the energy input side of things is a particularly promising approach to enhancing desalination’s sustainability. Currently an estimated 1 percent of desalinated water comes from energy from renewable sources, mainly in small-scale facilities. But larger plants are starting to add renewables to their energy portfolio.

After years of struggling with drought, Australia brought six desalination plants online from 2006 to 2012, investing more than $10 billion. The plants all use some renewables for power, mostly through nearby wind farms that put energy into the grid, Pankratz said. And the Sydney Water desalination plant, which supplies about 15 percent of water to Australia’s most populous city, is powered by offsets from the 67-turbine Capital Wind Farm about 170 miles to the south.

Solar energy is attractive for many heavy desalination countries — particularly those in the Middle East and the Caribbean where sun is plentiful. In one of the more ambitious projects, the United Arab Emirates energy company Masdar announced in 2013 it’s working on the world’s largest solar powered desalination plant, capable of producing more than 22 million gallons per day, with a planned launch in 2020.

Plans to use seawater, of course, must consider the implications for sea life. A lot of desalination facilities use open ocean intakes; these are often screened, but the desalination process still can kill organisms during intake or inside the plant’s treatment phases, Cooley said. New subsurface intakes, which go beneath the sand to use it as a natural filter, could help alleviate this concern.

Also, there’s the problem of how to get rid of a lot of very briny water after desalination. Every two gallons a facility takes in means one gallon of drinkable water and one gallon of water that is about twice as salty as when it came in. Most plants discharge this back into the same body of water that serves as the intake source.

The RO-PRO technology offers one way to reduce the salt concentration in the discharge, which can harm bottom-dwelling creatures. Another method gaining popularity is the use of diffusers, a series of nozzles that increase the volume of seawater mixing with the concentrate discharge preventing spots of high salt.

In one of the more novel recent studies addressing ocean discharge, Davies of Aston University heated up briny discharge with solar energy to convert magnesium chloride into magnesium oxide, which he called “a good agent to absorb carbon dioxide.” The research is still is the nascent stages, but could have the dual environmental benefit of reducing discharge and removing CO2 from the ocean using solar power to zap the concentrate.

Ela said smaller plants, such as the forward osmosis plant in Oman, could be the future of desalination technology. A lot of the newer innovations could make economic sense on a smaller scale, and companies wouldn’t have to invest so much in infrastructure, he said.

This also would provide environmental benefits such as allowing renewable energy to play a larger role, because it’s much easier to power small plants with solar and wind than large ones, he said. 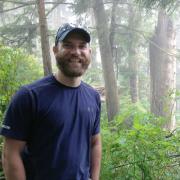 See all by Brian Bienkowski