Even notorious sustainability laggard Amazon is taking action on its goal of powering its hulking cloud computing division with clean energy.

The question now: if and how the tech industry's highly visible — and once seemingly far-fetched — clean energy goals might make a bigger imprint on other industries during a crucial year for climate politics.

“At least 11 big IT companies have committed to 100 percent renewables," said Ryan Schuchard, associate director of climate change for nonprofit sustainability membership group BSR. "(Tech) has one of the best levers of any sector to move on renewables." 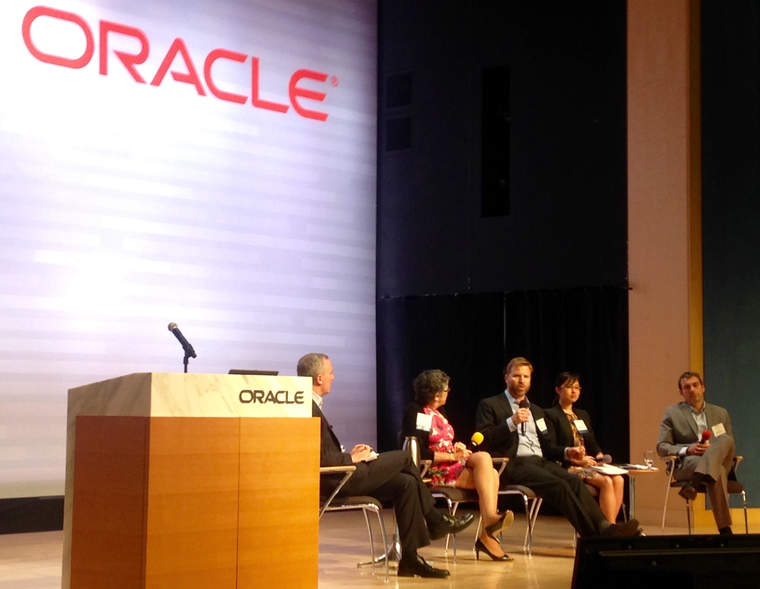 The timing of the remarks of Schuchard and others from tech companies like Hewlett-Packard and EMC about the industry's burgeoning potential to lead on sustainability was no accident.

Many local firms were gathered on Thursday at the sprawling headquarters of Oracle to mark the annual Energy and Sustainability Summit organized by business advocacy organization the Silicon Valley Leadership Group. But the context and urgency surrounding this year's meeting of the Valley's sustainability minds was distinctly different.

With the COP 21 United Nations climate conference set for December in Paris, debate is already building about the feasibility of large-scale international action, like a carbon tax on companies' emissions. Recent news events add to the case for optimists; the Pope's strongly-worded climate encyclical followed a White House announcement that $4 billion in private capital has been raised to fund new clean energy development.

Though businesses have been invited to particpate at COP, and several parallel corporate events are slated to occur in Paris, public leadership efforts on the part of specific companies and industries largely have yet to materialize.

That begs the question of whether big-name Silicon Valley tech companies emulated the world over for their approaches to product innovation — and their unprecedented wealth — might be uniquely positioned to jump into the fray on the road to Paris.

Companies like Apple might do well to illustrate the financial case for proactive climate action, since CEO Tim Cook has already spoken candidly about the long-term energy cost predictability offered by renewable energy and unmatched by increasingly volatile fossil fuels.

Where are the COP crusaders?

In addition to large tech firms being notoriously cash rich — particularly software firms relatively light on material assets — there remains much to be determined when it comes to how aggressive sustainability goals being set within the industry might actually play out.

"The terms of all of those goals are aspirational," Schuchard said, but noted that recent large-scale renewable energy purchases help bolster the pursuit of those objectives.

Though high tech companies are increasingly visible as sensors, software and other gadgets seep into even old-school industries, there are examples of individual businesses in other sectors that have made similarly ambitious committments.

Unilever, Mars, Nestle, H&M and Ikea have all signed on to 100 percent renewable energy goals through CDP, positioning them as other potential leaders heading into COP.

City and state governments, too, are expected to have an amplified voice when the UN meeting convenes at the end of the year.

California, much like its signature tech industry, is one entity that climate action advocates say could bolster the economic case for more stringent government policies.

The state, the world's seventh-biggest economy when measured against entire countries, aims to source 50 percent of its power from renewable sources, increase building efficiency 50 percent and cut emissions 50 percent by 2030.

“We as governments have to push the laggards," said Hilary Firestone, senior project manager specializing in building efficiency in the Los Angeles Mayor’s Office of Sustainability. "This is where regulations can help to achieve some of these goals… to raise the baseline."

Staking out a strategy

When it comes to leadership on climate issues, there is also wide variation in the type of environmental committments that companies are willing to make.

EMC, for instance, has opted to place an emphasis on materiality assessments and dramatically increasingly energy efficiency while also growing its operation, Chief Sustainability Officer Kathrin Winkler said at the event on Thursday.

Such one-off examples of divorcing economic growth from environmental impacts illustrate the much bigger concept of a low-carbon economy.

Hewlett-Packard, meanwhile, emphasized the way it is setting in-house climate targets — particularly in a time of major turmoil.

“HP is going through a very unique and historic split," said Christopher Wellise, the company's head of global environmental progress. "Both companies going forward will be establishing science-based targets.”

In the case of younger companies, like the sharing economy companies that have updended the transportation industry, a fundamental re-thinking of how resources are utilized is in play.

Lyft and Uber are two big examples of billion-dollar startups that aim to reduce single-occupant car trips, cutting transportation emissions, but which some still eye somewhat warily in terms of emission reduction or undercutting public transit without adequately contributing to the tax base.

"What we’re doing is helping out caltrain," said Lyft Public Policy Manager Annabel Chang of the popular Bay Area commuter rail system. "About 22 percent of our rides in the South Bay are happening from a Caltrain station. People are truly using this as a first-mile, last-mile solution."

Still, there remains the underlying issue of drivers who may have inefficient gasoline-powered cars.

“One of the things we’re exploring internally is how do we incentivize drivers in a more coherent way," Chang said, floating the possibility of adding a line to driver pay stubs that says "you could have saved this much" driving a hybrid or an electric vehicle.