Editor’s note: This feature, originally published in Ensia, builds on Geoff Dembicki’s extensive reporting for Vice related to the potential for financial crises from climate change. Here, Dembicki further explores the problems and also looks at possible solutions. You can read his reports for Vice here and here.

There is a perverse and hidden danger from climate change that few people, even those who unquestionably accept the science, know how to deal with. Someday, likely sooner than we think, the destruction that warmer global temperatures are inflicting — through record floods, wildfires, droughts and hurricanes — could physically overwhelm our ability to maintain many communities in their existing form.

But by talking openly about this, and taking the necessary steps to address it, communities open the door to another danger. If markets suddenly value the risk of climate change properly, it could lead to a mass withdrawal (PDF) of investment that kills real estate values, dries up tax revenue and leads to a wider financial crisis.

That is the reality confronting Ted Becker, mayor of Lewes, Delaware, a town of about 3,000 people in which some buildings sit just steps from the Atlantic oceanfront. "When you live here every day, and you see things change, it’s hard to accept that climate change isn’t happening," he says. 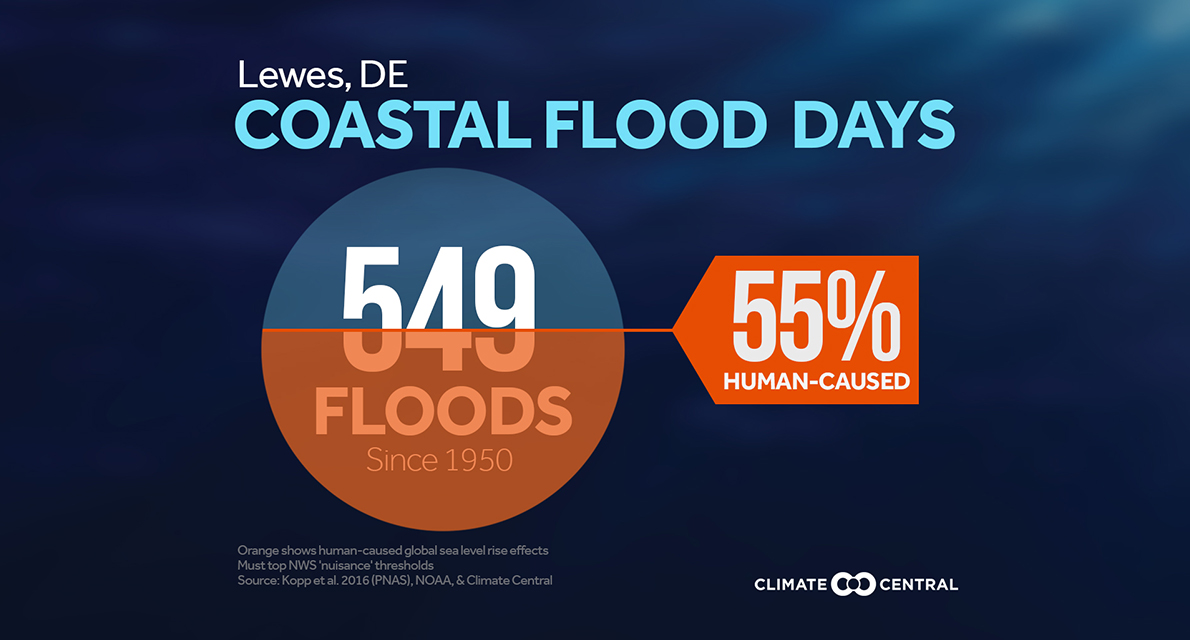 Flooding that can deluge low-lying properties and make roads impassable is becoming much more frequent. Of the 549 flood days in Lewes since the 1950s, more than 200 have taken place in the past 15 years. The town has rewritten building codes so homes in flood-prone areas are built higher off the ground. About a year and a half ago it took the more aggressive step of abandoning plans to develop several roads and properties in Lewes Beach, the mayor says.

The proportion of Delaware land area exposed to coastal flooding — 5.4 percent — is expected to grow to 7.1 percent within three decades because of rising seas. By then, just for the 771 homes built between 2010 and 2017, chronic flooding could imperil (PDF) $526 million worth of coastal real estate. The number of homes at risk could surpass 23,000 by 2100 in the worst-case scenario.

So far, neither investors nor homeowners seem to be fully incorporating this risk. But market forces could quickly alter this perception.

So far, neither investors nor homeowners seem to be fully incorporating this risk. "I’m not aware of anybody who has said I’m not coming here because of that," Becker says.

But market forces could quickly alter this perception — for example, if flood insurance were to more accurately reflect the costs of climate change or is scaled back in high-risk areas entirely. "Then I’m sure people will rethink whether or not they want to build in this area," Becker says. "I think that’s a challenge that’s out there." 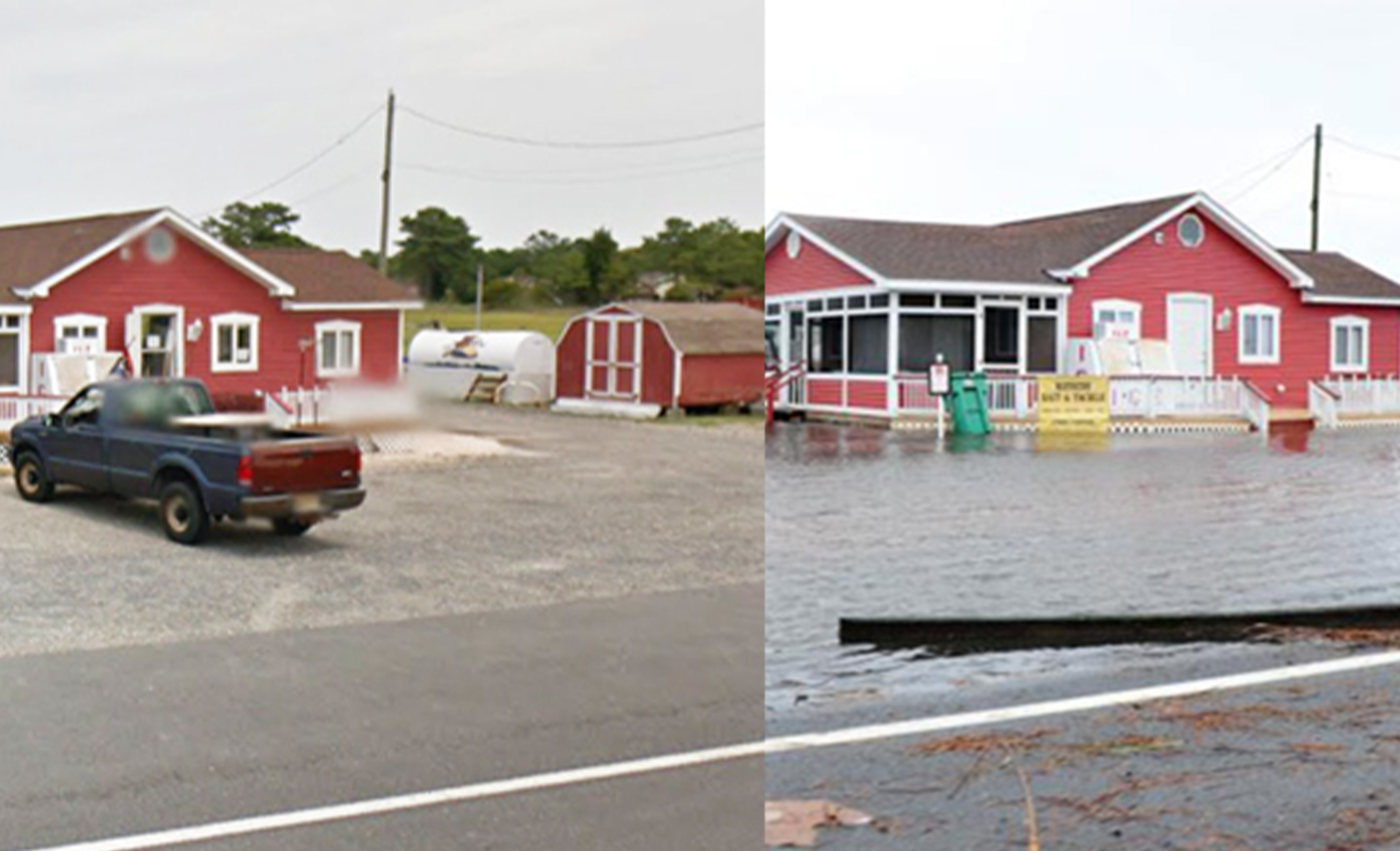 But the best way to improve our long-term odds of survival while preventing a near term financial fallout, they say, is to fully accept the dangers ahead. Communities that begin preparing for those dangers today will be much better positioned to thrive in a perilous 21st century than those that wait.

Last year, the Union of Concerned Scientists published a report giving a national context to the risks Lewes faces. About 147,000 coastal homes and 7,000 commercial properties across the U.S. worth $63 billion could be chronically flooded by rising seas within 15 years. That number might rise to 311,000 homes by mid-century. "That was something that we felt was just really flying under the radar," says Erika Spanger-Siegfried, senior analyst with the group’s climate and energy program.

Defensive measures such as seawalls can be prohibitively expensive and may have to protect long lengths of coastline to be effective. The reality that many homes and buildings will be difficult — or perhaps impossible — to defend against rising seas is only beginning to penetrate the mainstream awareness of investors, developers, insurers and elected officials. "By and large, it’s still fair to say that the majority of the [U.S.] coastline isn’t acting on this information," Spanger-Siegfried says.

The reality that many homes and buildings will be difficult — or perhaps impossible — to defend against rising seas is only beginning to penetrate the mainstream awareness.

But a sudden revaluation of market risk that leads to a pullout of investment isn’t necessarily desirable either. "When enough major market actors become aware of and begin to act on these risks, it could potentially trigger a regional housing market crisis, or even a more widespread economic crisis," the report reads (PDF).

This is why some policymakers have been reluctant to speak openly about chronic flooding. "When I was in the White House, there was talk of, ‘How much do we really want [these risks] to be widely known?’" Alice Hill, a former special assistant to President Barack Obama and a research fellow at Stanford’s Hoover Institution, has said. "It could be just a mass realization that all of this property is severely compromised. That would be highly destabilizing to real estate markets."

Spanger-Siegfried says policymakers have no choice these days but to deliberately, and carefully, scale back investment in the riskiest regions and redirect it to safer ones. It could mean the federal government permanently reduces flood insurance coverage, buys out homeowners in exposed areas and, in some cases, develops entirely new communities further inland. "This is going to be a really important policy frontier for us in the coming decades," Spanger-Siegfried says.

Edith Hannigan also stares down existential threats — but on the other side of the country. Originally from flood-prone New Jersey, Hannigan is a land-use planning program manager at the California Board of Forestry and Fire Protection. "I grew up in this flooding and stormwater protection context and now I work in wildfires, but it’s still kind of the same goals underlying my work," she says.

Fires are becoming more frequent and cataclysmic in California due to increasingly warm and dry conditions. Of the 20 largest that have charred the state since the 1930s, most have occurred in the past two decades. A record-smashing wildfire season in 2017 killed at least 46 people and left $20 billion in losses. Fires in 2018 killed nearly 100 people and wreaked $24 billion worth of damage. 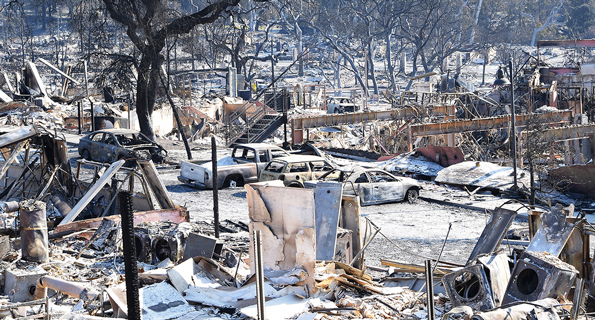 Hannigan sees a sharp increase in public awareness of fire risks. "You just can’t ignore it anymore," she says. She helps communities prepare for danger, especially those built where urban areas transition into wildlands. But even when communities take all the precautions — removing flammable trees, for example, or leaving 30 to 100 feet of "defensible space" (PDF) on each side of a home — they can still burn to the ground, as Santa Rosa’s Fountaingrove neighborhood did last year.

In March, Munich Re became the first major insurance company to explicitly link California’s wildfires to climate change. "If the risk from wildfires, flooding, storms or hail is increasing, then the only sustainable option we have is to adjust our risk prices accordingly," Ernst Rauch, the insurer’s chief climatologist, told the Guardian.

The real estate industry is watching closely. A new report from the Urban Land Institute warns that (PDF) some "locations, and even entire metropolitan areas, [can] become less appealing because of climate-change-related events, leading to the potential for individual assets to become obsolete."

Navigating these twin physical and financial dangers is potentially much harder in the case of wildfires than for coastal flooding, where risks are more predictable. "You don’t know how or where the next fire is going to strike," Hannigan says.

But if wildfires keep getting worse in California, as the climate science predicts, communities will have to take a hard look at "what type of risk they’re willing to put their residents in," Hannigan says. Still, she continues, when it comes to land-use decisions, "getting a mindset change at a large scale in California, probably anywhere in the country, is going to be a slow-going process."

That’s certainly true of tense negotiations, which began in 2015 and wrapped up in March, among seven Southwest U.S. states to respond to a 19-year Colorado River drought and prevent the federal government from imposing mandatory water restrictions. Climate change is a major factor in the river and its reservoirs' being at their driest period in 1,200 years.

A 2014 report from Arizona State University estimated that one year without water from the river could cause $1.4 trillion in economic losses and impact 16 million jobs across the region. If calculations were done again today, those estimates of damage "would definitely be bigger," says Timothy James, a co-author of the report. Deals reached this spring among Wyoming, Colorado, Utah, New Mexico, Nevada, Arizona and California resulted in states agreeing to take less water from the Colorado River basin. But this is just the beginning of a long-term process to figure out our survival in an era of escalating climate change.

"What would we do if we lived in a more water-constrained environment?" James says.

The technical fixes are easiest to predict: more water-efficient technologies and policies such as higher prices on water to encourage their adoption. But adapting to climate change also requires hard decisions about the pace and scale of development. It could mean refraining from building new communities in the desert altogether. At the moment, however, Phoenix is growing rapidly.

But for how long is debatable. Although a wet winter temporarily has eased fears that Lake Mead, a crucial reservoir along the Colorado River, could become dry enough to trigger its first shortage declaration next year, the close call puts into stark reality just how fine a line many places are walking as climate change becomes more intense. In this context, according to the Urban Land Institute report (PDF), "leading investment managers and institutional investors are undertaking flood, resilience and climate vulnerability scans of their portfolios" — including evaluating the financial risks of water stress and extreme heat.

Vulnerable cities such as Phoenix face not only looming water shortages, then, but also an investment flight that could potentially accompany them. How can communities properly respond to these sorts of dangers beyond mere short-term fixes? "You know, I don’t have a great answer," James says.

Soon enough, climate change could force us to provide one. 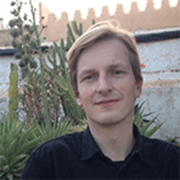