Can we solve the global energy ‘trilemma’?

Forget the noisy public battles over energy and climate change — deniers versus alarmists, free marketeers versus regulators, renewables versus fossil fuels. Those are sound bite sideshows that skirt a balancing act of unfathomable complexity: How to align seemingly conflicting interests, transitioning markets quickly but not overly disruptively, accommodating the needs of both winners and losers.

Among other things, it involves easing three billion citizens into the middle class in a measured but meaningful way, creating opportunity for all amid a world whose politics, economies and culture wars are fully capable of bringing the best ideas to a screeching halt.

The good news is that beyond the headlines and mudslinging is a rational conversation about our energy future, and how to balance competing needs and agendas.

That’s my observation after reading World Energy Trilemma — a trilemma is a difficult choice among three competing or conflicting options. The just-published report assesses the efforts by energy companies and policy makers to address the three-headed challenge of energy markets in a climate-constrained world: energy security (keeping the lights on), energy equity (enabling everyone to do so, regardless of income level) and environmental sustainability (doing this while addressing climate change and other issues).

The sixth annual report, published by the World Energy Council in partnership with global management consultancy Oliver Wyman, distils the views of a wide range of energy policymakers, investors in the energy sector and energy business leaders.

The document is one of what will likely be dozens of assessments of world energy and climate trends that will come out in the run-up to COP21 later this year, with the aim of informing the process, if not the outcome, of the world’s leaders’ negotiations on climate policy. 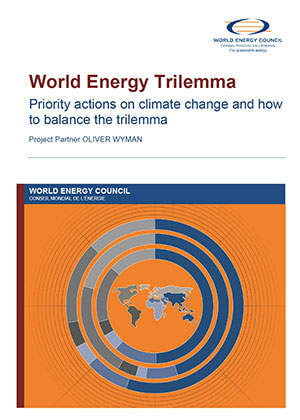 “This year we again reached out to the financial sector, to policy makers, to the energy industry to ask them: What do you need coming out of the COP negotiations? What do you need the policy makers to be aware of as they work on that negotiation to make sure that it will support everyone's efforts to balance the energy trilemma,” said Lucy Nottingham, Director of the Global Risk Center at Marsh & McLennan Companies, and a co-author of the report, when we spoke last week. (Oliver Wyman is a unit of Marsh & McLennan.)

A key finding of the report is the call from business leaders in the energy sector to be more involved in the climate change negotiations — and for them “to move away from the 'theology' of the commitments required from individual countries and towards a pragmatic approach with more focus on delivery of actions which can be measured and monitored.”

Easy to say, hard to do. But at about the same time the report was being released, six large European oil companies last week called on national and regional governments to set a price on carbon and for those regional carbon markets to be linked. It showed the shifting sands on climate and energy, where entrenched fossil-fuel interests are finding common cause with mainstream scientists and environmental activists on climate change.

Intractable problems, in other words, are possible when opposing parties' interests align.

The report identifies five enablers that are key to solving the energy trilemma:

1. Addressing barriers to technology transfer, such as tariffs on environmental goods and services, or lack of protection for intellectual property rights.

“Today, much clean energy equipment is taxed as it crosses national borders," says the report. "Those tariffs add to the cost challenge and make it more difficult and, in some instances, impossible to deliver zero- and low-carbon energy technologies. Tariffs not only raise the cost of any project that uses imported products, they also drive up the cost of production by making it harder to achieve scale. Ultimately, by reducing the size of a potential market, they undermine incentives for innovation in the clean energy area.”

2. Setting a global price on carbon would send a clear market signal to investors and, by leveling the playing field, redirect investments to low-carbon projects. To date, there are 18 environmental trading schemes at the national and sub-national levels, and 12 carbon taxation schemes implemented worldwide to meet GHG emissions reduction goals.

3. Sending the right policy signals that will encourage financing to flow. To support an energy transition and climate agreement, policymakers should be focused on how to attract more private capital and ensure that a pipeline of projects is developed. In collaboration with the public sector, the energy sector can work to ensure that bankable projects are brought forward.

“If the regulatory rules are devised adequately to provide a clear direction and stability, the financial markets will be able to respond and find innovative ways for clean energy financing.”

4. Managing energy demand as well as supply. This may seem counterintuitive coming from a group of the world’s biggest energy companies, but demand management and energy efficiency support progress in all three areas of the trilemma — security, equity and environmental sustainability. Progress is underway: In developed countries, energy-efficiency improvements have cut the effective demand for energy by 40 percent over the past 40 years.

In the rest of the world, however, it’s a different story.

“In developing countries, the focus on energy efficiency as a means to reduce CO2 emissions can be less of a priority than expanding energy access, affordability or security. …Yet an early and focused effort on energy efficiency can significantly reduce energy demand, increasing energy security and economic competitiveness.”

“Different technologies are playing out in parallel and the question is when they will start to more dynamically interact and reinforce each other. This is unclear and could be the biggest change. We will need to adapt and adjust to dynamics and innovations that we don’t anticipate yet.” 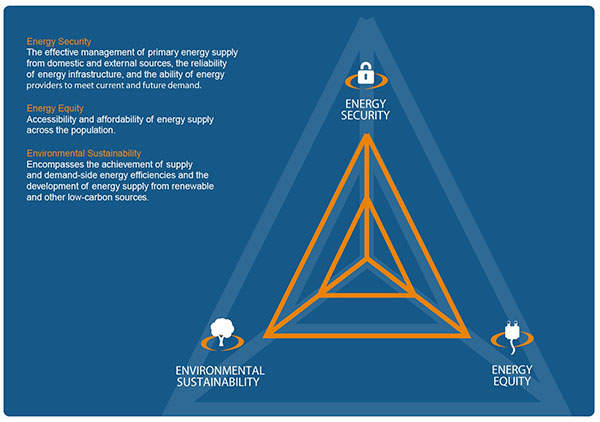 Two out of three?

I asked Lucy Nottingham whether the goal of balancing energy security and equity with environmental sustainability seemed even possible, given the competing agendas for economic growth and climate change mitigation.

“It's difficult,” she conceded. “You might not be able to make equal progress across all three areas all at once.”

Nottingham pointed to Germany’s record. “It's trying to improve the environmental sustainability of its energy and it is facing some cost issues with that, and possibly some security issues. So I think we're seeing at the moment that you tend to make progress on two, but not all three areas at once.”

Nottingham noted that in the interviews she and her colleagues conducted for the study, “There was a lot of emphasis on the need for increased dialog and communication between the policy makers and the financers to understand how business models might be changing and the new opportunities that it opens up.”

Those conversations are taking place, she said — notably, inside groups like the World Energy Council, a 90-year-old UN-accredited institution representing the entire energy spectrum, with more than 3,000 member organizations in more than 90 countries. They are also happening inside dozens of countries, as each tries to find localized solutions — not just at the national level, but in each state or province, based on local resources, needs and conditions.

The conversations will be brought to a head at this year’s COP climate change negotiations, but they won’t end there. Solving the energy trilemma will no doubt take decades, as policies and markets shift to simultaneously accommodate the three elusive goals.

“It's a very difficult path because they have to create policy and regulation that works,” says Nottingham. “It's putting the right incentives in place while technology is changing. The infrastructure is aging in a lot of places, or doesn't exist. It's a massively difficult needle to thread and there are a lot of very smart people working very hard. But it is a very difficult thing to thread through.”

She concludes: “There is this perfect storm of challenges that the industry is trying to face. And trying to find the right answer while keeping the lights on is not easy.”