The world’s nations are nowhere near to meeting the global Paris Agreement’s goals on climate change of holding global temperature increases to 2 degrees Celsius compared to 19th-century averages, much less its more aspirational goal of holding temperatures to a 1.5 C rise.

The most recent Emissions Gap Report from the United Nations Environment Program notes "global greenhouse gas emissions show no signs of peaking." According to another study, the chance that humans can limit warming to no more than 2 C by 2100 is no more than 5 percent, and it’s likely that temperatures will rise somewhere between 2.6 C and 3.7 C by the end of the century.

These foreboding trends have led to an increasing focus on ways to remove carbon dioxide from the atmosphere. Among the methods being explored is the use of the ocean to absorb and/or store carbon by adding crushed rocks or other sources of alkalinity to react with CO2 in seawater, ultimately consuming atmospheric CO2.

We and other (PDF) researchers see the ocean as a logical place to look for additional carbon dioxide removal opportunities as it currently passively absorbs about 10 gigatons (10,000,000,000 tons) of CO2 per year or about one-quarter of the world’s annual emissions. In addition, the oceans contain vastly more carbon than the atmosphere, soils, plants and animals combined, and may have the potential to store trillions of tons more.

However, there are a number of concerns about the potential negative impacts of large-scale deployment of BECCS and other land-plant-based methods, notably the worry that huge amounts of agricultural land would be diverted to grow dedicated crops. This could reduce access of low-income populations to food, place demands on water (PDF) and have serious negative impacts on biodiversity due to ecosystem disruption.

Perhaps the best-known — and at times, controversial — method for marine carbon dioxide removal is stimulating photosynthesis to increase CO2 absorption. For example, in regions where marine plant growth is limited by iron, this element can be added to enhance CO2 uptake and carbon storage where at least some of the biomass carbon formed eventually sinks to and is buried in the ocean floor. Other approaches include restoring, adding or culturing marine plants or microbes, such as Blue Carbon.

Another technique being considered is to try to accelerate the chemical reaction of CO2 with common rock minerals, a natural process known as mineral weathering. When rain reacts with alkaline rocks and CO2, there’s a chemical reaction, which can be catalyzed by biological activity in soils, that converts the CO2 to dissolved mineral bicarbonate and carbonate ions which then typically run off into the ocean. Mineral weathering plays a major role in removing excess atmospheric CO2, but only on geologic time scales (PDF) — 100,000 years or more. 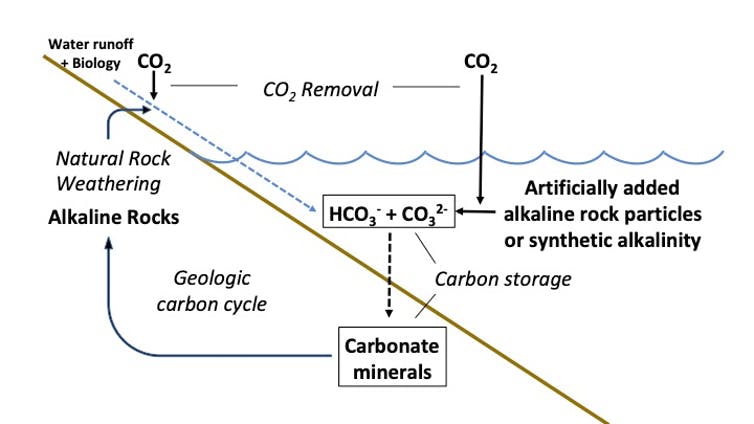 Such ocean alkalization could be achieved via distribution from shore or by ships. Another proposal is to manufacture alkalinity at sea using local marine energy sources: for example, employing electricity derived from the ocean’s very significant vertical temperature gradient. Reacting waste CO2 with minerals on shore and then pumping the resulting dissolved alkaline material into the ocean is also an option. All of the preceding simply would add to the already vast bicarbonate and carbonate reservoir in the ocean.

An additional benefit of ocean alkalization is that it also helps counter ocean acidification, the "other CO2 problem" (PDF) stemming from the ocean’s absorption of excess CO2 from the air. Acidification can interfere with the ability of calcifying organisms, such as oysters, clams and corals to construct their skeletons or shells, as well as impact other pH-sensitive marine biogeochemical processes.

What we don’t know

Considering the logistics, cost and impacts of extracting or manufacturing alkalinity and dispersing it, studies estimate that air CO2 drawdowns (PDF) of perhaps 30 parts per million or less might be realistic. This would be helpful given that the level of CO2 in preindustrial times was 260 to 270 parts per million and is now 410 parts per million.

We calculate a global drawdown of atmospheric CO2 by 30 parts per million would require near-zero emissions from human activities, plus the removal and storage of some 470 gigatons of CO2. To achieve this, a minimum of roughly 500 gigatons of rock would need to be used to generate the required alkalinity. Current global rock extraction is on the order of 50 gigatons per year, so holding other rock uses steady while increasing this extraction rate by 50 percent theoretically could allow us to achieve the drawdown in 20 years. This obviously needs to be tested at vastly smaller scales to determine what global capacity and rates might be realizable.

Nor is this just a matter of alkalinity production; the potential negative impact of ocean alkalization on marine ecosystems needs to be considered. In addition to the effects of pH and alkalinity elevation (either instantaneous or gradual), alkalinity addition likely would carry with it other elements or compounds, such as trace metals and silica, that can also affect marine biogeochemistry. Little research has been conducted on these points, but the results so far generally find no or positive effects on marine life. Further investigation is needed to fully understand the environmental and ecological consequences, including conducting small and medium-sized field trials.

Any deployment would need to be subjected to strict monitoring requirements to assess both the environmental benefits and well as the negative impacts of large scale deployment. Some measure of confidence in the use of ocean alkalization might be found in the fact that natural mineral weathering and alkalinity delivery to the ocean naturally has occurred for billions of years (currently at the rate of about 1 gigaton of CO2 consumed and stored per year), apparently with the marine ecosystem well adapted to if not requiring this input. Nevertheless, the possibility of significantly and safely scaling up this natural process requires further research.

At a legal level, countries would need to address international governance issues associated with this approach. Presumably, the Paris Agreement would be involved given its focus on addressing climate change. Any role ocean alkalinity could play in countries’ pledges to mitigate emissions would require provisions that mandate assessment of potential impacts of deployment. The Paris Agreement could facilitate this given its references in various provisions to the need to assess the impacts of response measures in the context of ecosystems, sustainability, development and human rights.

Ocean-focused regimes such as the Convention on the Prevention of Marine Pollution by Dumping of Wastes and Other Matter and the Law of the Sea Convention (PDF), and its Protocol (PDF), also might seek to be engaged in assessment and regulation, as well as the Convention on Biological Diversity. Coordinating the potential interventions of all of these regimes’ responses would be another challenge posed by deployment of ocean alkalinity, as would the many other carbon dioxide removal approaches that could have transboundary impacts.

The specter of potentially catastrophic climate change by the end of the century has stimulated interest in an array of new technological options to remove CO2 from the ocean and atmosphere at large scale. But they could also pose risks of their own. Adding alkaline materials to speed up mineral weathering is one such approach that deserves serious consideration, although only after thorough scrutiny.

See all by Wil Burns