Carbon policy conundrum: Why politicians must show leadership in their own jurisdictions now

Deep decarbonization only happens if every polluter pays, not just the environmentally conscious.

The following is an excerpt from "The Citizen's Guide to Climate Success: Overcoming Myths that Hinder Progress" by Mark Jaccard (Cambridge University Press, 2020). Reprinted here with permission from the publisher. 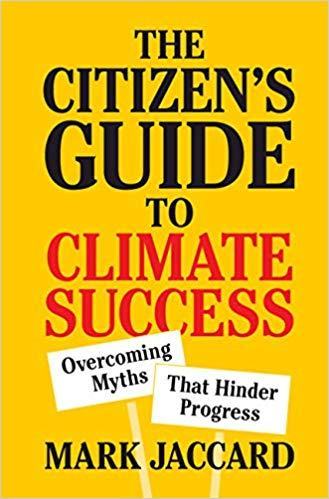 Deep decarbonization is a global collective action problem. Over the next decades, we need wealthier countries to rapidly decarbonize and developing countries to slow and then reverse the growth of their emissions. For this, we must have an international enforcement mechanism, probably carbon tariffs, to ensure that politicians in individual countries cannot win elections by promising to abandon their countries’ efforts and free-ride on the efforts of other countries. Without such a mechanism, global decarbonization won’t happen.

Since this mechanism is unlikely to result from consensus-based international negotiations, its emergence depends on leadership by a group of motivated countries — a climate club — that implement domestic decarbonization policies and together establish a system of carbon tariffs. Ideally, wealthier countries would transfer revenue from their tariffs to support adoption of low-GHG technologies in developing countries, but we can’t bank on an increase in international generosity from the voters of wealthier countries.

Yet for almost three decades, international negotiators have pursued a voluntary agreement in which all countries agree on their reductions, and on the ﬁnancial and technological transfers from wealthier to poorer countries. This approach’s continued failure will most negatively impact the poorest people in the poorest countries. They and their governments are least able to withstand increasing droughts, wildﬁres, ﬂoods, diseases, crop failures, hurricanes, heat waves, ocean acidiﬁcation, and sea-level rise. An intensifying global crisis, including mass migrations of climate refugees, awaits us if we cannot quickly replace international wishful thinking with international realpolitik. An enduring global effort is unachievable without enforcement mechanisms that will be objectionable to some countries, at least initially.

An intensifying global crisis, including mass migrations of climate refugees, awaits us if we cannot quickly replace international wishful thinking with international realpolitik.

Politicians showing leadership in their own jurisdictions must also replace domestic wishful thinking with domestic realpolitik. They must understand that explicit carbon pricing favored by economists will rarely play the lead role in energy system transformation. Politicians who promote carbon pricing as lead policy are an easy target for opponents who deceive voters by promising lower gasoline and electricity prices and magically reduced GHG emissions.

When viewed from the perspective of political acceptability, ﬂex-regs outperform carbon pricing, especially in the early stages of the energy transformation. But even ﬂex-regs aren’t easy to implement at stringent levels. They meet concerted resistance from fossil fuel companies, electric utilities, vehicle manufacturers and other interests. For a government trying to lead on climate-energy policy, however, it is less difﬁcult to overcome these sector-speciﬁc corporate interests, which themselves are not particularly popular, than to survive the anger of voters in key electoral districts who succumb to lies trumpeting the punitive nature and ineffectiveness of carbon pricing.

Energy transformation is also difﬁcult because its short-term costs are concentrated in regions that rely on fossil fuels for electricity supply, such as the U.S. Midwest with coal-ﬁred power, or regions whose economies are highly dependent on fossil fuel development and export, such as Texas. Some people in these regions experience climate action as an attack on their livelihood, and are therefore vulnerable to the argument that climate scientists distort evidence.

As we know from the experience with smoking and lung cancer, myths based on our perceived self-interest and convenience are hard to undermine.

Challenging this myth with evidence and logic is difﬁcult, as we are all susceptible to biases that align with our self-interest, especially when these are reinforced by well-funded misinformation campaigns. Over the last 20 years, advocates for climate-energy policies have tried various narratives to shift the views of the climate science skeptics. Will their views shift if we better explain the science? Or if scientists talk more about catastrophic outcomes? Or if we emphasize the co-beneﬁts of GHG reduction, such as improved air quality? Or if we trumpet the innovation and jobs created by renewable energy? Or if we use carbon tax revenues to compensate fossil fuel-dependent regions and retrain workers in a "just transition" strategy?

Unfortunately, no storyline has emerged as the silver bullet for countering climate science skepticism. As we know from the experience with smoking and lung cancer, myths based on our perceived self-interest and convenience are hard to undermine. Decades of accumulated scientiﬁc evidence slowly changed beliefs. Finally, public views on the risks of smoking passed a tipping point to reach wider acceptance. Climate science views may have reached a similar stage, in part because, as with smoking, some impacts are now obvious and immediate. But a signiﬁcant percentage of people will still deny the science, or reject the need to act. If these action-resistant views align with political partisanship, as in the U.S., rising public acceptance still might not lead to effective economy-wide policies. Focusing on key sectors and less difﬁcult policies is especially important in this context.

Even if most people in a fossil fuel-endowed region may accept the climate science, those whose ﬁnancial interests align with expanded production are motivated to convince themselves and others to accept their project: it produces only a tiny percentage of global emissions; it is essential for our economy; it is cleaner than others; it will help the developing world. These rationales hinder people from "connecting the dots" — realizing that the long lifespans of new fossil fuel projects far exceed the short timeframe for global decarbonization.

Fossil fuel-endowed regions would beneﬁt if some of their trusted leaders questioned the prudence of doubling-down on coal, oil, and even natural gas. Such visionaries would argue that fossil fuel expansion increases their region’s economic vulnerability to the future time when humanity ﬁnally accelerates on the decarbonization path. Unfortunately, such regions tend to produce political and corporate leaders who perpetuate the myth that they can thrive indeﬁnitely on the fossil fuel path, simply by repelling attacks from environmentalists, foreign billionaires, Hollywood celebrities, and neighboring jurisdictions. This is why, sadly, sudden economic decline is the more likely future for most fossil fuel-dependent regions.

Fortunately, one myth that has kept humanity on the rising GHG path is fading. While some people still believe peak oil is nigh, it’s now difﬁcult to convince anyone that imminent oil exhaustion obviates the need for decarbonization policies. Technological advances of the last 15 years, notably the fracking and horizontal drilling that enable oil and gas extraction from shale rock, have greatly increased estimated global reserves. The price of oil may still jump at times, being a valued commodity vulnerable to geopolitical crises, and this may rekindle peak oil concerns. But we can now confront peak oil catastrophists with the crescendo of climate-related disasters to convince them that the priority must be stringent climate-energy policies. And we can note that such policies will, serendipitously, cause oil production to peak long before we run out — peak demand preventing peak oil.

As carbon pricing or regulations that phase out coal and gasoline increase in stringency, they spur behavioral change, energy efﬁciency, and renewable energy, and other policies can reduce inequities within and between countries. But our pursuit of these laudable objectives must not retard energy system transformation. If we argue, in spite of the evidence, that energy efﬁciency is cheap and easy, we inadvertently reduce the pressure on politicians to enact regulations or carbon pricing.

The same good intentions that motivate efforts to change consumer behavior also motivate the practice of offsetting. Feeling helpless with the ineffectiveness of climate policy, some of us purchase offsets. The sentiment is worthy, but the outcome is not, for many carbon offsets have little effect on emissions. We should instead consider contributing our offset money to the politicians and campaigns that demand the regulatory and pricing policies we know are essential. Deep decarbonization only happens if every polluter pays, not just the environmentally conscious.

Many people are rightly bullish about renewables, especially given the falling cost of wind turbines, photovoltaic panels, and the batteries, gas turbines, and other technologies that enable these intermittent sources to provide reliable electricity. But fossil fuels will not be swept away by market forces in the absence of rising carbon prices or stringent regulations. Renewable portfolio standards and tax credits in the U.S., producer subsidies and regulations in Europe, and government support in China have caused the dramatic growth in wind, solar, and other renewables. The stringency of these policies needs to increase because when they cause a declining demand for coal and oil, they also cause declining prices for these commodities, which slows the market penetration of renewables. This is why renewables advocates must demand stringent climate-energy policies. Proclamations that renewables are already cheaper are welcomed by fossil fuel advocates, helping them convince politicians that politically difﬁcult policies can be avoided, thus slowing or preventing decarbonization.

While I am sympathetic to arguments that the global economic system should do much better in terms of equity within and between countries, attaching ambitious agendas to the deep decarbonization project only increases the difﬁculty of what is already an extremely difﬁcult task. The resulting failure on climate makes global inequity even worse, since it is the poorest people who are most adversely affected, and this is already happening. Radical transformation of our economic system and our social relations, desirable as these may be for some, are not essential for deep decarbonization, as several GHG-reducing jurisdictions are demonstrating.

See all by Mark Jaccard