The Carbon War Room today launched a new consortium that aims to cut through the Gordian knot of barriers that has made it tough to finance commercial building retrofits. In the process, the groups involved hope to pick off billions of dollars worth of the lowest-hanging fruit of building energy efficiency.

The Carbon War Room's approach opens the door to zero-upfront-cost deals for mid- and small-scale retrofits, where in the past only a limited group of larger projects could land financing for such deals.

To turn this trick, the new plan upgrades an existing financing model known as PACE. It also relies on private capital, rather than public subsidies.

"This is game changing. It has the potential to solve the problem of the commercial retrofit market that has lingered for 35 years," said Jigar Shah, CEO of The Carbon War Room at the BusinessClimate 2011 event today in New York City.

Across the country, older buildings are ripe with some of our economy's largest concentrations of energy waste, and thus offer some of the least-costly fixes. Improving the world's building stock offers the opportunity to save 5 gigatonnes of greenhouse gas emissions per year, and amounts to a $2.5 trillion investment opportunity, said Shah.

Dubbed PACE Commercial Consortium, or PCC, the approach brings into alignment the interests of a series of players that in the past have failed to find the right profit motives, risk levels, or technologies to get beyond one-off, complex deals to finance major green commercial retrofits.

For commercial building owners, the PCC offers a turnkey model that delivers financing, the building upgrade and deal insurance, all paid through a increased tax assessment that is more than offset by reduced energy costs.

The players debuting today with the PCC's first round of deals are:

The new program builds on an older model of retrofit financing known as the property-assessed clean energy program, or PACE. As pioneered in California in 2008, PACE legislation enables property owners to accept a voluntary tax assessment as a means of repaying upfront financing of energy efficiency and renewable energy improvements. Twenty-six states in the United States have enacted legislation enabling the secure and scalable financing PACE structure.

Because they are repaid alongside tax assessments, PACE assessments are already considered a very low risk financing option. The PCC goes further in a number of ways, according to Murat Armbruster, a senior advisor who led the Carbon War Room's involvement.

First, PCC lowers the risk of retrofit deals by having Energi insure the energy savings contracts that Lockheed signs with building owners. With reduced risk on the payment stream derived from these energy savings deals, Barclays Capital and Ygrene Energy Fund can offer lower-cost funding by bundling a number of these deals into an investable asset sought out by pension funds and institutional investors.

How do the players make money in this complex relationship? Here, I'll crib from the New York Times, which has the best explanation of this process I could track down. (There's also a graphic from Ygrene at the bottom of this post showing the process graphically.)

Ygrene and its partners will gain exclusive rights for five years to offer this type of energy upgrade to businesses in a particular community. They will market the plan aggressively, helping property owners figure out what kinds of upgrades make sense for them. Lockheed Martin is expected to do the engineering work on many larger projects.

Short-term loans provided by Barclays Capital will be used to pay for the upgrades. Contractors will offer a warranty that the utility savings they have promised will actually materialize, and an insurance underwriter, Energi, of Peabody, Mass., will back up that warranty. Those insurance contracts, in turn, will be backed by Hannover Re, one of the world's largest reinsurance companies.

As projects are completed, the upgrade loans, typically carrying interest rates of 7 percent, will be bundled into long-term bonds resembling those routinely issued by governmental taxing districts. Barclays will market the bonds. Retirement funds have expressed interest in buying these bonds, which will be repaid by tax surcharges on each property that undergoes a retrofit.

At a time when public funding for green retrofits is drying up, tapping private capital pools holds great allure. "These investments are 100 percent private capital. There is no government debt or cost involved. The markets can supply this financing because the economics are sound, engineering performance is insured, the security is strong, and clean energy capital assets are profitable," said Brian McCarthy, CEO of Energi Insurance Services in a prepared statement.

In the deal announced today, the Carbon War Room unveiled details about the size and location of the first round of investments to be place: $650 million in PCC deals will be focused on two commercial markets.

First, Miami-Dade County, Fla., a market estimated to have $550 million in retrofit funding potential. This funding can, in turn, generate up to $1.8 billion in economic activity in the Miami-Dade region.

The second site the consortium is focusing on in this first round is the city of Sacramento, Calif. where there's an estimated $100 million market and another $530 million in potential economic activity.

As a side note, least year, the Federal Housing Financing Agency (FHFA) -- which oversees Fannie Mae and Freddie Mac -- issued a letter that all but froze PACE financing for residential mortgages.

However, because they are not backed by the housing agency, commercial PACE deals were not impaired by the ruling. That said, the ruling has had a broad chilling effect on PACE backed business models. In the meanwhile, court challenges to FHFA's ruling are proceeding in California and elsewhere. 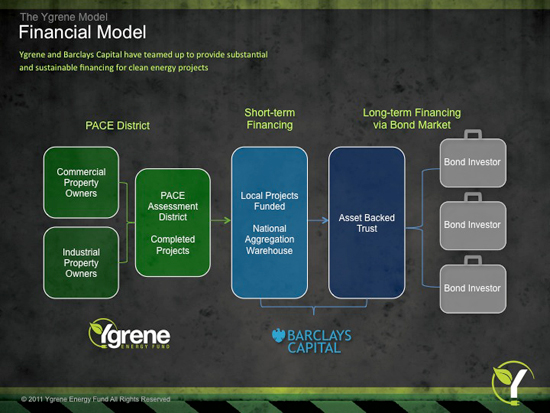