The case for designing a circular battery

As lithium-ion batteries become increasingly commonplace — powering everything from cell phones and laptops to electric vehicles and energy storage for renewables such as wind and solar — there is a looming question about what to do when they reach the end of their useful life.

Recycling is an option, although not currently an easy one because of the difficulty of recovering high-value materials. While recycling rates are expected to increase as technology and processes improve, some batteries may have the opportunity to be recovered and reused for another purpose before even reaching the stage of recycling: a second life.

(Source: Bloomberg NEF 2019 Electric Vehicle Outlook) While there may be short-term fluctuations, we continue to expect further decreases in battery prices, falling from $176/kWh at the pack level today to $87/kWh in 2025 and $62/kWh in 2030.

Electric car and bus battery packs are often swapped out when they still have significant life remaining, sometimes up to 70 percent of their initial capacity. This is because vehicles have very high power needs. So while these used batteries may not be suitable for powering another electric vehicle, they may function perfectly well for energy storage at a commercial scale, providing back-up power to an office building or powering telecommunication towers, as several examples. Doing so not only extends the life of these batteries before they are recycled or landfilled but also can increase their overall value.

The challenge lies in the fact that these electric vehicle batteries were designed with one purpose in mind: to power high-performing vehicles over a relatively short lifespan. As these batteries are repurposed for a second life, major technical and regulatory issues need to be overcome.

What if we could design a battery purposely built to start its life in an electric vehicle, transition to providing energy storage for a large renewable energy project and finally be repurposed for back-up?

On the technical side, battery packs typically need to be stripped down to their component cell level, tested for viability and then rebuilt for their new application. This adds significant cost and manufacturing waste.

On the regulatory side, there is legal uncertainty around who is responsible for these second-life batteries. Should a battery fail when it is in its second life — or worse, explode and cause damage to others — is the original manufacturer held liable or has that risk transferred on to a secondary manufacturer who may have been the one to repurpose that battery? Can a warranty be provided for a battery in its second life?

The inherent issue lies in design. Without batteries being intentionally designed for multiple uses from the start, these and other challenges will remain.

The principles of circular design, as promoted by groups such as the Ellen MacArthur Foundation and IDEO, can provide a framework for rethinking lithium-ion batteries. What if we could design a battery purposely built to start its life in an electric vehicle, transition to a second life providing energy storage for a large renewable energy project and finally be repurposed in a third life providing back-up emergency power to a commercial office building? When this battery exceeded its useful life, which would be designed to last far longer than the batteries of today, it would be recycled into its elemental parts to become feedstock for a new battery pack in a closed-loop system. 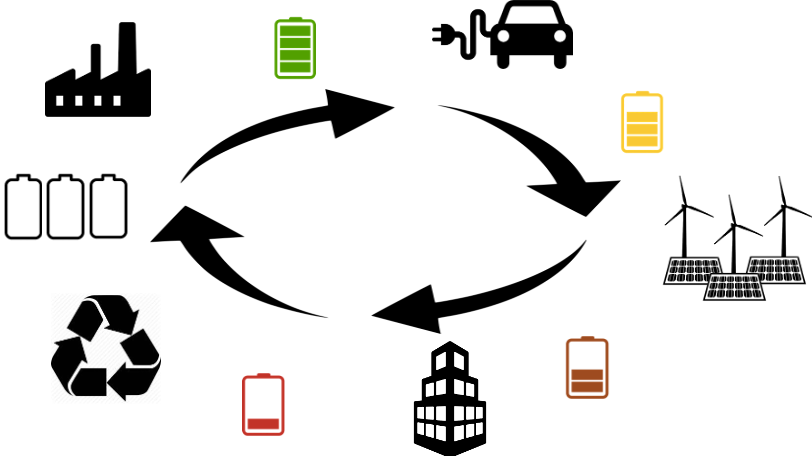 This challenge will be realized in part by moving towards a universal design for lithium-ion batteries, one that can be more easily swapped in and out for different applications. Similar to the USB plug that is compatible with a range of handheld electronics, this battery will be more of a commodity — widely available, interchangeable and reusable. Although this may consolidate the battery industry into favoring fewer and larger entities, it also will open the door to new business models, specifically energy storage-as-a-service whereby a single entity may own the battery throughout its life and rent it out for various uses.

Such a battery does not yet exist, although early concepts are being tested. However, in order for lithium-ion batteries to meet the expected demand over the coming decades without significantly increasing our use of natural resources and straining the environment, a battery designed for a more circular economy is essential. Without it, a revolution in clean energy is not possible.

Ford, GM Offer a Peek at the Latest in EV Battery Research

The final stop for EV batteries from Hyundai, Kia, Toyota, Nissan and BMW? The grid