The case for investing in direct air capture just got clearer

The level of funding needed to accelerate and commercialize solutions is actually much less than what's being spent already on other energy technologies at the federal level.

The idea of removing carbon dioxide from the atmosphere as a method of combating climate change is nothing new. For the past 20 years, climate experts have included this strategy in their models showing theoretical pathways for avoiding catastrophic climate change — all of that data has been calculated based on the ability of plants to capture and store carbon in their biomass.

Now, an entirely engineered solution is gaining ground among climate scientists, engineers, venture capitalists and oil majors alike. This set of technologies, called direct air capture, or DAC, refers to machines that remove carbon dioxide from the ambient atmosphere. Whereas plants use photosynthesis to convert sunlight and CO2 into sugar, DAC systems use low-carbon energy to remove carbon from the atmosphere with fans and filters. Although the concept is relatively simple, actually removing and purifying a gas that only makes up 0.04 percent of our atmosphere has been a challenge.

Engineering challenge aside, the economic and political pieces required for this technology to take off are beginning to fall into place. Carbon Engineering, a leading DAC company, published a report (PDF) a little less than a year ago suggesting they could remove and store CO2 for under $100 per ton. Thanks to some recent U.S. policy developments, companies such as theirs can receive a $35-$50 tax credit for each ton of the CO2 they remove. At the same time, private investments in the technology are nearing $200 million. For a technology very much still in its infancy, this kind of momentum is key.

Plants have spent billions of years mastering photosynthesis, while we have only a few decades to develop and deploy hundreds of our own carbon-removing plants.

But do we actually need direct air capture to meet our climate goals, and if so, what will it take to get this technology to commercialization? A recently published report by Rhodium Group makes the first projection of the need for DAC alongside other carbon removal and mitigation strategies at the domestic level. This alone is monumental, as carbon removal is no longer being treated as a unified approach to climate mitigation, but as a set of distinct approaches with their own costs and advantages. Moreover, the report helps to inform whether DAC options are considered a crucial part of our climate solution or a distraction from more effective technologies.

Do we actually need DAC?

The report demonstrates that despite the "break-neck" progress we’ve seen in electrification, energy efficiency, decarbonized electricity and other carbon removal approaches, the United States won’t easily meet — let alone exceed — the targets outlined by the Paris Agreement without direct air capture. According to the report, to get there the United States will need to suck between 185 and 1850 million metric tons of CO2 per year from the atmosphere with DAC by 2050. For context, this is roughly 4 percent to 37 percent of 2017 U.S. CO2 emissions.

That’s no small feat. Currently, even the largest DAC facilities in operation remove only thousands of tons of CO2 per year, and the maximum capacity for the facilities described in the report is 1 million metric tons per year. While these figures may seem daunting (and they are), these results offer confirmation that significantly greater federal and private research and development will be required to install the number and scale of facilities recommended in the report.

So, given the task at hand, what can we do (quickly) to support DAC technologies?

In addition to projecting the future need for direct air capture, the report proposes a variety of research and development projects that could help commercialize and scale the technology. The report draws upon a recent National Academies of Sciences, Engineering, and Medicine report to recommend an average of $240 million annually in new federal research and development funding for direct air capture over the next decade. There is reason to think this level of funding is achievable: Not only does spending of that level have strong precedent, it’s actually much less than every other energy technology program currently funded by the Department of Energy. 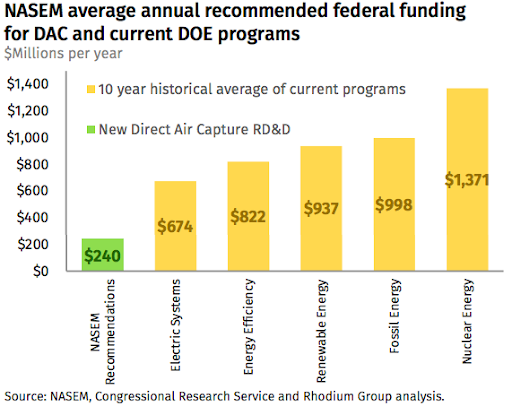 So while the research and deployment rate required to scale DAC to a level where it can help us achieve our climate goals is intimidating to say the least, the federal funding required to get us there may be substantially less than what’s been spent developing renewable or low-carbon energy technologies. Better yet, with total historic federal spending on DAC at a mere $11 million, this year’s Energy and Water appropriations bill (PDF) takes a symbolic step forward by providing $10 million for DAC research and $30 million for research on carbon storage and use in 2020 alone.

Rhodium Group’s report offers much-needed certainty on the need for DAC technologies while also issuing a significant challenge. Plants have spent billions of years mastering photosynthesis, while we have only a few decades to develop and deploy hundreds of our own carbon-removing plants. The path to commercialized DAC will be costly and expeditious, but the steps are clearer than ever.

See all by Rory Jacobson