In the wake of the Flint crisis, communities turn to innovative technology and financing to prevent the next crisis.

This article was first published on Ensia.

People in developed countries turn on the tap and safe drinking water flows, a dramatic health benefit they tend to take for granted. That complacency dramatically was disrupted last year when children in Flint, Michigan, started testing positive for lead poisoning and the source was traced to tap water.

But Flint shouldn’t have taken anyone by surprise; in fact, water industry professionals have been sounding the alert for years.

Much of the water infrastructure in the developed world was built 70 to 100 years ago and is nearing the end of its useful life. The American Water Works Association said we have entered "the replacement era," in which we must rebuild "the water and wastewater systems bequeathed to us by earlier generations." Most pipes, depending on their materials and the environment in which they reside, have a lifespan of 60 to 95 years. Treatment plants’ mechanical and electric components can serve 15 to 25 years. Without prompt upgrades, we are likely to see deteriorating water quality, with more incidents of lead or arsenic poisoning and bacterial and viral contamination, and increasing numbers of leaks disrupting water service and leading to costly emergency repairs.

In 2013 the American Society of Civil Engineers gave the U.S. drinking water system a grade of D. Across the United States, 240,000 water mains burst a year, or about one every two minutes. Every year, more than 41 billion cubic yards of treated water are lost to leaks around the world — enough water to serve almost 400 million people, according to the World Bank. And although drinking water in the United States remains quite safe overall, contamination with bacteria or viruses regularly makes people sick. In 2011–2012, the nation saw 32 drinking water–associated disease outbreaks, causing 431 cases of illness and 14 deaths, according to the Centers for Disease Control and Prevention.

'Treating citizens like a sensor,' as Sullivan puts it, is particularly popular in developing countries.

Upgrading the more than 1 million miles of drinking water pipes in the U.S. — along with other water infrastructure — and expanding systems to meet the needs of a growing population is projected to cost more than $1 trillion over the next 25 years, according to the AWWA. Although the financial investment required is mind-boggling, putting off upgrades can mean degraded water quality from leaky pipes or outdated treatment facilities, service interruptions and even higher costs: It’s much cheaper to prevent a leak than to fix water damage afterward in moldy buildings or buckled roads.

To perform targeted triage, new technologies — sensors, smart meters and data management platforms — are helping water managers to make informed decisions about how to allocate precious funds and stay ahead of problems.

"We preach asset management. Don’t just replace x percent of pipes a year," said Tommy Holmes, legislative director of AWWA. "Do an analysis of your system and choose which 2 percent of pipes need to be replaced, rather than just focusing on a geographic area. You want to replace pipes on the verge of failure first."

Helping to make these strategic decisions are water meters, which are going high-tech.

Cities are beginning to install smart meters at customers’ houses and businesses to measure water use. Because advanced meter infrastructure (known in the business as AMI) can transmit data about water consumed via wireless technology to central offices in real time, it can "tell you a lot more than just water usage," said Ken Thompson, deputy director of intelligent water solutions for CH2M, a global engineering company based in Colorado that helps municipalities plan upgrades to water infrastructure, choose technologies and integrate equipment into a single management system.

Thompson said that AMI meters can find leaks on the customer’s property by spotting unusual usage patterns. They can also zero in on pipeline breaks under the street, which create suction and draw water out of residents’ houses. "If you see a cluster with a backflow problem, there’s probably a pipeline break on that street," said Thompson. Using that data, managers can calculate the location of the break and fix it promptly before it damages nearby houses and roads.

Sensors are another key component of modern water infrastructure, used to detect both leaks and contamination. Water passes directly over the sensor, which is designed to measure specific chemical characteristics of the water. The sensor is contained in a cylindrical case, usually made of metal or plastic and 8 to 12 inches long, that can screw directly into a pipe. The cylinder also contains electronics for data collection and communications.

For its water management systems, CH2M typically uses three types of sensors, said Thompson. Drinking water has a standard chemical profile, so the sensors are designed to spot deviations, rather than test for individual pollutants. If the sensors flag an aberration, that alerts water managers to test the water to determine the cause of the change and whether it’s harmful to public health.

"There are hundreds of thousands of compounds," said Thompson. "You can’t look at everything."

The sensors CH2M’s clients use typically cost a couple of thousand dollars each, said Thompson. A larger utility such as the one that serves Dallas, Texas, might use 10 to 20 sensors, he said, while a really small one serving a few thousand people "might get away with one or two."

Ultimately, customers likely will have to pay more for water so utilities in turn have the funds they need to replace aging infrastructure.

Researchers are achieving this dramatic price slash by miniaturizing the sensors (to about the size of a sesame seed) and using low-cost materials and manufacturing methods. "It’s like fabricating sensors using an ink-jet printer as opposed to highly specialized manufacturing," said Yuyitung. "They are reducing the components so that it can be mass produced cheaply."

McMaster engineering professor Jamal Deen and his team, including fellow engineering faculty members Raja Ghosh and Ravi Selvaganapathy, have developed chemical sensors that can detect chlorine and pH in drinking water. On top of the basic material, they can apply different chemical interfaces so the sensors can test for a variety of pollution issues. In the future, this innovation in sensors might make these technologies an easier reach, particularly for small water utilities. In the U.S., 84.5 percent of community water systems serve fewer than 3,300 people.

Because the sensors are cheap and can communicate wirelessly, they also can be used to help ensure safe drinking water in small, remote communities not yet connected to a municipal water treatment system, such as First Nations communities in Canada’s north or rural villages in India.

New water infrastructure is required to meet the needs of growing populations worldwide, but even before it’s built, communities can benefit from technologies that measure the quality of their water. People living off the water grid might use the sensors to test their lake, stream or well to determine whether, say, naturally occurring arsenic spiked in their water supply or cows had a recent bathroom break upstream. 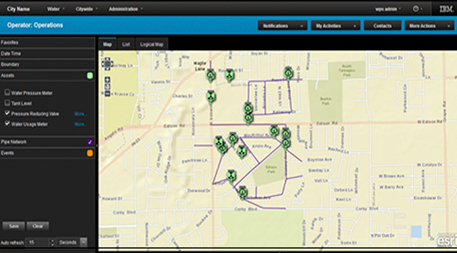 Miami–Dade County’s parks system, which uses more than 300 million gallons of water annually, is using IBM’s platform to detect irregularities in water consumption and dispatch park managers to check them out. "We’re saving literally months in finding and reacting to those repairs that are needed," said Jack Kardys, director of Miami–Dade County, Parks, Recreation, and Open Space Department. The department anticipates 7 to 12 percent savings on its annual $4 million water bill.

CH2M also provides water utilities with a systems management platform that helps operators be proactive in solving problems, rather than reactive, said Thompson. In 2013, with U.S. Environmental Protection Agency funding, CH2M installed surveillance and response systems in Philadelphia, New York, Dallas and San Francisco. Although the systems were conceived to protect drinking water from foul play, the cities are using them for quotidian water quality management, said Thompson. CH2M has completed about a dozen large water systems in the U.S. and thousands of systems of various sizes worldwide, he said.

The true strength of data platforms is bringing together in one location various streams of information — water flow rates, infrastructure condition, water quality — that previously were siloed.

Michael Sullivan, sales manager for IBM Smarter Water Management, said such systems could have identified Flint’s lead hazard much more quickly. "Part of the problem with Flint was there was no real visibility," he said. "There were pockets of information, but the problem didn’t really come into view until much farther along the line."

Data platforms such as IBM’s and CH2M’s can incorporate other salient information as well, such as the material and age of pipes in a certain area and their projected life expectancy in local environments. They also can flag problems in near real time when a customer calls about leaks or altered water quality in a specific area surpass a baseline threshold.

Relying on customers’ eyes on the ground is not new. The 1993 Cryptosporidium parvum outbreak in Milwaukee that sickened 400,000 people initially was flagged when a local pharmacy called public health officials, saying it couldn’t keep Imodium in stock, Thompson said.

Human feedback is especially important for systems that do not yet have smart meters or sensors. "Treating citizens like a sensor," as Sullivan puts it, is particularly popular in developing countries. In South Africa, people tested an IBM-sponsored app called WaterWatchers that allowed them to report issues such as leaks, contamination or stream obstructions via their mobile phones, said Sullivan.

While smart technology can help water utilities make more savvy decisions about where to spend capital investment dollars, potentially saving money overall, there’s still the question of where to get the $1 trillion the AWWA predicts we’ll need to fix ailing U.S. drinking water infrastructure over the next quarter-century.

Such dollars come primarily from local water fees, tax-exempt municipal bonds and the EPA’s Clean Water State Revolving Fund, which allocated $863 million in grants (PDF) to states for drinking water facilities in fiscal year 2016. Congress created a new low-interest loan program in 2014 but has not yet appropriated money for it.

These pools of money are not enough. To reach $1 trillion in investment, the U.S. will need to spend an average of $400 billion annually. The $36 billion for capital investments falls far short.

Private investment via public-private partnerships is a likely path for struggling municipalities, according to the multinational professional services firm EY (PDF), despite two significant hurdles. Businesses typically have shied away from water infrastructure investments because the water sector is heavily regulated and conservative about change because people’s health is at stake. And human rights activists long have been concerned that getting corporations involved in water delivery will lead to prices too high for poor people, an untenable situation when water is critical for life.

Ultimately, customers likely will have to pay more for water so utilities in turn have the funds they need to replace aging infrastructure. According to the AWWA, most Americans pay less than $3.75 for every 1,000 gallons of water delivered to their taps. Tommy Holmes, legislative director of AWWA, said that vastly undervalues safe drinking water. "People have this idea that because water is a naturally occurring thing that falls from the sky, it shouldn’t be expensive," he said. "But Mother Nature doesn’t collect the water, treat it and deliver it through pipes. People do that, and they need to be paid."