Today, CH2M Hill and The Nature Conservancy are announcing a five-year collaboration “to bring innovative and integrated engineering and environmental solutions into the global marketplace.”

Or, to put it in plain(er) English: to grow “green infrastructure.”

Green infrastructure is a term finding increasing resonance in an era of urban and climate challenges. It is distinguished from “gray infrastructure” — the concrete-intensive edifices, often laden with pipes, pumps and other devices, that are the foundation of our cities, coastlines, roadways and waterways.

Green infrastructure, by contrast, harnesses natural systems to address the same challenges, such as stormwater management, heat islands, biodiversity, food production, air quality, clean water and healthy soils. For example, building marshes and oyster beds to protect a coastline by absorbing some of a storm surge's energy. Or planted roofs, which reduce toxic runoff, cool cities and clean the air.

This is not new stuff — pilots, prototypes and full-blown systems have existed for decades — but green infrastructure is coming into its own, viewed by cities, planning agencies and developers as economical and environmentally beneficial. But they are still largely underutilized tools.

Which is what CH2M Hill, a global engineering firm, and TNC, a nonprofit advocacy group, hope to change. The partnership “brings together complementary capabilities,” explained Jeffrey North, Senior Advisor of Corporate Practices for The Nature Conservancy, citing “TNC's science and policy strengths with CH2M Hill’s design, engineering and building capacities. We’ve got scientists who can give you mathematical precision on the ability of an oyster reef to stop storm energy, but we don’t build a lot of those all by ourselves. We need partners to do that.”

The plan focuses on four regions in North America: the West Coast, the post-Sandy region of the Eastern Seaboard, the Gulf of Mexico and the Upper Mississippi and Great Lakes.

The two organizations already have worked together in two of these areas. For example, in Howard Beach, in Queens, N.Y., TNC retained CH2M Hill to study how natural infrastructure addresses climate change impacts on coastal communities, including those in urban areas. The final report described the impact on climate risks and community resilience, measured the financial benefits of the infrastructure’s ecosystem services and laid forth a range of financing options.

The two are also partnering in the Gulf Coast on a project involving oyster reefs to mitigate storm surges. The ultimate client for that work is, perhaps appropriately, Shell.

The Howard Beach and Gulf Coast projects became touchstones for what’s possible at a larger scale, and the two organizations set out to create a more strategic relationship. TNC and CH2M Hill recently held a summit in Washington, D.C., to look at project opportunities across North America.

“We have said this will be a global endeavor, but will focus on North America right now both for efficacy and start-up common sense,” North told me last week. 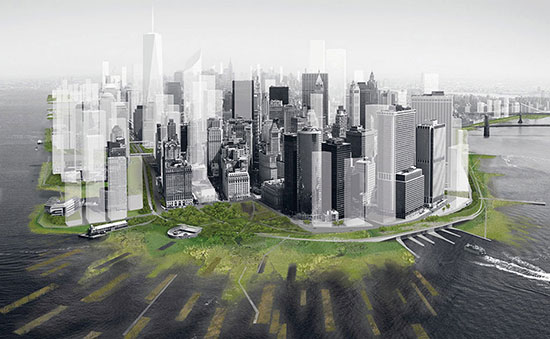 Green infrastructure has an attracting allure — use nature to replace steel and concrete! — but the field is still in its infancy. “We're early in the curve,” said Matthew Wilson, Senior Principal Consultant at CH2M Hill, who’s heading up the partnership for his company. “The market is still testing out the viability of these approaches, both from a practical standpoint of do they work. And also, importantly, are they cost-effective over the near-term, the mid-term and the long-term? Those are the kind of key questions that our teams are going to address together.”

A litany of outcomes

It’s not just coastal wetlands and flood plains. Green infrastructure has potential just about anywhere. For example, says North, the revitalization of both the Los Angeles River and the Chicago River are simultaneously addressing water quality, stormwater control, habitat value and the community value those bodies of water can offer.

Another example, close to home for North, is in Cambridge, Mass. “There is a constructed wetland a mile from my house. It was built to address combined sewer overflow problems and get closer to compliance. It save the city of Cambridge a lot of money over the gray infrastructure alternative.” (North pointed out that this was not a TNC or CH2M Hill project.)

The Cambridge project generated a multitude of benefits, he says. “It’s a gorgeous area where you would take your family for a picnic. The habitat value is evident to anybody who walks by and observes the flora and fauna, the biodiversity in this five-acre parcel. There are carbon sequestration benefits that we could calculate, and local air quality and climate regulation value for the residents and businesses adjacent to this place.”

The alternative would have been a water treatment facility — concrete, pumps, pipes, chemicals and a crew 24/7 to monitor the operations. Says North: “We know that the business case for that facility versus the green alternative, which doesn’t require a crew 24/7, is very, very compelling.”

From reefs to roofs

The benefits of such projects aren’t limited to large, public-sector projects. There are green infrastructure opportunities in the private-sector, too. One example is a Dow project in Seadrift, Texas, that cost about $1.2 million to do the job that would have cost $40 million if the company had built a traditional engineered wastewater treatment plant. The wetland also provides habitat for deer, bobcat and birds, even alligators.

“For private-sector entities, all of a sudden you find value that hasn’t been codified in the permitting books, and it is not on the options list for an engineering firm or a vendor that comes to you with solutions,” says North. 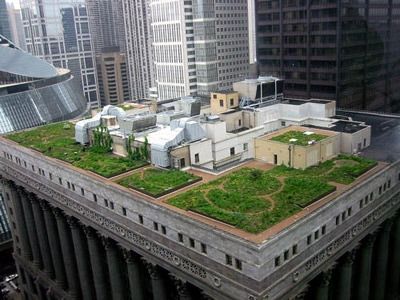 For example, he says, consider a green roof. “If you are a facilities manager, the option of a green roof for a new building or a retrofit might not even occur to you because you’re not aware that the roof lasts longer, provides value to your employees who look out on it, has heating and cooling benefits for the building and has all kinds of stormwater benefits for the company and the municipality. There may be education benefits, which are pretty small compared to saving money on heating and cooling. But not a lot of organizations have that on their list of options or alternatives.”

North is quick to acknowledge that green infrastructure isn’t always the ideal solution. “A green roof isn’t going to work in every situation, and an oyster reef won’t work on every coastline for storm defense work.”

Still, there’s great promise here with potentially attractive bottom-line benefits. Assessing those are a large part of what TNC and CH2M Hill hope to assess. “One of the goals of this partnership is to take this to scale,” explained CH2M Hill’s Matthew Wilson. “One of the key theses of natural infrastructure is that when you move to scale, that's where the strengths of bringing these natural systems comes in. So for example, instead of just doing a small strip of a coastline, take an entire bay and look at hundreds of acres of wetlands, coastal reefs and other things. The scale issue is really promising as we look forward.”

I asked North and Wilson to envision how their partnership might advance the field over the next two to three years.

Having projects in the works in all four regions would be a start, replied Wilson. Beyond that, “We're absolutely going to be monitoring success, and what works and what doesn't work. And sharing that with the market through professional societies, white paper presentations and general thought leadership.”

Another sign of success, said Wilson, would be “a flow of capital and projects at scale” — for example, “the entire Puget Sound or an entire region, which is going to require capital, resources and managing that so that we're testing this out at scale.”

He added, “I think what we're forming here is a lasting relationship where we can learn from each other's organizations and really have cross pollination of ideas and techniques. They can learn from us about project management and we can learn from them about science. So, our people meeting one another, working together and doing cool projects together to shift the dial in both of our organizations.”

“We want to say nothing less than we changed the menu,” responded TNC’s North when I asked him to look a few years out. “Green infrastructure is now on the menu, we’re developing the list of entrees and we’re proving out what goes best with those menu choices.”

Second, he said, “We will have put this on the action-item list for facilities managers as well as engineering firms, and we’ll have this proliferated into policy circles. It’s going to be a hot topic with engineering associations. And getting it into the curricula of engineering schools, so when engineers come out they’re at least familiar with green infrastructure and it’s in their consideration set.”

North quickly admitted that all this is ambitious, but that’s the point. “We’re doing nothing less than changing the way society addresses infrastructure challenges. This is a big, big deal. As you know, municipalities and private-sector entities all over the world are looking at a big replacement bill. Lots and lots of infrastructure is wearing out and needs to be replaced. I don’t think we’re going to use logs and vines to replace the Golden Gate Bridge, but there are lots of places where we can use natural solutions to complement engineered ones for longer-life infrastructure that brings other benefits, and very likely have a lower up-front bill."

He added: “If we can do all that, we’ll be cooking with gas."