The challenges of diversity in sustainability leadership

The challenges of diversity in sustainability leadership

The goal of environmental stewardship is to preserve the diversity of ecosystems, cultures and natural resources. Organizations pledging to protect the planet’s resources should naturally reflect the diversity needed to solve the world’s big, interconnected problems.

New research shows that green-focused foundations and nonprofits must reframe the way they build diversity in leadership positions — which begins with executive search.

“We need diversity to happen at all levels of environmental efforts, starting with the hiring process," said Whitney Tome, executive director of Green 2.0, an organization advancing racial diversity across mainstream environmental foundations and government agencies.

In the environmental sector, particularly, people of color comprise only 12 to 16 percent of staff at environmental organizations and agencies.

Data transparency, accountability and increased resources are among the tactics discussed to create an environmental movement with less discrimination and more social equity, and one that can win environmental battles and fair outcomes for society’s most climate-vulnerable people, often people of color. Green 2.0 calls for roots that run deeper than organizations “checking a box” to receive marks on progress.

The "unicorn" in the room 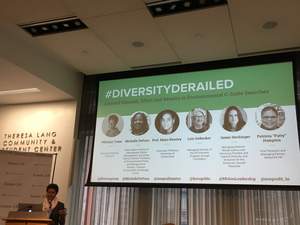 “Diversity at the leadership level in NGOs is woefully lacking, and as you move higher, diversity gets smaller,” said Michelle DePass, Tishman professor of Environmental Policy and Management at The New School. “The executive search is an overlooked way to diversify the environmental movement.”

Tome quoted a search firm that participated in Green 2.0’s research: “They [organizations] always think they’re going to get the superstar who’s also diverse, who’s also going to result in them achieving their biggest ambition ever. Diversity is for sure wrapped up in that unicorn.”

But simply advocating for diversity, said Professor Maya Beasley, author of the report, does not suddenly translate to results. It is an ongoing effort between search firms and the hiring managers they serve.

Organizations turn to executive search firms to assist in hiring for senior-level positions with the interest of finding diverse candidates. Search firms have become the “gatekeepers of the network that impacts the movement of talent.” She writes:

Search firms serve two roles in diversifying senior leadership. The first is to partner with organizations to identify what they are looking for in a new hire. The second is to help organizations move beyond their own networks to find the best candidates. Despite the relatively high proportion of well-educated people of color in the United States, diversity among management and leadership in a variety of sectors remains limited. In the environmental sector, particularly, people of color comprise only 12 to 16 percent of staff at environmental organizations and agencies.

The challenge to finding the candidates who will create beneficial change at a large scale is making sure they’re not ignored or passed over because of conscious or unconscious bias. Both the hiring managers of NGOs and nonprofits, as well as hiring executives, must be held accountable, Beasley maintains.

The Diversity Derailed report assesses executive search firms’ impact on increasing diversity and the practices used by these firms and their clients. It is culled from 85 interviews and surveys with CEOs, COOs and HR directors of major U.S. environmental nongovernmental organizations and the search firms they used.

The data is alarming: Nearly 90 percent of search firms said that bias is a problem in executive searches. Nearly half of NGOs say there’s an unconscious bias within their organizations and 16 percent say there’s active resistance to diversity in searches.

About 70 percent of search firms mandate a diverse slate of candidates — but only if the client prioritizes it. This is a problem, as only about 28 to 44 percent of NGOs short-list diversity as a priority.

Why does this happen? A quarter of foundations and search firms say there are not enough qualified applicants among people of color. And more than 35 percent of search firms quote a “bad cultural fit for applicants of color”.

Beasley remarked that this reasoning is overemphasized (or as one person in the audience called it, "bullshit"). For example, the surveyed NGOs, foundations and search firms were given a hypothetical short list of job candidates: two black men including one Ivy League grad, and one white man. Only one-fourth, one-fifth and one-third believed the Ivy League graduate would be a better fit for the organization, respectively.

“Training the bias out of people doesn’t work, but we can try minimizing its impact,” said Beasley.

“I don’t want to just show a report and say, ‘here’s a problem,’” said Tome. “I want to say, here’s the solution.” She offered several ways to help boost the diversity of job candidates: 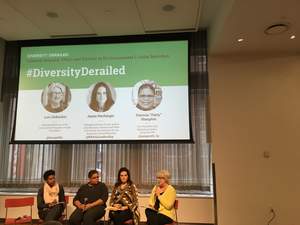 “Delivering excellence is what nonprofit HR is all about,” said Patricia Hampton, vice president and managing partner of Nonprofit HR, citing that nonprofits are the third-biggest hiring force in the world. “We are paid to push back. Are you prepared for the diversity walking in your front door?"

She continued, “Before we decide that we want to partner with you, we’ve checked you out on GuideStar. Going in, we know if you were ‘checking a box’. We look past the organization’s name to their story, and what they have brought to the industry.”

To her, this means asking deep questions: Who is funding the foundation? What are its goals? And why is diversity good for the community it serves?

Jamie Hechinger, managing director at Russell Reynolds Associates, said it's important for CEOs to support the company's push for diversity, and that it set “aggressive and transparent hiring goals”. Focusing on metrics isn’t important, however, without understanding the experience of employees, such as how their hiring decision was made, the flexibility around career paths, employee retention and an empathetic, open culture.

“Philanthropy is notoriously not diverse,” said Lois DeBacker, managing director of the Kresge Foundation’s environment program. “But having internal conversations creates expectations for diversity. We ask all grant seekers to provide information about the diversity of their board and staff.”

DeBacker also stressed that it’s important that employees join the diversity conversation, rather than waiting for a top-down push from management.

The Green 2.0 report offers a checklist for organizations and search firms to make sure every environmental organization and search firm lives these important questions, and moves towards reflecting the varied world that we hope to preserve for future generations.

Whitney Tome: How to diversify the sustainability C-Suite