A changing China for a changing climate

Within the last year, the world has made pivotal commitments toward greenhouse gas mitigation and climate change adaptation. The international community has agreed on both Sustainable Development Goals to be achieved by 2030 and emissions reduction goals under the Paris Agreement on climate change concluded in December.

But this momentum could be threatened if China, the world’s largest emitter of greenhouse gases, does not step to the forefront of climate action. 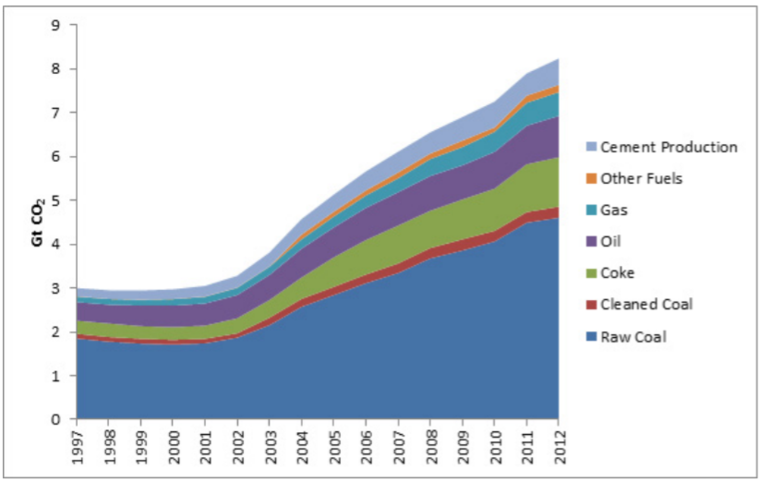 Some experts (PDF) believe that China has entered a "new normal" of development, focusing less on the quantity of economic growth and more on its quality.

After its commitments at the Copenhagen climate conference in 2009, China achieved important developments, with a special focus on emissions mitigation in the energy sector, including by increasing wind, solar, nuclear and hydropower production. China is now the largest producer of renewable energy, generating 325 million tons of oil equivalent in 2013. Although renewables represented only 11 percent of the country’s total energy production in 2014, this shift indicates the Chinese government’s effort to transition its energy production mix.

Rapid growth in China’s overall emissions continues, however, and past policies have failed to adopt bolder solutions. A look at the country’s Intended Nationally Determined Contribution (INDC) for reducing future emissions under the Paris Agreement may hint at what the world can expect from the "new normal" of its largest emitter.

The Chinese government seeks to build a low-carbon energy system by reducing coal consumption, enhancing the clean use of coal, scaling up renewable energy and investing in hydropower while ensuring the resettlement of inhabitants who may be displaced by hydropower development. China plans to amplify its carbon sinks through reforestation and to enhance overall climate resilience through conservation and water management.

China also will foster energy efficiency and low carbon intensity (carbon emissions per unit of GDP) in both the industrial and transportation sectors, adopting emission standards and promoting low-carbon urbanization, services and businesses.

The country will invest in innovation toward a low-carbon development pattern and strengthen science and technology support. China intends to enhance regional strategies by identifying provincial differences in carbon intensity, limiting large-scale industrialization and urbanization, and favoring medium and low population concentrations.

China also has committed to establishing a Fund for South-South Cooperation on Climate Change to help other developing countries that are seeking to reduce their emissions and to address the impacts of climate change.

China faces many challenges in its commitment to reducing greenhouse gas emissions. In its INDC, the government states, "China is currently in the process of rapid industrialization and urbanization, confronted with multiple challenges including economic development, poverty eradication, improvement of living standards, environmental protection and combating climate change."

With the largest population on Earth, the highest emissions and the largest GDP, the country embodies extremes. And it must lead the national shift with the leadership of institutions that originated during the 1949 Communist Revolution.

China encompasses the traditional opposition between economic growth and sustainable development. It lies between the "developed" and "developing" country paradigm and is experiencing a unique challenge: China is a major global leader, but it also struggles with poverty and low standards of living.

With the recent economic downturn, the demand for employment and faster economic growth has increased. In a world where GDP is a measure of power, countries are reluctant to address welfare and environmental standards at the risk of slowing economic growth. If social needs go unmet, the country’s environmental plans may be jeopardized.

Additionally, China’s global emissions are linked with carbon-intensive goods and services that are often exported. Is China ultimately responsible for its emissions, given that these goods are largely destined for other countries (PDF)? To diplomatically acknowledge all of these elements in the international arena is a complex task.

What does China need to do?

To achieve these goals, the Chinese government will need to implement existing national policies, particularly the National Program on Climate Change (2014–2020), as well as improve the evaluation and accountability of carbon targets.

The financing of all of these measures will stem from budgetary increases, public-private partnerships, taxation policies, government procurement systems, green credit lines and the market in carbon emissions trading. The Chinese government will seek the broad participation of stakeholders and international cooperation on climate change.

These commitments will have major impacts not only on greenhouse gas emissions, but also on future economic trends. If China successfully implements all of these policy measures, the new development model can lead to major global changes.

Wherever China goes with its environmental policy, the world will be strongly influenced.

If the INDC is implemented, China’s domestic market will drive the world’s economy to sustainable practices. If China continues to invest in renewable energy sources, these technologies will be available for quick scaling worldwide. Decreases in its carbon intensity will lead to a globally noticeable decrease in fossil fuel demand. Success in creating forest carbon sinks may create a stronger global market-based mechanism for reducing carbon emissions throughout the world.

China is one of the few developing countries with a real capability to transition autonomously to a low-carbon future. The Chinese internal market can be a driver for greener production while maintaining its modest levels of individual-level carbon dioxide emissions. The country’s greatest assets are its extremely large scale and political influence, which give China the ability to fully reverberate its domestic actions in the international system.