Throughout the Future of Energy Global Summit in New York City on April 9-10, people asked: How quickly will electric vehicles arrive? And how rapidly will the market grow?

One of the most popular sessions at the summit focused on the future of electric vehicles. The panelists who covered electric vehicles came from a wide range of companies, countries and perspectives. On one key idea, there was no debate: Electric vehicle sales are about on the upswing.

Electric vehicle sales are about on the upswing.

Moore said China’s market made up about 50 percent of global electric vehicle sales in 2017.

Throughout the conference, various panels touched on the key "choke points" holding back a rapid deployment of electric vehicles: range anxiety and charging infrastructure, both of which concern potential customers.

Infrastructure was a key area of interest during one of the plenary sessions, which hosted representatives from BMW, California Air Resources Board (CARB) and Edison International.

Pedro Pizaro, president and CEO of Edison International, said his company needed to do more to advance electric transportation, although it has pilot programs that are deploying infrastructure. He said some sources say the number of electric vehicles in California could range between 4 million and 7 million by 2030.

Mary Nichols, chair of CARB, said the regulatory organization was doing extensive work on the infrastructure end and supportive of electric vehicles in general.

Ing Joachim Kolling, head of energy services at BMW, said he believes the "time of the pilot is over." He said BMW is successful in how it is approaching electric vehicle development. However, he said that as the space evolves, he wants to ensure that electric vehicles are connected to renewable energy sources and charge at reasonable prices.

As the space evolves, he wants to ensure that electric vehicles are connected to renewable energy sources and charge at reasonable prices.

Vehicle infrastructure was also on the mind of a breakfast panel with representatives from Leclanché North America, eCAMION and the EV Network. The panel was moderated by Salim Morsy, advanced transport analyst at BNEF. The group discussed how companies are approaching the scale-up of charging stations and the availability of batteries across North America and around the world.

Reza Shaybani, co-founder and CEO of EV Network, said electric vehicle infrastructure is growing in the United Kingdom. The firm secured 200 sites for new charging stations — with around 80 sites already signed on with major utilities.

"Grid services are becoming a very important part of this," Shaybani said. The United Kingdom government is placing $271 million into the development of electric vehicle infrastructure.

Rapid charging is crucial, Sudan said. As an example, he mentioned a pilot project that eCAMION used as a case study in Canada. The project, a joint venture between Sudan’s company, Leclanché, and SGEM Group, built charging stations along a 3,400-kilometer highway in Canada. At each of these stations, three vehicles could charge up fully in 30 minutes.

"Our infrastructure has to mirror what the consumer wants," Sudan said.

Bryan Urban, executive vice president of Leclanché North America, said the company is focusing on integrating energy storage into vehicle infrastructure. “The structural requirements [for EVs] continues to be taxing.”

In a different example, an electric vehicle project in India called Sun Mobility involves separating batteries from buses to make the charging process more seamless, Urban said. Under this model, buses swap their batteries out in about three minutes, departing with fully charged batteries.

Morsy asked a key question: When these firms are building our infrastructure solutions, how fast do they need to work?

When these firms are building our infrastructure solutions, how fast do they need to work?

Shaybani said this underscores the importance of investing in rapid charging. He said that in the U.K., a trip from London to Manchester should take two to three hours without traffic. Drivers do not want to stop for long periods of time to charge.

In response, Sudan said different levels of charging could coexist. Charging at home and at the office could be a bit slower given that the EV will be in the same place for an extended period of time.

However, he said, as a consumer, "I want to have the ability to charge faster." Urban agreed that speed is important and that a consumer that has an EV capable of fast-charging will want to see infrastructure that supports it.

"It is not fast-charge versus slow-charge," Sudan said. "It’s how you buffer the infrastructure [changes] that will be the real application."

Morsy also asked if there is a business case for corporate-owned electric vehicle infrastructure, given high upfront capital costs.

"Not today," Shaybani said. "That’s why the [United Kingdom] government is taking steps to bridge that gap. You don’t invest [in] infrastructure today to make money tomorrow."

Sudan said there are opportunities in Canada around high-rise condos with nearby charging as profitable in the short term. Urban said mass transit spots are another location where the business case makes sense.

Charging technologies seem as if they will continue to undergo innovation and evolution over the next few years. Two of the 10 winners of BNEF’s New Energy Pioneers award for 2018 are developing ideas around electric vehicle charging. Greenlots, an electric vehicle-charging company, is working in the United States with partners who will use their software to manage electric vehicles and balance the grid. WiTricity, another winner, is working to move electric power over a distance with no wires to charge electric vehicles.

Colin McKerracher, head of advanced transport at BNEF, kicked off an hour of the conference’s second day that focused solely on the state of electric vehicles. He asked the audience to take a step back: "When we are in the middle of something changing quickly, it can be easy to lose perspective."

While the growth of electric vehicles is impressive, McKerracher said the first few percent is relatively easy. Meanwhile, the necessary growth to hit greenhouse gas reduction targets is much higher. Electric vehicle sales in Europe would need to be between 13 percent and 18 percent in 2025 — up from their current value of close to 3 percent — to meet these goals.

Also, he identified a few factors that can hold back market transition — including a slowdown in battery price declines, trend toward oil prices falling, shortage of electric vehicle infrastructure, issues with policy changes and complications due to technology failure.

Finally, McKerracher said it is important to keep an eye on other aspects of the transportation sector for growth of electric integration — such as municipal buses, commercial vehicles and marine craft.

In the following plenary session, the panelists also dove into the impact of policy and politics on electric vehicle growth.

Pizaro said utilities need to play a role in ensuring the grid is ready to accelerate the growth of charging infrastructure.

Utilities need to play a role in ensuring the grid is ready to accelerate the growth of charging infrastructure.

McKerracher, the panel’s moderator, asked Nichols for her response to the United States Environmental Protection Agency’s decision to roll back the 2022-2025 Obama-era CAFE standards. He also asked her opinion about their impact on electric vehicle growth.

Nichols said some aspects of the regulations, such as making automakers responsible for what type of upstream energy the electric vehicles uses to charge, are problematic. However, she said small tweaks — not an overhaul of the standards — were appropriate.

Kolling said the market for electric vehicles is growing quickly, but that some expect it to overtake conventional vehicles too quickly. Agreeing with his comment, Nichols said that there has been some "overhyping of how easy it will be to get the charging to follow the adoption of vehicles."

How the future of electric vehicle infrastructure will evolve is an open question. But many presenters at the Future of Energy Global Summit seem to believe they have part of the answer. 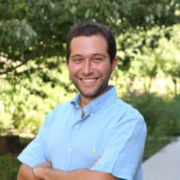 From Colorado to New Mexico to Kansas, new governors seek the next clean energy frontier

See all by Corey Cantor