As the effects of climate change become more widespread and alarming, U.N. Secretary-General António Guterres has called on nations to step up their plans for cutting greenhouse gas emissions. Every country has a part to play, but if the world’s largest emitters fail to meet their commitments, the goal of holding global warming to a manageable level will remain out of reach.

U.S. carbon dioxide emissions are on the rise after several years of decline, due in part to the Trump administration’s repeal or delay of Obama administration policies. In contrast, China — the world largest emitter — appears to be honoring its climate targets under the 2015 Paris Agreement, as we documented in a recent article with colleagues.

We study many aspects of China’s energy and climate policy, including industrial energy efficiency and reforestration. Our analysis indicates that if China fully executes existing policies and finishes reforming its electric power sector into a market-based system, its carbon dioxide emissions are likely to peak well before its 2030 target.

Over the last decade China has positioned itself as a global leader on climate action through aggressive investments and a bold mix of climate, renewable energy, energy efficiency and economic policies. As one of us (Kelly Sims Gallagher) documents in the recent book "Titans of the Climate," China has implemented more than 100 policies related to lowering its energy use and greenhouse gas emissions.

Notable examples include a feed-in-tariff policy for renewable energy generators, which offers them a guaranteed price for their power; energy efficiency standards for power plants, motor vehicles, buildings and equipment; targets for energy production from non-fossil sources; and mandated caps on coal consumption.

China has added vast wind and solar installations to its grid and developed large domestic industries to manufacture solar panels, batteries and electric vehicles. In late 2017 it launched a national emissions trading system, which creates a market for buying and selling carbon dioxide emissions allowances. This was a profoundly symbolic step, given that the United States still has not adopted a national market-based climate policy.

Most of these policies will produce additional benefits, such as improving China’s energy security, promoting economic reform and reducing ground-level air pollution. The only major program explicitly aimed at reducing carbon dioxide is the emissions trading system. 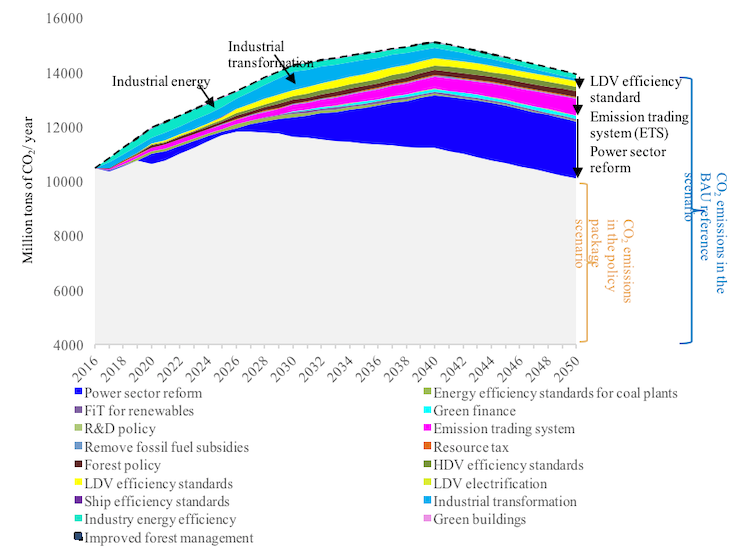 China will need to carry out multiple policies to start reducing its carbon dioxide emissions by 2030 — most importantly, reforming its electric power sector. Gallagher et al., 2019., CC BY

Under the Paris Agreement, China committed to start reducing its carbon dioxide emissions and derive 20 percent of its energy from non-fossil fuels by around 2030. But when Chinese emissions rose in 2018, international observers feared that Beijing might fail to meet its targets. We analyzed China’s actions to assess that risk.

In our review, we found that the policies with the greatest influence over China’s projected emissions in 2030 were power sector reform, industrial transformation, industrial efficiency, emissions trading and light-duty vehicle efficiency.

Reforming the electric power sector is an essential step. Traditionally, electricity pricing schemes in China were determined by the National Development and Reform Commission, which leads the country’s macroeconomic planning. They favored existing power producers, particularly coal plants, not the cleanest or most efficient sources.

Even as China made big investments in wind and solar power in recent years, it also kept building coal plants.

China committed to electric power reform, including emission reductions and greater use of renewables, in 2015. Converting to a process under which grid managers buy electricity from generators starting with the lowest-cost sources should facilitate installation and use of renewables, since renewable electricity has almost zero marginal costs. Meanwhile, renewable energy projects across China, especially solar, have become cheaper than grid electricity.

But success is not guaranteed. The affected companies are giant state-owned enterprises. There is political resistance from owners of existing coal-fired power plants and from provinces that produce and use a lot of coal. The current United States-China trade war is slowing China’s economic growth and spurring rising concerns about employment, which could further complicate the reform process.

China’s emissions trading system has had a very modest impact so far because it set a low initial price on carbon dioxide emissions: $7 per ton, increasing by 3 percent annually through 2030. But our analysis found that emissions trading, which allows low-carbon generators to make money by selling emissions allowances that they don’t need, could become influential over the longer term if it can sustain a much higher price. If China reduces its cap on total carbon dioxide emissions after 2025, which will increase the price of emissions allowances, this policy could become a major driver for emission reductions in the power sector.

Energy efficiency standards, particularly for coal-fired power plants, factories and motor vehicles, also will be very important over the coming decade. To continue driving progress, China will need to update these standards continuously.

Finally, there are some important gaps in China’s climate policies. Currently they only target carbon dioxide emissions, although China also generates significant quantities of other greenhouse gases, including methane and black carbon.

And China is contributing to emissions outside of its borders by exporting coal equipment and directly financing overseas coal plants through its Belt and Road Initiative. No nation, including China, currently reports emissions generated abroad in its national emissions inventory. 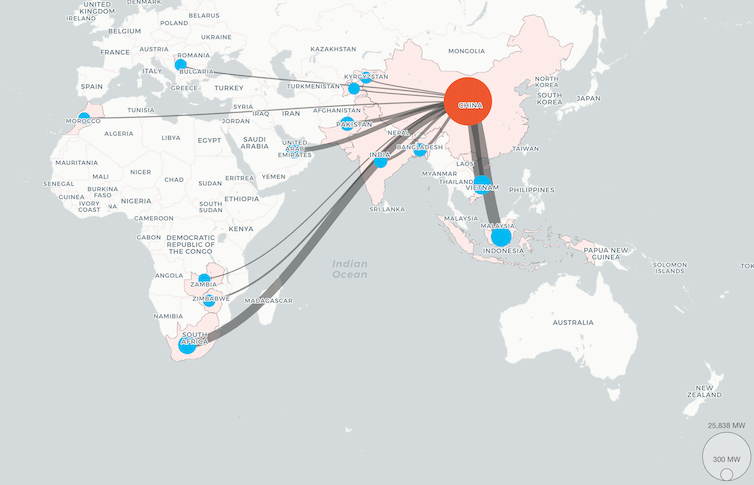 The biggest challenge China faces in achieving its Paris targets is making sure that business and local governments comply with policies and regulations that the government already has put in place. In the past, China sometimes has struggled with environmental enforcement at the local level when provincial and city governments prioritized economic development over the environment.

Assuming that China does carry out its existing and announced climate and energy policies, we think its carbon dioxide emissions likely could peak well before 2030. In our view, Chinese leaders should focus on completing power sector reform as soon as possible, implementing and strengthening emissions trading, making energy efficiency standards more stringent in the future and developing new carbon pricing policies for sectors such as iron, steel and transportation.

If they succeed, U.S. politicians no longer will have "But what about China?" as an excuse for opposing climate policies at home.

Robbie Orvis and Jeffrey Rissman from Energy Innovation and Qiang Lu from the National Center for Climate Change Strategy and International Cooperation in China co-authored the study described in this article. 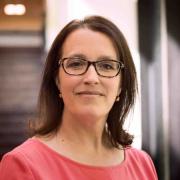 See all by Kelly Sims Gallagher