China's climate progress may have faltered in 2018, but it seems to be on the right path

Despite clear signs that the need to act on climate change is becoming more urgent, global greenhouse gas emissions are set to rise for the second straight year.

China, the world’s second-largest economy and ground zero in the global effort to combat climate change, is among the biggest drivers of this increase. Accounting for 27 percent of global carbon dioxide emissions, China has been the world’s leading emitter for more than a decade. Although its emissions stayed flat between 2013 and 2016, they rose again in 2017 and increased by an estimated 5 percent in 2018.

While recent increases are certainly cause for concern, based on my research on China’s climate change policies, I see grounds for optimism in terms of what to expect with China’s carbon footprint.

China’s challenge in addressing climate change is the same as it ever was. It relies heavily on coal to power its rapidly growing economy.

The factory of the world, more than two-thirds of China’s emissions come from electricity generation and industry, which includes both manufacturing and construction. These sectors rely heavily on coal, which accounted for about 70 percent of China’s emissions in 2016.

At one point, more coal was consumed within 400 miles of Beijing than in the entire United States.

Today, China uses more coal than the rest of the world combined. At one point, more coal was consumed within 400 miles of Beijing than in the entire United States. Unsurprisingly, the 2018 increase largely comes from industry and power plants.

Aside from reliance on coal, China’s carbon emissions are driven by the speed of its economic growth. Studies often demonstrate that this growth is the single biggest factor influencing China’s energy use.

And while both China’s vulnerability to climate change and its pollution problems provide ample incentives to lower emissions, Beijing has no intention of slowing down its economy simply to protect the environment. With a per capita GDP less than one-third of U.S. levels and millions still living in dire poverty, China has a compelling need to continue to expand its economy. 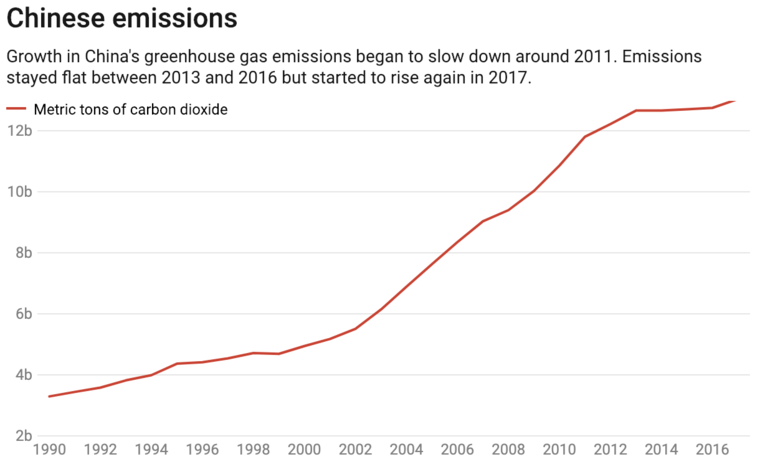 One report estimates that local governments took advantage of a decentralized permit system to develop 259 gigawatts of new coal capacity — roughly equivalent to all the power currently generated by U.S. coal plants. Mired in a trade war with the U.S. and concerned about a slowing economy, China could engage in more fiscal stimulus in 2019. That would boost energy consumption — and emissions.

If China’s economy is to continue to grow rapidly for the foreseeable future, is there any hope in the war against climate change?

I believe that the answer is "yes, but it depends." Chiefly, China’s success in lowering emissions rests on how fast it can change its energy and economic structures.

The country is already aiming to reduce the share of coal and other fossil fuels it consumes. Its latest five-year plan envisions cutting the share of coal in total energy consumption to 58 percent by 2020 from 64 percent in 2015. As recently as 2010, it was 80 percent. In the same period, China seeks to increase the share of electricity it gets from nuclear, solar and other renewable energy sources, including wind, to 20 percent.

The production of cement alone accounts for over 10 percent of China’s carbon emissions, nine times more than India.

At the same time, China is reforming its economy. Rather than investment and manufacturing, it will emphasize consumption and services.

Today, China is the world’s largest manufacturer of energy-intensive goods accounting for roughly 35 percent of the global total. The production of cement alone accounts for over 10 percent of China’s carbon emissions, nine times more than India.

Services use less energy than manufacturing — think of an insurance company versus a steel mill. So the more China can change what makes its economy hum, the less energy it will consume.

According to the Energy Information Administration, a U.S. federal agency, if China rapidly can shift to a service-based economy, it can reduce the amount of energy it uses by five quadrillion British thermal units by 2040, an amount roughly equivalent to what Spain consumes annually.

Fortunately for everyone on Earth, most scholars say China can hit these targets.

China has, for instance, made great progress reducing the energy-intensity of its economy, defined as the amount of energy consumed per unit of GDP. China surpassed its official target, lowering its energy intensity by more than 55 percent between 1990 and 2015.

Despite its current emissions growth, the United Nations Environment Program says that China remains one of the few major economies "on track" to meet its Paris targets for reining in carbon dioxide emissions.

China’s strong track record is largely due to a combination of aggressive spending and a bold mix of climate, energy efficiency and economic policies. China has implemented more than 100 climate change policies related to lowering its energy use and emissions, estimates Tufts University’s Fletcher School scholar Kelly Sims Gallagher.

In short, despite recent fluctuations, I remain optimistic that China remains on the path toward meeting its Paris target of capping carbon emissions by 2030 and deriving 20 percent of its energy from sources other than oil, gas and coal.

Despite the recent setbacks, the most likely scenario is that China’s emissions will peak before 2030. How quickly they might decline after 2030 is not yet clear.

This is not to say China is doing everything it can to combat climate change.

Like the U.S. and all other countries, China must make its climate policies more ambitious if the world is to keep global warming well below 2 degrees Celsius, as the Paris climate accord is intended to do. For example, global emissions will be lower in the long run if China phases out its fossil fuel subsidies and stops building coal-fired power plants in other countries.

But given the pace of its economic growth, China’s accomplishments to date are notable. As the Center for American Progress, a think tank, found, if regulatory trends continue, by 2020 no American coal plants would meet China’s carbon emission standards.

That is a good reminder that the whole world, and not just China, needs to do more if we are to be spared from the worst impacts of climate change.

Beijing aims to ditch coal use by 2020