Two and a third earths. That's how many we'll need by just 2050, according to experts. Six years ago, the world's population passed 7 billion. And it's accelerating, on pace to hit 9.4 billion by 2050. As the population grows, more people will look to move up the economic ladder, especially in emerging economies. According to a paper by the Brookings Institution, about 3.2 billion people were in the global middle class at the end of last year. This number is expected to grow by about 160 million people per year on average between now and 2030.

A bigger middle class means more business, more prosperity and more economic opportunity than ever before. But it also means more consumption. In the next 20 years, it's predicted that energy use will rise 48 percent and greenhouse gas emissions will rise by 34 percent, while demand for water will be 40 percent higher than supply. Which is why, at our current rate of growth, we'll need the equivalent of 2.3 earths by 2050 to support us all.

That's not that far away — my sons will be around my age today in 2050. If I'm lucky enough to still be around, I'll have to look my grandchildren in the eye when they ask why there isn't enough water, space, energy or clean air to go around. And I'll have to say: "Sorry kids, we knew it was heading this way, but we just couldn't crack the business case for change… it just seemed too hard at the time."

Sounds flimsy, right? Well, perhaps there's another model. A viable economic model contrary to the one of "make, use, dispose" that we've been hooked on since the industrial revolution. What if big businesses such as HP could shift their business model and operations towards a more efficient, circular and low-carbon economy? What if we reinvented the way products are designed, manufactured, used and recovered?

Customers are becoming more interested in gathering experiences instead of stuff.

I recently hosted businesses leaders, policymakers and media alongside leading environmental think tank the Ellen MacArthur Foundation, at an event to debate the concept of a circular economy. There was a great deal of excitement in the room. Many businesses, including ours, recently have reasserted their commitment to the Paris Agreement on climate change. To help achieve its aims, we have an opportunity to decouple growth from a reliance on increasingly scarce raw materials, increasing efficiency and benefiting the environment.

It starts with product design: We have to build things not only to last, but to be easily repairable by the end user, even in the case of complex technology. We then need to look at the opportunity for "as a service" supply models.

I'll give you an example of this in action. We collect the used cartridges which are recycled, together with other recovered plastics, to create new ones. Not only does this save the customer money, but it also reduces waste per printed page by 57 percent.

This circular economy approach is a triple win. Companies can save money by gaining more value from raw materials, they can expand into new markets through product and service innovation and they can improve their reputation by enhancing environmental performance. Customers, meanwhile, save time, and in many cases, money — they use what they need and what's left over is repurposed for the next customer. Most important, the planet benefits as it's far less energy and resource-intensive to recover and reuse than to start from scratch every time.

The idea of ownership is being challenged — customers are becoming more interested in gathering experiences instead of "stuff."  And a service model ensures that resources are repurposed when the goods reach the end of their useful life. So, maybe more companies could start running in circles. It'll be good for business, good for customers and good for the environment. And your grandkids will thank you. 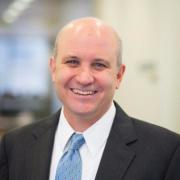 See all by George Brasher