This article is drawn from the Circular Weekly newsletter from GreenBiz, running Tuesdays.

Do you remember the "Crying Indian" TV commercial from the 1970s? The iconic ad depicts a Native American man canoeing down a polluted river, eyeing the littered shore and spewing nearby smokestacks, and shedding a single, solitary tear over the environmental degradation.

"Some people have a natural abiding respect for the beauty that was once this country, and some people don't," said the voice-over narration. "People start pollution. People can stop it."

By tugging at the heartstrings of American consumers, the commercial effectively stoked individual commitment to environmental protection. According to the Ad Council, litter was reported to have decreased by 88 percent in 38 states following the ad. At face value, it was a massive success.

The campaign was a product of Keep America Beautiful (KAB), a nonprofit founded by Coca-Cola, Phillip-Morris, Anheuser-Busch and other consumer products companies in the 1950s to educate and activate the public around environmental stewardship, particularly the perils of litter. More than 40 years later, KAB’s campaign could be seen as a harbinger of today’s brand activism. 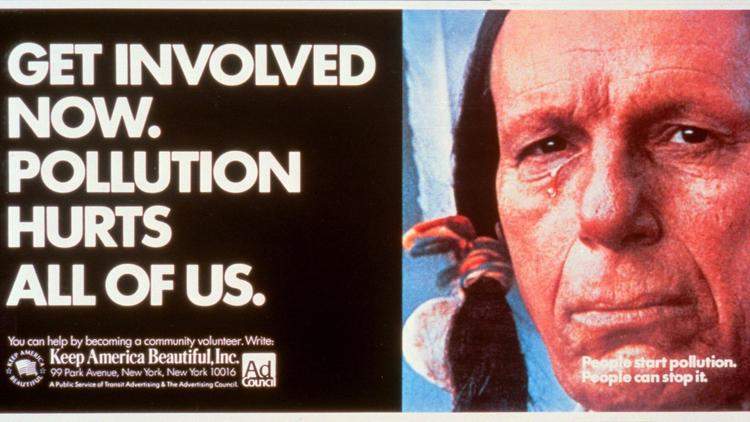 The original "Crying Indian" ad campaign from the Ad Council.

The potential for companies to drive positive environmental and social change is undeniable. (It’s kind of our bread and butter here at GreenBiz Group). But in the age of transparency, it’s critical to align one’s walk and talk. For example, a recent article in Scientific American suggests that KAB’s powerful PSA was, in fact, driven by an ulterior motive: to deflect environmental responsibility from the producers of packaging waste onto its consumers.

While KAB catalyzed community-scale litter prevention, the organization simultaneously worked to thwart legislation that would have increased extended producer responsibility, policies that require companies to take ownership of the waste that they and their products create. This included decades of lobbying, and mobilizing $14 million from 1989 to 1994 to kill recycling legislation.

While there are countless examples of companies (and government administrations) saying one thing and doing another, times have changed since the "Crying Indian." According to PwC, brand trust influences decision-making for 35 percent of consumers (and even higher levels of young consumers), and shoppers are more prepared than ever to put their money where their mouth is when it comes to environmental products and brands. They can see through greenwashing (and its nascent circular-economy cousin, "circular-washing"). For consumers, actions speak much louder than words.

Consumers know the difference between circular storytelling (talking in circles?) and doing the hard work it takes to close the loop and keep materials and resources in continuous use. As Circulate Capital, New Plastics Economy, NextWave and other new collaborations begin to create truly circular supply chains, companies will be increasingly expected to act with integrity and align their actions with their marketing claims.

Inside the global war on plastic pollution

What will it take to end plastic pollution?