Tackling climate change is expensive. But not as expensive as doing nothing, according to new research (PDF) published last week by global banking giant Citigroup.

The analysis, released late last week, is the latest in a series of high-profile research papers which outline the high economic cost of failing to tackle escalating climate risks.

In July a report from the Economist Intelligence Unit warned the "tail risks" of climate change could cause $43 trillion worth of global assets to be wiped out, while the Grantham Institute released a paper demonstrating how nations financially will benefit from tackling climate change.

Meanwhile, Lord Stern, the U.K. economist who first argued that the economic benefits of tackling climate change outweighed the costs, recently released an update to his famous 2006 report reiterating how his analysis still stands.

Under the "inaction" scenario, energy demand was addressed by considering only economic factors and the immediate availability of fuel. By contrast, under the "action" scenario, emission levels and the implications of climate change were also taken into account, alongside the cost of establishing renewables on a large scale. 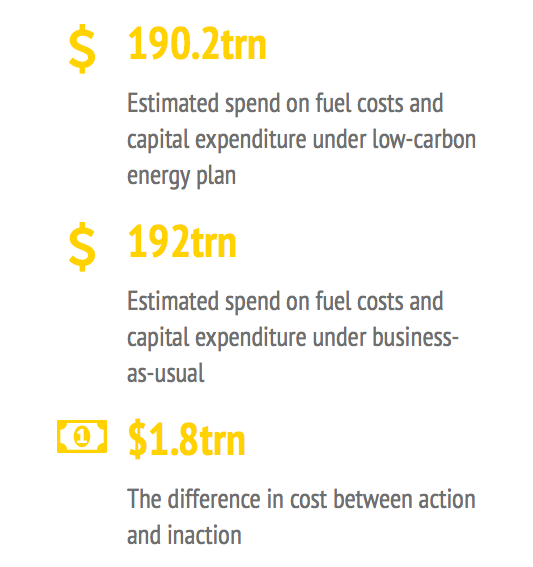 Citigroup estimated global inaction will result in a global energy spend of $192 trillion over the next 25 years. In comparison, the action scenario actually will cost slightly less, coming in at $190.2 trillion. This is due to the rapidly falling cost of renewables, alongside lower fuel usage as a result of energy-efficiency improvements, the report stated.

In addition, Citigroup estimated following the "action" scenario means more than 200 gigatons of carbon dioxide will be prevented from entering the atmosphere over the next 25 years. Two-thirds of this reduction will be a direct result of the greater investment in renewable energy, while the remaining third is sourced from energy-efficiency improvements.

The research went on to detail the investment required to transform the global power market to put it on track with Citigroup's action scenario. The power sector is the single largest carbon emitter in the energy market, pumping out 12.6GT of carbon dioxide in 2015. This was projected to double by 2040 under a business-as-usual pathway.

The analysis showed that in the early years, low-carbon energy remains costly, compared with coal and gas. However, as component costs fall and financing becomes cheaper, renewable energy becomes more competitive. It found that once renewables become cheaper per MWh than fossil fuels, there is effectively a net saving in using them. 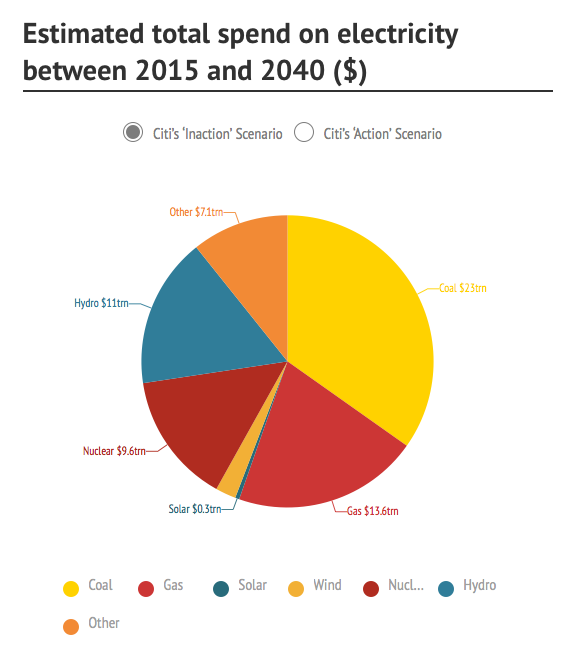 By 2030 Citigroup estimates the cost of power production from renewables will be fully cost-competitive with conventional fuels. However, this benefit is offset by investments in energy efficiency. Therefore in total, the cumulative incremental electricity investment is $1.1 trillion higher for the "action" scenario.

By investing in energy efficiency and substituting coal and gas for renewables, greenhouse gas emissions from the electricity sector are reduced by 9.3 gigatons by 2040 — a 60 percent reduction compared with the business-as-usual scenario.

There is no doubt that overhauling the entire global sector is an ambitious task. But as more research emerges touting the financial benefits of tackling climate change, it may become easier to find the global will to put such ideas into practice.