After years of debate, New York state has adopted congestion pricing to deal with traffic problems in New York City. Starting in 2021, fees will be imposed on all vehicles entering a pricing zone that covers lower Manhattan, from 60th Street at the southern edge of Central Park to the southernmost tip of the island.

This approach has succeeded in cities including London, Singapore and Stockholm. For scholars like me who focus on urban issues, New York’s decision is welcome news. Properly used, congestion pricing can make crowded cities safer, cleaner and easier for drivers, cyclists and pedestrians to navigate.

The details matter, including the size and timing of charges and the area that they cover. Congestion charges also raises equity issues, because rich people are best able to move closer to work or change their schedules to avoid the steepest costs.

The downside of density

Cities concentrate people close together for good economic reasons. Clustering activities allows transfers of information, knowledge and skills. At their best, cities create deep pools of labor and large markets of consumers, and make it possible to provide public goods such as mass transit and trash collection efficiently. Planners should be encouraging cities to become bigger and more dense if we want to improve economic performance.

Should road use be free?

The idea of charging for use of public roads is not new. Economist Arthur Pigou discussed the issue as early as 1920 as part of his attempt to remedy the suboptimal workings of the market system. In 1963, Canadian-born economist William Vickrey argued that roads were scarce resources that should be valued by imposing costs on users.

Consumers intuitively understand differential pricing. We expect to pay more for airline tickets at peak travel times and for hotel rooms at popular times of the year. Congestion pricing also forces users to think about the cost of making a trip, and thus to evaluate their travel patterns.

And it can be effective. A 2008 study gave drivers in Seattle a hypothetical cash sum to spend on trips, charged them tolls linked to traffic congestion levels, and let them keep money they did not spend. Their cars were fitted with equipment to monitor driving patterns.

Success in Europe and Asia

Evidence from cities around the world shows that charging motorists fees for driving into city centers during busy periods is a rarity in urban public policy: a measure that works and is cost-effective. Congestion pricing has succeeded in cities including London, Singapore and Stockholm, where it has eased traffic, sped up travel times, reduced pollution and provided funds for public transport and infrastructure investments.

It also can produce some unintended consequences (PDF). In London, house prices within the congestion charge zone increased — bid upward by consumers who were willing to pay to avoid traffic and enjoy improved environmental conditions. Over the long term, the congestion tax lubricated the gentrification of central London.

But this process is common to many other big cities, with or without congestion pricing: The rich preempt central city locations and displace the less wealthy to the suburbs. 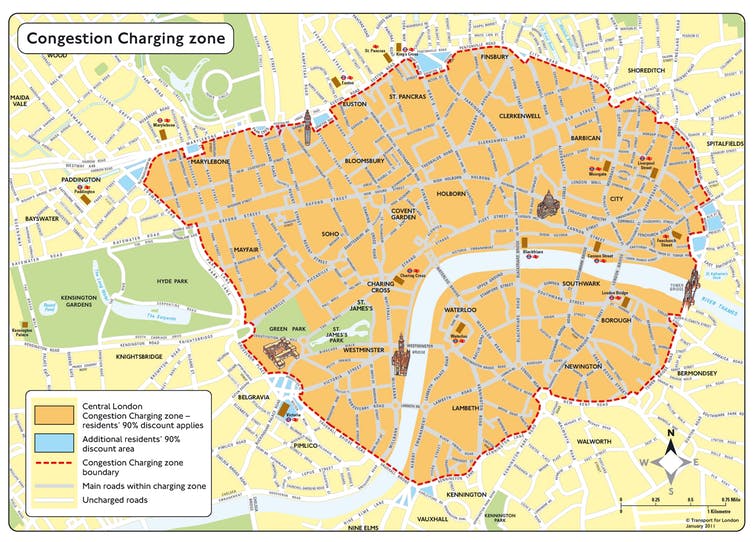 Congestion pricing in the United States

Although the United States has over 5,000 miles of toll roads (PDF), congestion pricing is uncommon. One exception is Interstate Route 66 in the Washington, D.C. metro region, where fluctuating tolls were introduced in late 2017. Pricing for express lanes changes every six minutes during rush hour eastbound in the morning and westbound in the afternoon. The toll hit $40 for a 10-mile stretch the day after it was introduced.

So far, local officials say the policy appears to be working. Carpooling has increased, while backups and crashes have declined. The average toll is currently $8.02 during morning hours and $4.47 during afternoon hours.

But this is just one well-used road, and there are many other routes into central Washington. The I-66 tolls are more about generating revenue on one road than reducing congestion citywide.

New York City is the best U.S. candidate for congestion pricing because it is densely developed and has an extensive public transportation system.

Some observers, such as environmental advocates, are celebrating New York’s decision. But there is pushback from others who claim that it will be regressive. Congestion charges do raise equity issues, but only 4 percent of people who commute into New York City travel by car, and of those, only 5,000 could be classified as working poor. Funding from congestion fees will increase investment in mass transit, which New York Gov. Andrew Cuomo says will benefit the vast majority of New Yorkers who commute by bus or subway.

Details remain to be decided, but under a previous proposal (PDF), cars would have been charged $11.52 to enter the zone on weekdays during business hours, while trucks would have paid $25.34. Taxis and app-based rides such as Uber and Lyft would have been charged $2 to $5. Fees will be assessed by a committee of experts and collected by the Triborough Bridge and Tunnel Authority through an electronic tolling system that already is widely used for bridges, tunnels and tolled motorways across the country.

Unlike other taxes that can be easily dismissed as imposing costs and killing jobs, congestion pricing improves market efficiencies because it forces people to think about their travel and leads to a more rational use of our public roads. It is a powerful policy whose time definitely has come.

This is an updated version of an article originally published Feb. 7, 2018. 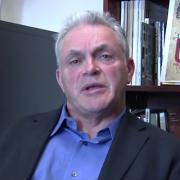 Is your city green? Why measuring sustainability matters

How green is your city? Towards an index of urban sustainability

See all by John Rennie Short