City buses are about to swiftly electrify

Over the next two decades, the world’s city buses will rapidly electrify and convert from diesel-powered to battery-powered technologies much more quickly than passenger vehicles.

The estimate shows how important certain applications and sectors can be for an emerging market such as battery-powered vehicles. At the same time, corporations and other parts of the industry should watch adoption of electric buses closely as it will act as an important bellwether for the rest of commercial electric vehicles.

City buses have unique characteristics that will lead to their swift electrification. The vehicles usually travel reliable, predictable routes and tend to return to a centralized depot where they can be recharged. They also don’t carry too heavy of a load (humans), compared to vehicles such as long-haul trucks.

At the same time, cities have been able to take advantage of a variety of subsidies to bring more electric buses onto urban streets even as they grapple with meeting various mandates that are pushing the electrification of transit. Many cities seek to significantly cut pollution in urban centers due to exhaust from vehicles, so they can help residents breathe cleaner air.

Finally, transit buses usually have long enough routes that can take advantage of the fuel savings of using batteries. But their routes aren’t so long that they go beyond the range of an electric bus battery.

Taking all of these factors into account, electric buses will have a lower total cost of ownership than diesel buses in most cases by 2019, BNEF predicts. Soon it just won’t make sense for a city to buy a bus powered by diesel — it’s entirely more expensive, the researchers project. 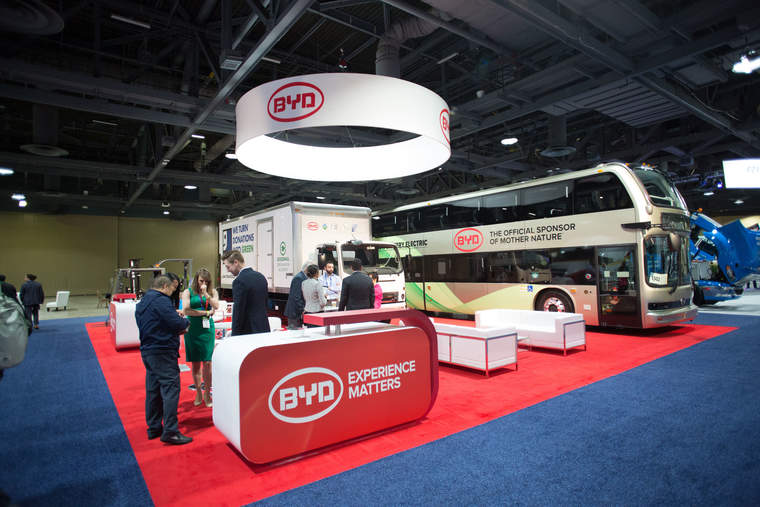 ACTExpo
BYD's booth at ACTExpo featured a bus, a delivery van, a forklift and more.

However, the amount of electric buses sold in the United States is expected to grow by 34 percent per year on average. And by 2025, 5 percent of U.S. city bus fleets are expected to be electric (up from 1 percent last year).

It seems that every week a new American city announces an electric bus plan. Earlier this month, the city of San Francisco announced that it plans to have an all-electric bus fleet by 2035. That means the city will buy only electric buses starting in 2025.

San Francisco Municipal Transit Agency Director John Haley noted in a release that the city is taking its time converting the fleet because electric bus manufacturers aren’t producing vehicles in volume yet, and the technology is still being enhanced to ensure that battery-powered buses can withstand the city’s big hills.

The swift growth of the electric bus market will lead to some significant changes in global battery supplies and world electric demand. Electric buses will make up 2 percent of global battery demand by 2030, BNEF predicted.

Both electric buses and cars combined will lead to a boost in global electricity demand by 6 percent by 2040. The switch from gasoline and diesel-powered vehicles to battery-powered ones will displace 7.3 million barrels a day of fuel by 2040.