So far, big businesses have been involved in 31 transactions for clean power this year (not including onsite generation), the same as for all of 2017, according to data gathered by GreenBiz and the Rocky Mountain Institute’s Business Renewables Center (BRC).

Indeed, the aggregate amount of electricity represented by those purchase agreements was only slightly less than last year’s total.

The biggest single U.S. deal of the quarter was announced by AT&T — its 300-MW virtual power purchase agreement (VPPA) covering two wind farms in Texas brings the total capacity of contracts announced this year by the telecommunications giant to a whopping 820 MW.

It took more than a year to negotiate these projects, estimated Shannon Carroll, director of global environmental sustainability at AT&T. "We've been thinking about this and researching this a long time," he said, including consulting with external experts to understand the landscape of options after the strategy was straight internally. "You have to do your homework." 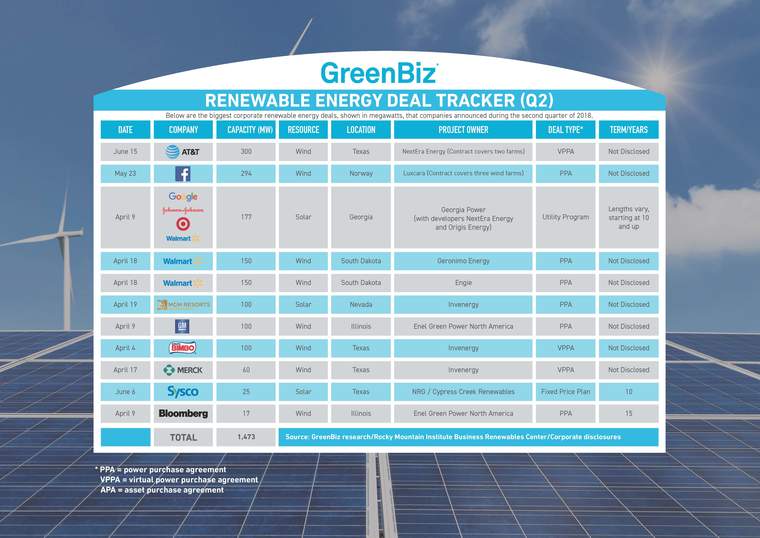 AT&T doesn’t have a specific renewable energy procurement target. Rather, it has committed to a massive carbon reduction plan — with the goal of reducing carbon emissions by 10 times the footprint of its operations. So its energy management strategy includes input from the real estate team, network operations and finance (among others). "You have to be careful not to let one thing dictate everything else," Carroll said.

The second largest contract of the second quarter came outside the United States. Facebook’s 294MW transaction for three contiguous Norwegian wind farms with asset manager Luxcara represents its biggest European deal to date. The project, when it becomes operational in the fourth quarter of 2019, will add more than 1 million megawatt-hours of renewable electricity to Norway’s grid on an annual basis.

The arrangement was made possible through the approval of the utility’s 2016 Integrated Resource Plan (IRP), which committed the utility to adding 1.6 GW of new solar, wind and other renewable resources by 2021. The commitments by the group of four were necessary to help keep prices stable for other Georgia Power customers.

We see the market evolving to accommodate [smaller contracts].

The Georgia Power program has more corporate buyers and developers studying the potential for deals in the southeast United States, said Lily Donge, principal with RMI’s electricity practice. "All bets are off," she said.

The second quarter also demonstrated that creative arrangements for smaller chunks of capacity are becoming more common, said Kevin Haley, program manager for BRC. "More developers are willing to work with the corporate buyer to make things happen," he said. "We see the market evolving to accommodate."

One notable example of that trend is the arrangement announced in June among Sysco, NRG and Cypress Creek Renewables, which covers 25 MW of solar gardens in Texas. The contract is part of a new "fixed price" program that NRG developed for commercial and industrial (C&I) accounts. It covers shorter tenures (seven to 10 years) than typical power purchase agreements (PPAs), offloads much of the risk to NRG and can be sized for smaller loads.

The smallest deal tracked on the chart included with this quarter’s wrap-up was a 17 MW PPA between information and media services organizations Bloomberg and Enel Green Power North America.

Bloomberg is buying a small portion of the capacity from the 185-MW HillTopper project, the first wind farm in Illinois. General Motors is picking up a 100-MW PPA for another big portion of the electricity being generated by the farm.

As of the deal’s disclosure in early April, Enel had orchestrated PPAs covering nearly 400 MW in new renewable electricity supply for C&I customers. In aggregate, it has signed contracts worth more than 1.2 gigawatts for corporate energy buyers.

On paper, AT&T declared the biggest contract, but Walmart actually procured more renewable energy during the second quarter — at least publicly. Aside from being an "offtaker" in the Georgia Power deal, the retailer signed two 150-MW PPAs for wind projects in South Dakota. Those projects will produce 1.26 billion kilowatt-hours annually.

Taken together, the arrangements will more than double the amount of renewable power that Walmart uses across its U.S. locations. The company also plans to add 130 more on-site solar installations, bringing the total to 500 locations.

MGM Resorts moved forward with a 100-MW solar project in collaboration with Invenergy that will power 13 properties along the Las Vegas Strip. The hospitality company has been considering a range of projects after its $87 million decision to part ways with Nevada Energy so that it could procure clean energy. The project, slated to be operational in 2020, will encompass 336,000 panels on 640 acres in the U.S. Bureau of Land Management’s Dry Lake Solar Energy Zone. The array will cover roughly 90 percent of the properties' daytime energy needs.

Intuit announced a program with Just Energy that will allow its customers, employees and business partners in Texas to buy wind-generated electricity at or below traditional retail prices for power.

Grupo Bimbo, the biggest bakery in the world with brands including Sara Lee and Entenmann’s, signed a 100-MW wind farm VPPA with Invenergy that will offset 260,000 tons of carbon dioxide emissions annually and cover 100 percent of the company’s U.S. energy consumption. The farm will become operational in the third quarter of 2019.