Large companies announced deals for at least 1,731 megawatts of capacity in renewable power during the first quarter of this year, in a sign of continued strong corporate demand for clean energy.

The amount of clean energy that businesses contracted for during the first three months of 2018 was more than half the amount that companies agreed to buy during all of last year, according to figures compiled by GreenBiz Research and the Rocky Mountain Institute’s Business Renewables Center.

Five of those contracts were for more than 100 megawatts of wind or solar power (chart below). 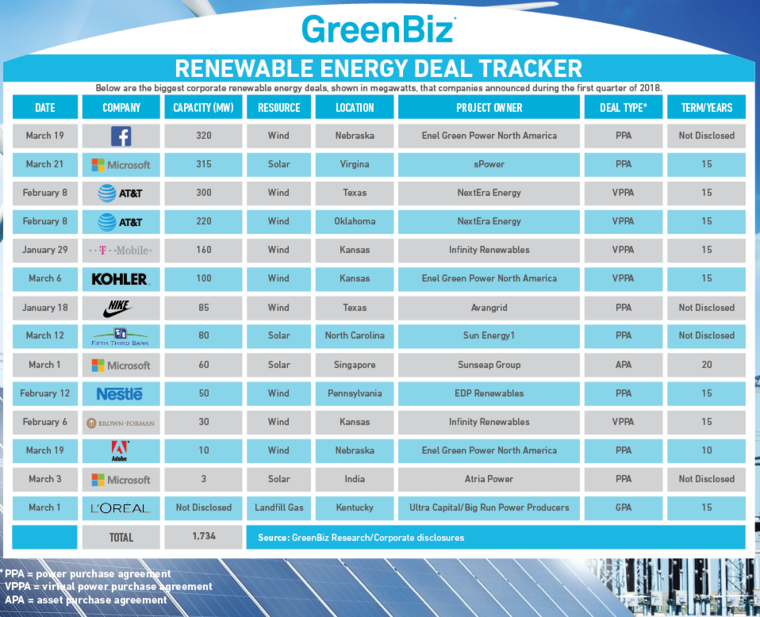 <p><a href="https://www.greenbiz.com/sites/default/files/gbg_renewable_leaderboard_final.pdf">Click chart to view the full-size PDF.</a></p>
Besides the big, early boost, one thing that's different so far this year is the array of creative, unique agreements, said Bryn Baker, deputy director of renewable energy at the World Wildlife Fund and head of the Renewable Energy Buyers' Principles.

"Companies are trying to link their commitment to renewables with deals that show a real impact," she said.

Companies are trying to link their commitment to renewables with deals that show a real impact.

In one example, Nestle's U.S. business signed a 15-year agreement to buy 50 megawatts of power from an Indiana wind farm that will serve Nestle facilities in Pennsylvania. Although Nestle's plants are in a different state from the wind farm, they use the same regional grid and power market, the PJM Interconnection. The 50 megawatts will come from an expansion of an existing wind farm, according to the company.

"In Pennsylvania, they couldn't find a local project that would work for them, but they did want to tell an impact story," Baker said. "They found a project in Indiana that was on the same transmission grid, and because it’s in the same grid region, for all intents and purposes, it's as local as you need to get. We’re seeing more companies that are firing on all cylinders to create options where they are."

Facebook signed a deal in March to buy all the power generated from a 320-megawatt Nebraska wind farm by 2029 to power a new data center in Papillion, Nebraska, about 120 miles from the wind farm.

The bundled, long-term power purchase agreement that Facebook signed with project owner and developer Enel Green Power North America is actually an amended version of a contract the companies signed in November for 200 megawatts of wind power.

The wind farm, Rattlesnake Creek, is under construction and is expected to start generating power by the end of 2018. In a companion contract, Adobe has agreed to buy 10 megawatts of power and renewable energy credits from the project from 2019 through 2028, through a bundled power purchase agreement. Due to supply needs, Facebook will buy all the wind farm's power to serve its data center starting in 2029, according to the companies.

Once fully operational, Rattlesnake Creek will be able to generate around 1.3 terawatt-hours annually, enough energy to meet the equivalent annual consumption needs of more than 105,000 U.S. households, while avoiding the emission of around 940,000 tonnes of CO2 each year.

Microsoft announced in March that it signed an agreement to buy 315 megawatts of power from a Virginia solar farm under development by sPower. It's the largest corporate purchase of solar power in the United States. And the solar farm, which will have a capacity of 500 megawatts when completed, will double the amount of solar power in Virginia, according to the companies.

Microsoft operates more data centers in Virginia than anywhere else in the world, and the company was looking to procure renewables there. It wasn't easy, as Virginia does not have a lot of renewable energy compared to many other states.

We’ve seen significant declines in the cost of renewable energy.

"These projects are cost-competitive where the [power] market is," he said. "We’ve certainly seen significant declines in the cost of renewable energy. A project like this wouldn’t have been viable a few years ago."

French cosmetics giant L'Oreal in March announced a 15-year deal to buy 40 percent of the renewable natural gas that will be produced from a new landfill-gas project under development in Kentucky.

L'Oreal will buy enough renewable gas to match the amount of conventional gas that the company's U.S. operations burn on site.

The company has 17 renewable-energy installations across the country, including on-site solar panels in Arkansas, New Jersey and Kentucky, and wind turbines in Texas. But L'Oreal wanted a renewable energy deal that would be big enough to offset the carbon footprint of all of its U.S. operations, including their thermal energy use, and that would lead to the construction of a new renewable-energy facility.

Among L'Oreal's six U.S. factories and 15 distribution centers, its hair product factory in Florence, Kentucky, is its largest facility and has the biggest carbon footprint. So it made sense to find a renewable-energy project in Kentucky, said Jay Harf, vice president of environment, health, safety and sustainability at L'Oreal USA.

"One of the things we learned from this project is that we're sitting on a huge source of renewable energy just by the mere fact of active and inactive landfills in this country," he said. "There are over 13,000 landfills, with less than 1,000” that capture the gas and use it for energy.

We're sitting on a huge source of renewable energy just by the mere fact of active and inactive landfills in this country.

The Big Run Landfill in Ashland, Kentucky, where the project will be built, contains more than 750,000 tons of trash. Landfill operators flare, or burn off, more than 500,000 cubic feet per day of landfill gas, which is about half methane and half carbon dioxide, according to a document (PDF) published by the state of Kentucky.

Burning off the gas prevents the methane, a greenhouse gas that is 84 times more potent than CO2, from entering the atmosphere, and also prevents fires and explosions.

L'Oreal declined to say how much renewable gas it has agreed to buy, or how much gas its operations burn each year.

The landfill gas project, developed by Ultra Capital unit Big Run Power Producers, will include a new processing facility that will clean and process the landfill gas, and a pipeline that will allow the gas to be shipped to the regional gas pipeline network.

The gas will be costly. Renewable natural gas prices are as much as eight times those of the conventional fossil fuel, Harf said.

Natural gas traded at the benchmark Henry Hub was recently $2.71 per million British Thermal Units, according to the Energy Department. Which means that renewable gas could fetch more than $21 a million Btu.

To break even on the contract, L'Oreal plans to strip off the renewable attributes of the renewable gas, Renewable Identification Numbers, or RINS, and sell them into the transportation fuels market during the first five years of its agreement. Oil refiners and other fuel marketers buy RINS to comply with the federal Renewable Fuel Standard.