The pace of corporate-championed renewable deals slowed considerably during the third quarter, compared with the previous three months. But Q3 brought several new buyers to the table, including food giant J.M. Smucker and healthcare concern Novartis. What’s more, Q4 is shaping up to be a blockbuster quarter for contracts.

Businesses procured an additional 770 megawatts of wind and solar energy during the quarter ended Aug. 31, compared with almost 1,500 MWs in the previous three-month period, according to figures gathered by GreenBiz and the Rocky Mountain Institute’s Business Renewables Center.

If you take those arrangements into account, businesses have procured more than 5 gigawatts (GW) of renewable power this year, predominantly from wind and solar projects in the United States, although more organizations notably are looking for opportunities abroad. Considered another way, that means corporate buyers already have procured more clean energy in 2018 than for both 2016 and 2017 combined. And the year is far from over.

"Buyers are telling us they are more comfortable making these kinds of commitments," said Lily Donge, principal with RMI’s BRC, speaking in mid-October during the annual summit of the Renewable Energy Buyers Alliance (REBA). 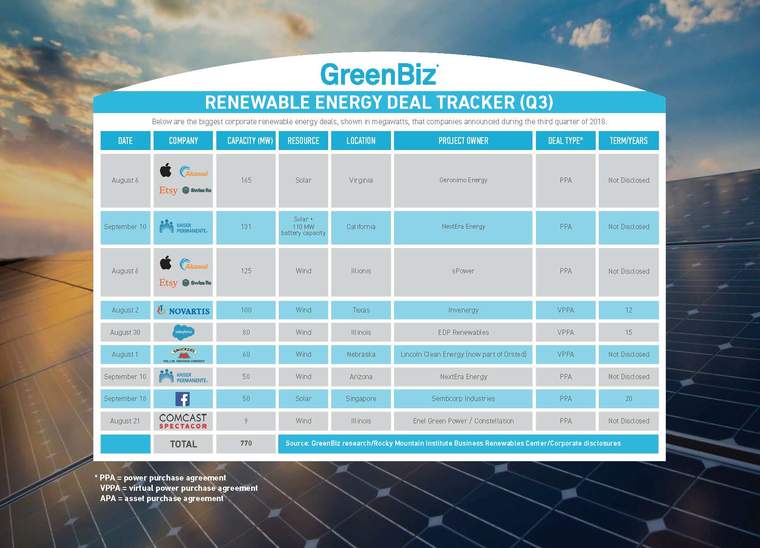 While (PDF) technology companies still lead when it comes to the sheer amount of energy procured, companies from the consumer discretionary sector have jumped in with both feet during the past 12 months, she said.

That’s thanks both to the emergence of more options from utilities (more than 21 green tariff programs are in place across the United States) and new, simpler contract options from developers, Donge said. Corporate deals have been done in 26 states, with Utah among those adding their first ones during 2018, she noted.

"Suppliers have been flexible in meeting needs," Donge said. There are more opportunities than ever for corporate buyers to collaborate on greening the grid, she said.

After roughly a year of evaluation and negotiations, the 120-year-old company behind brands such as Smucker's jam, Crisco vegetable shortening and Dunkin’ Donuts coffee in August announced it had signed a power purchase agreement (PPA) for 60 MWs of the 230-MW Plum Creek Wind Project in Wayne County, Nebraska.

When the project starts generating power in 2020, it will offset about 50 percent of Smucker’s electricity usage. The developer behind the deal is Lincoln Clean Energy (now part of Orsted), which develop about 2 GW of wind power during 2017.

Julia Sabin, vice president of government relations and corporate sustainability for Smucker, said electricity accounted for about half of the organization’s greenhouse gas (GHG) emissions in 2017. "The project is meaningful to our company in this space," she said. "We have a strong initiative to optimize our manufacturing plants as well."

Buyers are telling us they are more comfortable making these kinds of commitments.

Smucker doesn’t have a specific renewable energy procurement target. Rather, its mission is to reduce the carbon intensity of its GHG emissions by 10 percent by 2020, based on a 2014 baseline. It previously invested in solar arrays for its manufacturing operations in Chico, California, and Havre de Grace, Maryland. Smucker originally considered a smaller PPA but increased the size to drive more of an impact, said Rebecca Ott, director of sustainability for Smucker. "We are looking at how we stay in step with the industry," she said.

As a first-time buyer, it took a while for Ott and Sabin to get its team comfortable with the tenure of this agreement: Smucker’s strategic planning looks out three to five years, and the PPA is longer than that (although the company hasn’t revealed the exact length). Among the considerations during the negotiations:

Are more PPAs in Smucker’s future? It’s too early to say, according to Sabin and Ott, but you can expect the food company to prioritize additional energy efficiency measures at other U.S. manufacturing sites.

The virtual PPA announced in early August by healthcare company Novartis, meanwhile, is in the crowded Texas wind market. Its contract, with developer Invenergy, is for 100 MWs of wind-generated electricity from the Santa Rita East farm, about 70 miles west of San Angelo, Texas.

The 12-year-long deal is expected to match more than 70 percent of the Novartis carbon footprint related to U.S. electricity consumption, by reducing an estimated 220,000 metric tons per year.

We are looking at how we stay in step with the industry.

"This agreement is in line with our sustainability strategy and is expected to help us reduce our carbon footprint, constrain costs and increase green power solutions," said Karen Coyne, global head of environment at Novartis, in a statement. "Energy efficiency is the cornerstone of reducing the company’s carbon footprint while also pursuing renewables initiatives in multiple markets."

In reviewing the list of deals disclosed during the third quarter, several stand out as examples of innovations that could enable a greater number of companies to participate in corporate renewables procurement, or that signal other evolutions that could reshape the landscape over the next 12 months. Here’s my short list:

Apple’s collaboration with Akamai, Etsy and Swiss Re: As reported in August, the four companies got together to sign deals for 290 MWs for a wind farm near Chicago and a solar installation outside Fredericksburg, Virginia. Without Apple’s participation, the other companies would have found it difficult to participate in these projects. "They [Apple] provided, for us, a safety net," said Lasse Wallquist, senior sustainability risk manager for Swiss Re, told me. The arrangement could be a model for future "aggregations" that help additional small and midsize companies source renewable energy to meet their climate commitments.

Facebook’s first deal in Asia: The social media company inked a 20-year-long arrangement with Sembcorp, a developer in Singapore with one of the country’s largest solar portfolio. The contract covers 50 MW of power that will be installed across 900 rooftops, enough to support Facebook’s new data center there.

Kaiser Permanente’s latest PPA, which includes a massive amount of energy storage: The healthcare provider is contracting for another 180 MWs of solar and wind electricity, enough to cover the power consumption for 27 of its 39 hospitals. Kaiser is the largest RE buyer among its peer group, using more than 1 million megawatt-hours (MWh) annually. The latest deals include a contract for 110 MWs of battery capacity attached to a solar installation in Riverside, California — one of the largest projects of its type.

Comcast Spectacor is buying 9 MWs from the 185-MW Hilltopper wind farm in Illinois. That’s enough to serve the 20,000-seat Wells Fargo Center in Philadelphia (home to the Flyers hockey team); the power actually will be fed into the same electricity market. The deal was made possible through a partnership between Constellation and Enel Green Power.

Meanwhile, Herman Miller has contracted with Constellation for about 25,000 MWhs of wind energy from the Harvest II project in Elkton, Michigan, which is managed by Exelon Generation. The deal covers the furniture company’s steel manufacturing locations in nearby Spring Lake, which represent about one-quarter of Herman Miller’s global energy consumption. The four-year-long arrangement is the first such deal in Michigan.

"This project will help us meet our sustainability goals — and doesn’t negatively impact our business," said Gabe Wing, director of safety and sustainability for Herman Miller, in a statement. "We will continue to reduce our carbon footprint through energy efficiency projects and supporting green energy projects like Harvest II where the market allows."