Over the weekend, I had the opportunity to have a midair conversation with Bertrand Piccard who, at the time, was on the home stretch of a solo flight across the Pacific in a plane powered entirely by 17,248 solar cells.

At the time we spoke on Saturday morning, the 58-year-old Piccard, scion of a long line of Swiss scientific explorers, had been at the controls of the Solar Impulse 2 for more than two days straight and was about 350 miles off the coast of California, headed toward a landing at Moffett Field in Mountain View, Calif., on Saturday night, puttering along at under 40 miles per hour.

(You can listen to my conversation with Piccard using the controls at the top of the page.)

The flight from Hawaii took 62 hours, about 12 times the duration of today’s jetliners traveling from Hawaii to the West Coast. And it was a fraction of the speed another pioneer, Amelia Earhart, flew when she took a similar journey, between Oakland and Honolulu, in 1935, the first person to fly solo on that route.

But speed wasn't the point. The point was that this flight was taking place with only sunshine for fuel.

Piccard, a psychiatrist and explorer known for the first successful non-stop balloon circumnavigation of the globe, is partnering in this adventure with André Borschberg, an engineer and entrepreneur with a passion for environmental innovation, who is sharing the flying duties. The latest flight was Piccard’s. 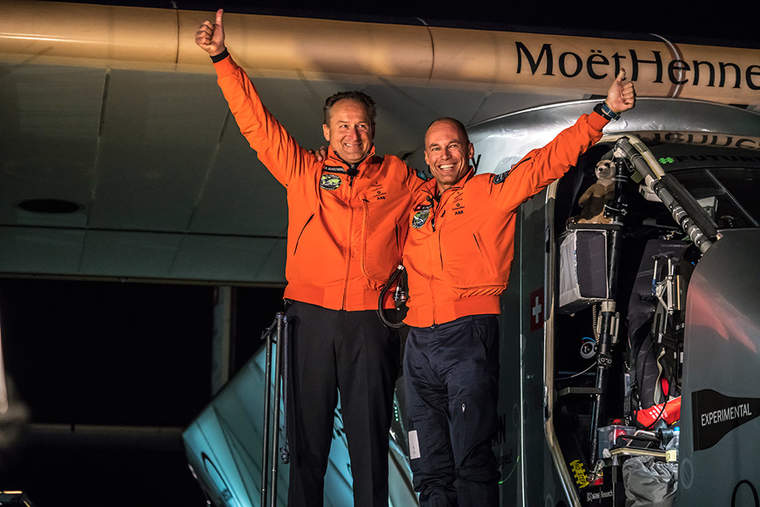 It was the ninth leg of a round-the-world journey — sponsored by Solvay, Omega, Schindler, Google and ABB, among others — that began in Abu Dhabi in March 2015, and has since touched down in Oman, India, Myanmar, China, Japan and the United States. There are more stops planned in the U.S. before flying the Solar Impulse across the Atlantic to Europe and, eventually, back to Abu Dhabi — about 22,000 miles in all, without a drop of fuel.

It hasn’t gone without a hitch. The aircraft landed in Hawaii last July but was grounded there for nine months after the plane's battery system sustained heat damage during its trip from Japan. The plane was delayed in Asia, too: On its first attempt to fly from Nanjing, China, to Hawaii, the crew had to divert to Japan because of unfavorable weather and a damaged wing.

But Piccard, when we spoke, was sanguine about all that, focusing instead on what their adventure has proved to the world about the worldchanging potential of clean technology.

“It is challenging, it’s not easy,” he told me, noting that there have been frustrations and disappointments along the way. “But each time, you learn to do something differently, and you learn to do it better.”

As it happened, Piccard’s last full day of flight on this leg was Earth Day, when representatives from 175 nations gathered at the United Nations in New York to sign the Paris Agreement, the climate pact forged during COP21 in December. Piccard addressed the dignitaries assembled at the U.N. for the signing, imploring them to “Be pioneers, be adventurers, be explorers of the solutions of today.”

He added: “Clean technology can achieve impossible things, like flying day and night with no fuels in a solar airplane.”

I asked Piccard how the Solar Impulse’s mission was being received as the plane hopscotched from country to country. Was there universal excitement about the mission?

“It is received very well everywhere, but for different reasons,” he responded. For example, in India, the solar plane tapped into the keen interest there in providing energy access for poor people in remote regions. In China, the conversation was about potential of renewables to fight pollution, notably the choking air quality in Chinese cities. In the U.S., “the land of pioneers and innovators,” says Piccard, it is about innovation and opportunity. In Europe, it’s mostly about protecting the environment. 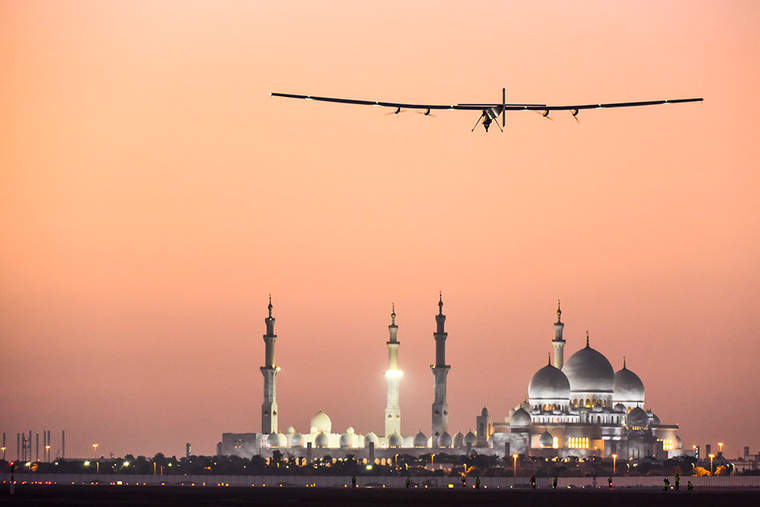 Beyond being an ambassador for cleantech, the innovations gained from the Solar Impulse will also lead to new ways to power aviation. And while it may be a long while before we can fly coast to coast on Sun Power Airlines, Piccard says  the technology coming out of this project is already helping power a new generation of high-altitude, pilotless planes capable of providing a range of services, from Wi-Fi and GPS to telecommunications and data for farmers — all without having to refuel. Suffice to say, it's a huge potential business opportunity.

Which is to say, for Piccard and his team, there is no place to go but up.

Charting a new course: How innovative businesses can lead the way to greener solutions