Cleaning up the carbon footprint of that Amazon Prime purchase

You know those recently-delivered boxes stacked up near your front door? They're more than piling up — they're shifting the tectonic plates beneath long-established shipping, logistics and last-mile delivery networks.

On-demand shipping and e-commerce, of course, are booming. Amazon's Prime shipping is moving toward the almost-instant one-day delivery, from the previous tortoise-like two days (kidding).

But that means that the shipping-related carbon emissions associated with e-commerce are growing, and freight companies are under increasing pressure to figure out ways to reduce those emissions and to ultimately decarbonize.

The entire shipping supply chain is complex, and the environmental repercussions of it are dependent on where the shipped item is coming from and going to, and what mode of transportation is used in between. But, in general, in the United States, most of the carbon emissions from shipping come from the heavy-duty trucks moving goods across regions, and the delivery trucks dropping off the box(es) that end up in a pile at your front door.

Both semi-trucks and delivery trucks mostly use diesel as a fuel source. Ways to squeeze out emissions from freight trucking include: the electrification of vehicles; using lower carbon fuels (biofuel, renewable diesel, renewable gas); using micro-solutions for last mile (such as bikes); fuel efficiency measures on vehicles, and logistics efficiency programs (such as grouping more packages into vehicles and more items in boxes). I'm sure I'm missing some.

There are also emissions associated with the distribution centers that temporarily store your goods while they're on their way to you. Slashing emissions from these buildings requires the typical things, such as clean energy-powered electricity, efficient lighting and electric or fuel cell forklifts for moving packages. 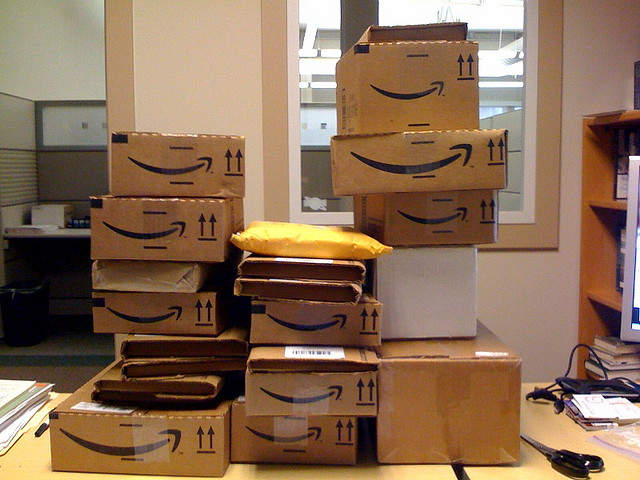 If your item came by rail, some emissions from the diesel are used to power locomotives, but rail is dramatically more efficient than trucking. There's also air shipping, and planes use fossil fuel-based jet fuel. The leading way to reduce greenhouse gas emissions from air shipping is fuel efficiency, but biofuels are currently the big great hope for sustainable air freight.

If your items came from another country, then carbon emissions are associated with the sea-faring container ship that moved it. (A good backgrounder on this is the Environmental Defense Fund's Green Freight handbook (PDF)). Container vessels typically use (super dirty) bunker fuel and increasingly, diesel fuel.

Programs to lower maritime shipping emissions include using lower-carbon fuels; the electrification of onshore energy use in ports; electric cargo-handling equipment; batteries for the vessels themselves; slowing down ships to make them more efficient; and logistics efficiency programs.

So, yeah, there's a lot of early-stage exploration going on, scattered across the whole chain. The good news is that in 2019, major discussions are going on around how to more widely commercialize and scale some of these ideas. And some of that is being led by retailers that depend on e-commerce to move their goods.

The path to decarbonizing quick shipping for brands, freight companies and consumers already has hit a solid amount of friction — but some progress is on the horizon.

[Interested in decarbonizing e-commerce? First, I'm hosting a webinar on the path forward for low-carbon shipping on June 11 (including Etsy's sustainability lead Chelsea Mozen, and others). You should sign up and tune in, and learn about this growing trend. I'm also planning a half-day workshop on this topic at our VERGE 19 event later this year, so if you have suggestions or thoughts, send me ideas ([email protected]). I'd love to hear about what your company is working on.]