Presidents and prime ministers have limited policy control over national carbon footprints. Subnational entities can prove that "We Are Still In."

Reaching the goals set out in the 2015 Paris Agreement on climate change depends in large part on the leadership and action of corporations, cities, states and provinces, universities and a wide range of civil society organizations. It is clear that maintaining decarbonization momentum will require a new emphasis on action below the national level, which would mark a break with traditional diplomacy that relies on national governments to negotiate and carry out commitments. Beyond being necessary given the sweeping scope of what’s required to reduce the atmospheric buildup of greenhouse gases, this break from the past creates two timely and related opportunities.

First, the parties to the Paris Agreement could strengthen the global resolve to address climate change by allowing mayors, governors, premiers, corporate executives and other non-federal leaders to sign on to the agreement on behalf of their organizations. Providing these "subnational" entities a formal way to show their commitment to climate change action would signal that despite the backsliding of the current U.S. administration — including its announced intention to withdraw from the Paris accord — decarbonization continues across the country and around the world.

Second, a unified structure for emissions reporting could be created for subnational actors that sign on to the Paris Agreement, giving a broader and clearer picture of the many levels of the global response to climate change that are underway. More comprehensive and accurate greenhouse gas emissions accounting would sharpen the focus on climate change activities at every scale, highlight successful policies and ensure that performance shortfalls are quickly spotted. What gets measured gets managed. With global CO2 emissions rising in many countries as the world economy strengthens, measuring and reporting emissions takes on added urgency as a way to signal where the combustion of fossil fuels is going in the wrong direction.

A diverse group of governors, mayors and CEOs have been demonstrating what a bold response to climate change looks like.

Presidents and prime ministers have limited policy control over the actions that shape their nations’ carbon footprints. Success in addressing climate change will require action by many individuals and organizations, including governments at the state and local levels. Given this reality, we think it is time to recognize subnational actors for their critical role in meeting the climate change challenge. Over the last few years, a diverse group of governors, mayors, CEOs and other leaders have been demonstrating what a bold response to climate change looks like, advancing real solutions and taking ownership of the problem.

California Gov. Jerry Brown, for example, has committed his state to generating 50 percent of its electricity from renewable sources by 2030 and to increasing the number of electric cars and other zero-emissions vehicles from 250,000 today to 4.2 million by the end of the next decade. Actions to realize these goals have included extending California’s cap-and-trade program, becoming the leading state in the country for installed solar panels, and signing a cooperation deal with China to jointly reduce emissions.

Brown’s predecessor, Arnold Schwarzenegger, added global momentum to the work of governors and premiers across the world when he helped found the R20 group — Regions of Climate Action — which has rallied subnational leaders to collaborate on climate change. At the municipal level, C40, a group of pioneering mayors, counts nearly 100 large cities as members and has launched a bold climate agenda, including "14,000 climate actions" that are being undertaken by cities across the world. Cumulatively, these large cities account for 25 percent of global GDP and one in 12 of the world’s people. Likewise, the Global Covenant of Mayors for Climate & Energy has helped more than 7,500 cities combat climate change and move toward lower emissions and more climate resiliency. These cities account for more than 700 million people in 124 countries. 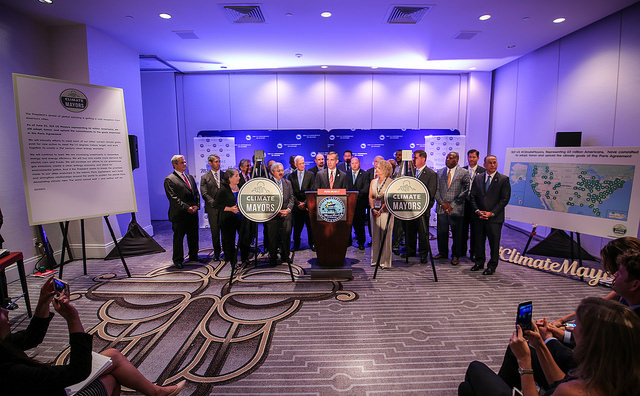 In the United States, the We Are Still In movement, launched in response to President Donald Trump’s rejection of the Paris Agreement, has brought together more than 2,500 leaders from various state and local governments, corporations and universities since it was launched in June. It is indeed striking to see how many business leaders have not supported the president’s pullback from the global climate consensus, even if Trump’s actions might have produced some short-term corporate cost savings in the form of reduced regulatory pressures. Clearly, many CEOs have concluded that their companies need to be contributors to a sustainable future and that the transition to a clean-energy economy offers opportunities, not just burdens.

The private sector has a number of organizations working to offer climate action leadership. The We Mean Business Coalition includes more than 670 corporations across the globe, accounting for roughly $15 trillion in market capitalization, and all committed to significant climate action. More than half of these leading corporations — including Walmart, General Mills and Colgate-Palmolive — have explicitly have signed up to meet science-based targets aimed at reducing greenhouse gas emissions in line with the Paris goals.

Investors are also moving to build climate action and sustainability into their portfolios. BlackRock’s chief executive, Larry Fink, recently made global headlines when he said that companies need to think about how they are advancing social and environmental progress alongside their financial return. Fink’s statement drew widespread attention not only because of its progressive message, but also because of the influence of the messenger: BlackRock is the largest U.S.-based investment management corporation, with more than $6 trillion in investments. Dozens of other investment firms have launched climate change or sustainability funds to meet the needs of the growing number of mainstream investors who want to better align their investments with their values.

The Paris Agreement should have a mechanism to formally recognize the commitments and actions of non-national entities.

Given the critical role that corporations and non-national entities are playing in the climate fight, we believe that the Paris Agreement should have a mechanism to formally recognize their commitments and actions. Some policymakers and legal scholars — trapped in the framework of international relations that has been in place since the Peace of Westphalia in 1648 — argue that only national governments can be signatories to treaties and other international agreements. But why should this be so in the 21st century? If the structure of the problem to which an agreement is addressed requires action by more than just national governments, why not accept signatures from other entities, signaling their commitment and engagement?

We think the logic for drawing mayors, governors, CEOs and NGO leaders into the global response to climate change is overwhelming and can be accommodated within the structure of the Paris Agreement. The most promising pathway appears to be a so-called "Conference of the Parties decision," which would set out an addendum to the 2015 agreement providing a mechanism for subnational and corporate leaders to formally commit their organizations to action. It could read something like: "We, the undersigned Mayors, to the full extent of our authority, commit our cities to advancing the goals of the 2015 Paris Climate Change Agreement."

Separate signature mechanisms for governors, CEOs and perhaps other categories of institutional leaders, such as university presidents, could be similarly constructed. Pioneering this new format of international agreement would be more inclusive and formally would recognize the multi-level commitment required to make the goals of the Paris Agreement a reality.

Creating a shared structure of accountability for both countries and subnational leaders is a parallel second opportunity that could provide a single venue for declaring climate change commitments; a mechanism for establishing and harmonizing greenhouse gas-reduction targets; and a unified framework for measuring greenhouse gas emissions across national and subnational entities.

Countries currently report on their progress on climate change only on a national basis through the UN Framework Convention on Climate Change. Cities, states, provinces and companies all report with varying methodology and formats. We would like to see these efforts coordinated in a unified and consistent way, allowing these groups to both assist and push their own countries to make increasingly rapid and deep cuts in greenhouse gas emissions.

Under a unified system, emissions-reduction success stories could be more easily shared across the world.

The Intergovernmental Panel on Climate Change already has produced good-practice guidelines that would form a solid foundation on which to build; these guidelines currently provide a common, rigorous method of emissions accounting, validation and measurement for countries. Under a unified system, emissions-reduction success stories could be more easily shared across the world, and for the first time, countries knowingly could factor into their plans the important work being done at subnational levels, creating an upward spiral of progress and knowledge.

For the unification of reporting systems to be tackled, the good practice guidelines would need to be updated for countries as well as for cities, states, businesses and NGOs. We believe that industry-by-industry analysis will be required to ascertain which systems of emissions accounting are best suited for a unified approach.

A refreshed set of guidelines could do for emissions accounting what generally accepted accounting principles did for financial accounting, establishing clarity, comparability and integrity. With such a framework in place, the world would be able to measure and thus manage the collective task ahead of bringing down greenhouse gas emissions.

Formally incorporating the actions and aspirations of subnational entities into the Paris Agreement makes great sense at a time when many are worried that support for real action might be faltering. Broadening, unifying and strengthening greenhouse gas emissions measurement and reporting would help identify the leaders, the laggards and the emissions-control strategies that work. It would send a powerful signal that the Paris Agreement is alive and well.

Resident Fellow
Yale Center for Business and the Environment
@b0ydie

See all by Daniel Esty