Climate and cash: A G20-approved guide to disclosure

As director of sustainability for Bloomberg LP and a driving force behind the Michael Bloomberg-led Task Force on Climate-Related Financial Disclosure, he wants companies to use the task force's new disclosure how-to guide to jump-start existing reporting efforts — not to add the group to your mailing list of sustainability reporting bodies.

"No, please don't do that," Ravenel said. "It asks you to disclose as you would normally disclose."

Cognizant of the "survey fatigue" phenomenon often lamented in sustainability circles, the 74-page document (PDF) from the task force housed within the G20's Financial Stability Board officially offers "recommendations for disclosing clear, comparable and consistent information about the risks and opportunities presented by climate change," Michael Bloomberg wrote in the report.

Under the leadership of Bloomberg and Financial Stability Board Chair Mark Carney, the report comes a year-and-a-half after the launch of the task force and includes input from member companies and investors such as Daimler, Dow, BlackRock and JP Morgan Chase. Although publicly traded companies are the primary audience, Ravenel said the guidance was "written to be adopted broadly."

Among the topics covered are why companies should take climate change seriously as a variable impacting financial performance, what constitutes useful financial disclosure and how scenario planning could be used to better brace businesses for increased volatility in both resource availability and geopolitical conflict.

The recommendations become part of a crowded landscape for sustainability guidance and reporting frameworks available to companies across industries. Although most sustainability reporting is still voluntary, the task force report also includes tips for mandatory financial disclosures.

Among other external groups active in sustainability or climate reporting are those focused on carbon emissions (CDP), sustainability accounting metrics (SASB) and other third-party groups focused on the ways companies affect people and the planet (GRI, DJSI, GRESB, TSC).

"People tend to look at them as very prescriptive. We constantly have to fight that," Ravenel said of the task force's approach. "Some questions will resonate with certain types of issuers, and some will not."

The concept of risk is increasingly present in reports urging global business action on climate change from bodies such as the World Economic Forum. But what, exactly, makes environmental turmoil a financial risk for companies?

That's one of the central questions tackled in the task force's report, which divides corporate risk into two camps: the physical risks posed by climate change; and the political and financial risks that could stem from the transition to a low-carbon economy. 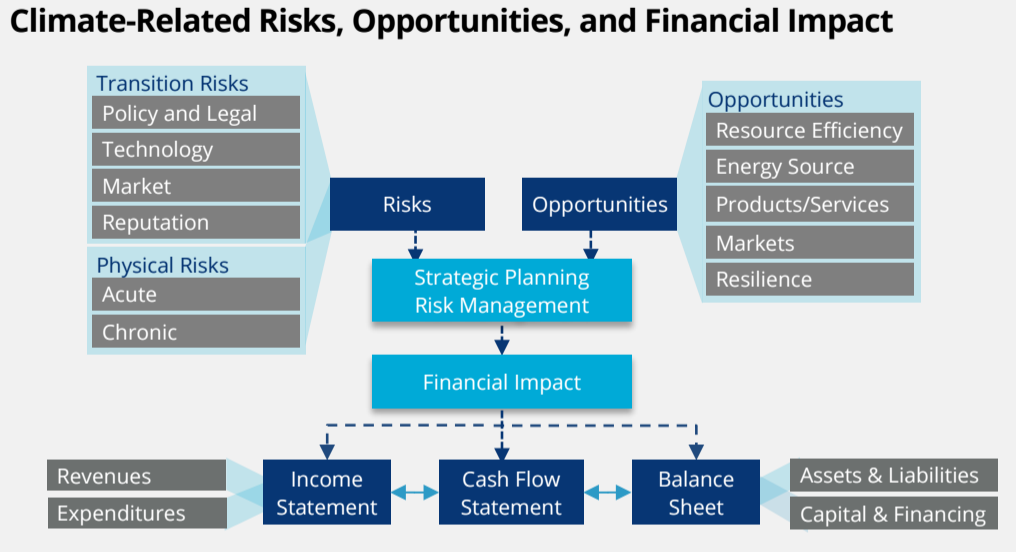 As to what that means for how companies should adapt their existing regulatory or third-party sustainability reporting, the report forecasts that these risks — and low-carbon market opportunities — could manifest in everything from core revenues and balance sheets to longer-term capital positioning and expenditures.

"Supply and demand changes from changes in policies, technology and market dynamics related to climate change could affect the valuation of organizations' assets and liabilities," the report notes, specifically highlighting the increased prominence of global carbon pricing systems. "It is important for organizations to provide an indication of the potential climate-related impact."

One facet of adapting companies to a world where climate change registers as a mainstream business risk is moving from abstract, high-level discussion to more detailed scenario planning.

It's this realm, digging into detailed scenarios for different climate outcomes — a world with 1.5-degree Celsius higher average temperatures, versus 2 or 4 degrees, for example — that Ravenel expects to become much more important to companies reporting on the financial implications of climate change.

“That’s the area I think is the least developed," Ravenel said.

He added that there could be a role for the task force to play in developing more specific guidance on scenario planning now that the Financial Stability Board has extended the group's existence until at least 2018. In the meantime, Ravenel said the task force will look to assist interested companies with implementation of disclosure recommendations and hopes to see integration with major reporting bodies.

Ultimately, information will flow freely across all of these different platforms. I think there’s going to be a lot of experimentation.

Still, as is evident with the rise of "science-based" targets when it comes to corporate emissions reductions, one underlying key is the quality of data and disclosures supplied by businesses.

What form that disclosure takes — and whether more regulators move to make climate disclosures mandatory rather than voluntary — will be the big question moving forward, particularly as technology changes expectations about monolithic annual reports versus more detailed or real-time information.

“Ultimately, information will flow freely across all of these different platforms," Ravenel said. “I think there’s going to be a lot of experimentation."