Climate bonds surpass expectations, but where are U.S. corporations?

At the same time, the fledgling sector is still struggling to deliver the exponential growth that experts believe is needed to support the goals of the Paris Agreement on climate change and mobilize a trillion dollars a year of low carbon investment by 2020.

That is the conclusion of the latest report from the Climate Bonds Initiative (CBI) (PDF), which was released last week and confirmed another record year for the sector.

As 2017 counted down, the body was anticipating the market would reach up to $130 billion for the year — an impressive performance that would have seen the sector break the $100 billion mark for the first time and deliver around 60 percent growth on the $87.2 billion recorded in 2016.

However, a late flurry of activity saw the market surpass both CBI's latest projection and its initial "optimistic" projection for the year of $150 billion of bond issues. Overall, $155.5 billion spread across 1,500 green bonds issues were released by 239 issuers, as records toppled across the sector.

Overall, $155.5 billion spread across 1,500 green bonds issues were released by 239 issuers, as records toppled across the sector.

High points included a record $8.57 billion sovereign bond issue by the French government, followed by further sovereign issues in France and the first sovereign bonds from Fiji and Nigeria; a record-breaking $24.9 billion of bond issues from U.S. financial giant Fannie Mae through its green Mortgage-Backed Securities program; and major green bond issues worth over $4 billion each from the China Development Bank, the European Investment Bank and New York MTA.

However, the U.S., China and France continued to dominate, accounting for 56 percent of all issuances between them. Germany, Spain, Sweden, Netherlands, India, Mexico and Canada completed the top 10. 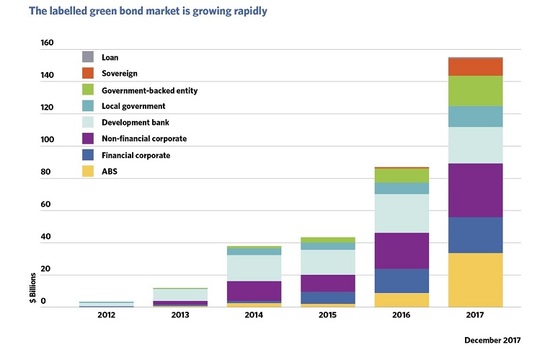 The report also detailed how the revenues raised through bond issues are being put to good use. Renewable energy projects were once again were the largest single beneficiary of green bond issues, but their share of the market still fell from 38 percent in 2016 to 33 percent last year.

Meanwhile, investment in low carbon building projects more than trebled to account for 29 percent of the market and bond issues for green transport projects doubled. In contrast, bonds linked to waste, land use and climate adaptation remained a small part of the market — a trend CBI attributed in part to a lack of clear definitions on which project types qualify.

The hope is that an upcoming update to the Climate Bonds standard will make it easier for investors and intermediaries to assess the environmental integrity of green and climate-related bonds. At the same time, observers are keen to see a wider push across the finance community to accelerate the entire green bonds market this year.

The hope is that an update to the Climate Bonds standard will make it easier for investors and intermediaries to assess the environmental integrity of green and climate-related bonds.

CBI Chief Executive Sean Kidney said the performance in 2017 had been encouraging but was still short of the growth the sector had to deliver to meet the Paris Agreement's goal of keeping temperature increases well below 2 degrees Celsius.

"It's ended up 78 percent growth, but we wanted to double the market," he said. "It's a fast-growing market, but it's not enough."

He said the market had been hamstrung by a number of factors, such as interest rate volatility in China and the failure of many governments to deliver long-awaited sovereign green bond issues. "We know a lot of countries are looking at doing it but very few of them have gotten round to doing it," Kidney said.

"The other sector that is largely absent is U.S. corporates," he added. "We don't know if they are getting caught up with the Republican politics or what it is, but with a few exceptions they are not coming to market."

However, Kidney insisted there were reasons to be optimistic the market could scale quickly. CBI is predicting $250 billion to $300 billion of green bond issues this year and stated its bullish outlook is shared by most top investment banks.

In particular, Kidney pointed to the potential for the sovereign bond market to start issuing big multi-billion dollar green bonds. "We saw ($12.25 billion) from France in 2017 and lots of other sovereigns are looking at it," he said. "Belgium has said they will do one and Sweden is looking at it, too. There is potential to get scale very quickly there."

Just this week, a separate research note from credit ratings agency S&P predicted the Nordics would continue to play a key role in the market as public sector bodies continue to issue new green bonds. "We anticipate rising green bond issuance by Nordic public-sector issuers, which should further enlarge the market for these instruments," the report stated.

It's ended up 78 percent growth, but we wanted to double the market. It's a fast-growing market, but it's not enough.

Meanwhile, China and India are both expected to keep expanding their interest in the green bond market to fund their ambitious low carbon infrastructure plans, and more corporates are also set to turn to green bonds to fund their sustainability plans.

In a separate statement, Kidney said he expected more and more banks to enter the market. "With the world's largest bank in China, ICBC, and other leaders from Europe to Australia issuing green bonds, expectations will grow on all the top 200 banks to commence green lending programs," he said.

This trend could receive a further boost following confirmation late last year that the EU is looking at allowing new covered bond issues and asset-backed securities for emerging asset classes such as electric vehicle infrastructure and green mortgages.

However, in his statement Kidney stressed that the need to keep scaling up the market had never been clearer.

"There's now three vital years to reach the Mission 2020 milestone of $1 trillion in green finance by end 2020," he said. "The final results for 2017 provide some foundation but must be doubled and doubled again by the end of the decade. The spotlight is now firmly on financial system actors, banks, insurers, corporates and institutional investors to achieve this vital 2020 climate investment target."

How common standards could spur growth in green finance

Inside the Climate Bonds Initiative with Sean Kidney

Stores are essential for the Loop reusable packaging program

Resale and rental models are growing rapidly in the fashion industry

4 conversations we should have about energy resilience