Warmer and wetter growing seasons are making yields decrease in some locations, but boosting others.

Farmers are used to dealing with weather, but climate change is making it harder by altering temperature and rainfall patterns, as in this year’s unusually cool and wet spring in the central United States. In a recently published study, I worked with other scientists to see whether climate change measurably was affecting crop productivity and global food security.

To analyze these questions, a team of researchers led by the University of Minnesota’s Institute on the Environment spent four years collecting information on crop productivity from around the world. We focused on the top 10 global crops that provide the bulk of consumable food calories: Maize (corn); rice; wheat; soybeans; oil palm; sugar cane; barley; rapeseed (canola); cassava; and sorghum. Roughly 83 percent of consumable food calories come from just these 10 sources. Other than cassava and oil palm, all are important U.S. crops.

The first thing we needed to understand was how temperature and precipitation influenced crop productivity in many locations. To do this, we analyzed data from up to 20,000 counties and districts around the world to see how crop yields varied in each place with changes in precipitation and temperature.

Once we had constructed an empirical model connecting crop yield to weather variations at each location, we could use it to assess how much yields had changed from what we would have expected to see if average weather patterns had not changed. The difference between what we would have predicted, based on the counterfactual weather, and what actually occurred reflects the influence of climate change.

Our analysis showed that climate change already has affected crop yields around the world. There were variations between locations and among crops, but when all of these results were totaled, we found yields of some important global staples already were declining. For example, we estimated that climate change was reducing global rice yields by 0.3 percent and wheat yields by 0.9 percent on average each year.

In contrast, some more drought-tolerant crops have benefited from climate change. Yields of sorghum, which many people in the developing world use as a food grain, have increased by 0.7 percent in sub-Saharan Africa and 0.9 percent yearly in western, southern and southeastern Asia due to climate shifts since the 1970s. 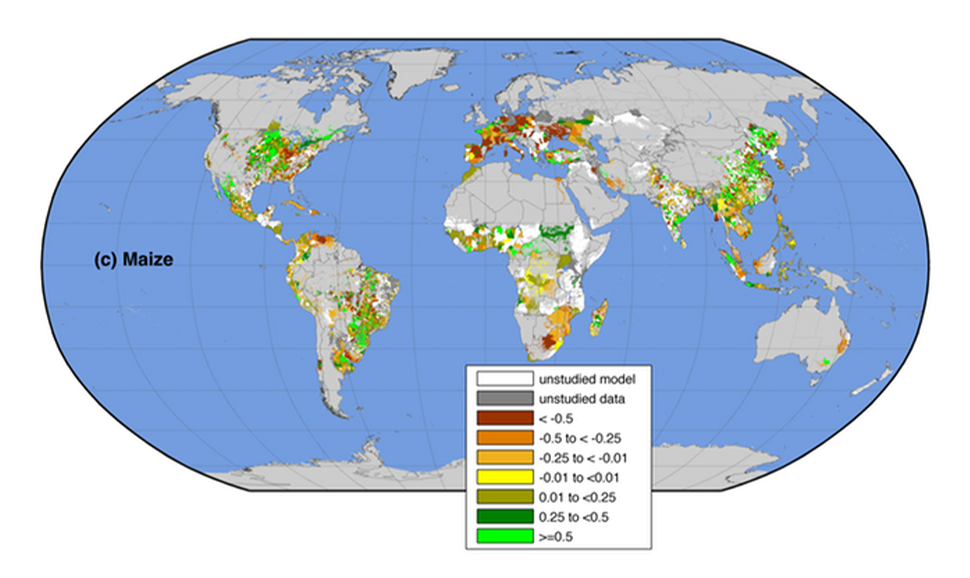 In the United States, corn and soybeans are important cash crops, with a combined value of more than $90 billion (PDF) in 2017. We found that climate change is causing a small net increase in yields of these crops — on average, about 0.1 percent and 3.7 percent respectively each year.

But these numbers reflect both gains and losses. In some Corn Belt states, such as Indiana and Illinois, climate change is shaving up to 8 percent off annual corn yields. At the same time, it has boosted annual yields in Iowa and Minnesota by about 2.8 percent. All four states have slightly warmer and wetter corn growing seasons, but Indiana and Illinois have seen larger increases in warming and smaller increases in moisture compared to Iowa and Minnesota.

Our maps track these changes down to the county level. In eastern Iowa, Illinois and Indiana, climate change has been reducing corn yields even as it boosts them to the northwest in Minnesota and North Dakota. We see similar patterns for soybean farming: Reductions are moving up from the south and east parts of the country, where slightly more warming has occurred than in states farther north. Climate change is also reducing overall yields of other important crops, such as wheat and barley. 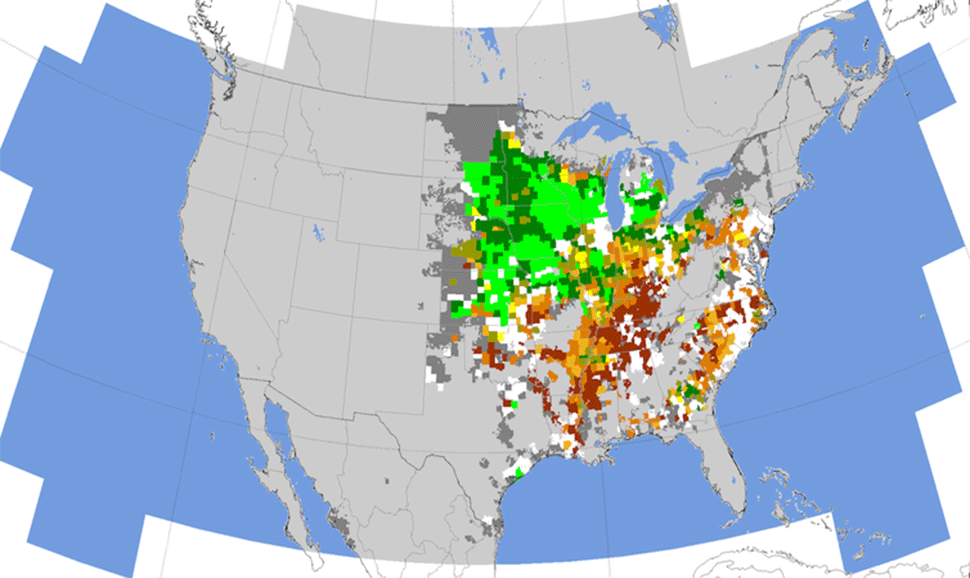 From harvests to meals

While these impacts on crop yields are notable in themselves, we had to go a step farther to understand how they could affect global food security. Humans eat food, not crop yields, so we needed to determine how climate change was affecting supplies of consumable food calories. In its most recent assessment report, the Intergovernmental Panel on Climate Change recognized that this question had not yet been answered (PDF) and was critical to building a strong case for climate change action.

Our study showed that climate change is reducing consumable food calories by around 1 percent yearly for the top 10 global crops. This may sound small, but it represents some 35 trillion calories each year. That’s enough to provide more than 50 million people with a daily diet of over 1,800 calories — the level that the United Nations Food and Agriculture Organization identifies as essential to avoid food deprivation or undernourishment.

Rich countries can work their way out of food calorie shortages by importing food. But poorer countries may need help.

What’s more, we found that decreases in consumable food calories are already occurring in roughly half of the world’s food insecure countries, which have high rates of undernourishment, child stunting and wasting, and mortality among children younger than 5 due to lack of sufficient food. For example, in India annual food calories have declined by 0.8 percent annually and in Nepal they have fallen by 2.2 percent annually.

Reductions are also occurring in southern African countries, including Malawi, Mozambique and Zimbabwe. We even found losses in some rich industrialized nations, such as Australia, France and Germany.

Rich countries can work their way out of food calorie shortages by importing food. But poorer countries may need help. Short-term strategies could include using our findings to breed or increase cultivation of crops that are resilient to or even benefit from climate change. Farming techniques and agriculture policies also can help small-scale farmers increase crop yields.

The fact that world hunger has started to rise after a decade-long decline is alarming. In the long run, wealthy and developing countries alike will have to find ways to produce food in a changing climate. I hope this will lead to a rethinking of the entire food system, from diets to food waste, and to more sustainable techniques for feeding the world.

See all by Deepak Ray