Climate change and the rise of the 'advocacy investor'

Are sustainability-focused shareholders forcing Wall Street to to take environmental issues seriously, or is it business as usual?

For some capital market watchers, the term "activist investor" may bring to mind corporate raiders such as Carl Icahn or Bill Ackman.

That's why Andrew Behar, CEO of the nonprofit As You Sow, prefers to call social and environmental activist investors something a little more aspirational: "advocacy investors."

In the absence of large-scale government regulation to force the issue of sustainability with corporate executives, some investors have taken it upon themselves to try to force companies to change. One way these shareholders are advocating change is through filing shareholder proposals or resolutions.

In a report produced by As You Sow, the Sustainable Investment Institute and Proxy Impact released in February on proxy advocacy, 433 proposals were filed in 2015 asking for more disclosure of environmental and social issues. Of the 433 proposals filed, 39 percent directly were related to the environment or sustainability — ostensibly a way to elevate the urgency of the issue at hand.

“Having a shareholder resolution is a formal escalation process,” said Behar. 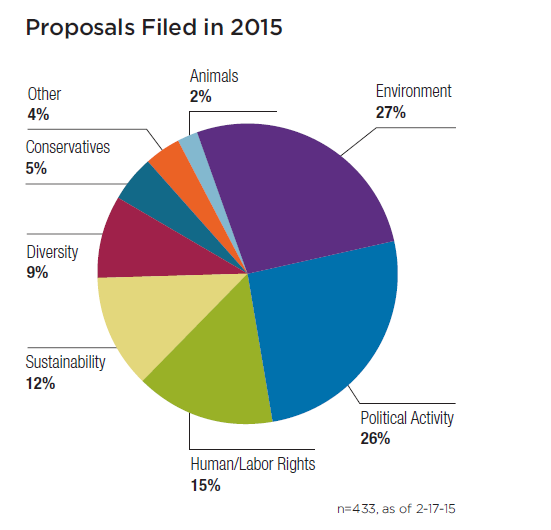 Although shareholder activism has been around for 30 years, the amount of activism has risen to unseen levels in recent years, according to the Economist. The trend has spilled over to environmental, labor and diversity issues, among other causes.

When it comes to the logistics of filing a shareholder resolution, any shareholder owning at least 1 percent, or $2,000 worth of stock, for at least a year is allowed to bring up a shareholder proposal. As long as the non-binding proposal meets a list of qualifications and gets approval from the SEC, it has to be placed on the company’s proxy statement and voted on during the next shareholder meeting.

Recently, oil giants BP and Royal Dutch Shell responded to a shareholder proposal  by the investor coalition Aiming for A, which consists of over 50 institutional investors in Europe with assets total over $251 billion.

The resolution, which is also supported by Norway’s sovereign wealth fund and consists of over $800 billion in assets, asks the oil companies for more reporting on climate change and carbon emissions.

BP said in statement filed after it endorsed the proposal, "The resolution is non-confrontational and gives us the opportunity to demonstrate our current actions and build on our existing disclosures in this area.”'

However, shortly after the negotiation The Guardian questioned the motivations between some shareholder activists and BP and Shell., suggesting that BP and Shell possibly might have reached out to shareholders prior to the final drafting of the resolution.

More broadly, companies across the energy industry that are heavily invested in fossil fuels increasingly have become a target for shareholder proposals, largely due to the potential emerging risk of fossil fuel’s stranded assets.

According to the University of Oxford’s Smith School of Enterprise and the Environment, stranded assets “are assets that have suffered from unanticipated or premature write-downs, devaluations, or conversion to liabilities and they can be caused by a variety of risk.”

The concept of stranded assets is particularly intertwined with fossil fuels because of more targeted emerging risks related to coal, oil and gas reserves that could be rendered "unburnable" in the event of stricter climate regulations.

According to report by the non-profit Carbon Tracker Initiative, up to 80 percent of carbon assets could become unburnable. That's if governments stand by their goal made at the United Nations Framework Convention on Climate Change in Copenhagen in 2009 of keeping the world’s temperature rise under 2 degrees Celsius.

“The Carbon Tracker report was a real turning point in the intellectual argument in what’s really going on here,” said Behar of As You Sow. “It’s something concrete. It’s material under the ground. And these companies have it on their balance sheet as if it's real.”

But even potentially daunting long-term risks are far from a slam dunk with corporate boards. Although shareholder proposals act as a way for shareholders to engage directors, the majority are still voted down with little fanfare.

“I think it’s a start. … We’re seeing more awareness of this," Carbon Tracker Initiative Founder and Executive Deputy Chairman Mark Campanale told GreenBiz. "We’re seeing companies announce that they are looking at the carbon bubble — and they are even using this phrase — more seriously."

However, some argue that shareholder proposals and other forms of engagements do not go far enough. Rather, they argue, the best way to get companies to listen is to divest.

“Some say it is better to hold fossil-fuel stocks and engage the companies," Ellen Dorsey, executive director of the Wallace Global Funds, said in a Wall Street Journal article last year. "This ‘wishful thinking’ strategy has been tried for 20 years without success.”

Green raiders of the corporate arc

Getting companies to disclose and report on environmental risks has proven challenging. It's been a much bigger challenge to get companies to enact concrete changes to their business model to mitigate these risks.

Last year, ExxonMobil responded to a proposal by As You Sow and Arjuna Captial — the sustainability-focused wealth management arm of Baldwin Brothers — over its risk of climate change.

While North America’s largest oil and gas company did announce for the first time that climate change is a reality, the company does not mention the potential risks of a carbon asset bubble.

“Our Outlook for Energy does not envision the ‘low carbon scenario’ advocated by some,” the report noted.

This year, sustainability focused investment advisory Arjuna Capital attempted a different approach to get ExxonMobil and Chevron to take action on their shareholder proposal.

“I took a page from the mainstream activists and corporate raiders like Carl Icahn,” said Natasha Lamb, director of equity research and shareholder engagement at Arjuna Capital. “Given the amount of money you're spending on high-cost, high carbon projects … given your demand restraints due to carbon asset risks, we think a more prudent use of capital is to return more money to shareholders through dividends and share buybacks."

So far, financial regulators are somewhat split on what to make of this logic.

In March, a proposal filed by Arjuna Capital and As You Sow, which requested more dividend allocation among ExxonMobil’s shareholders, was exempted by the SEC from the ballot at its shareholder meeting. Yet, the SEC also ruled in March that a similar shareholder proposal to Chevron could not be blocked and will be voted on in May.

According to an article in the Wall Street Journal, companies could use this contradictory ruling by the SEC to establish a precedent for blocking similar proposals.

“Having this split decision is disappointing, but we will continue forward with this campaign,” said Lamb.

Beyond the threat of a carbon asset bubble, fossil fuel companies may be looking more intently to engage with shareholders on sustainability issues because of the increasing market value and demand for renewable energy.

Thinking globally, Germany has perhaps the most ambitious plans for renewable energy. The government announced plans to source 45 percent of its energy renewable by 2030.

Although socially responsible investing long has been a linchpin of advocacy on a variety of subjects, mainstream market trackers are also scrutinizing the financial disparities between portfolios that include fossil fuels and those that don't.

According to MSCI (PDF), which provides indexes for over 6,000 pension and investment funds, investing in a market index free from fossil fuels would generate a higher return than an index that included fossil fuels. The fossil fuel free index garnered a return of 13.23 percent since 2010 whereas the fossil fuel index had a return of 11.22 percent.

“Investing in Exxon is like investing in whaling fleets in 1910,” said Behar. “I think Wall Street is wising up. I think that Wall Street’s realizing you can actually have a successful portfolio without having fossil fuels in it.”