A little indulgence over the festive season is our reward for enduring a curious and challenging year. But brace yourselves once more, for many treats we're looking forward to are already under threat from climate change.

Verisk Maplecroft's newly released Climate Change Exposure Index (CCEI) highlights that changing weather patterns over the coming decades are likely to impact the quantity — and quality — of a range of festive goods, from fine wines to perfume to Christmas nibbles.

For consumers, climate change may affect the price and availability of the goods we're buying. But for luxury products, the more significant threat is that the exclusive characteristic of a brand that makes it so desirable could be irretrievably altered.

For example, Champagne and port are so synonymous with their point of origin that near-identical goods produced outside of those regions are considered inferior. Yet even a small change in climate conditions in these regions could mean that they are no longer as well suited for growing their famous products.

Grapes for port come from the mountainous eastern reaches of the Douro Valley, among the world's oldest and most beautiful vineyard areas. But Verisk Maplecroft's research shows that the Douro Valley is among the most highly exposed areas to climate change of any wine region in Europe. And while the Champagne region in France is, overall, less exposed than the Douro, the southeast of the region is categorized as a high risk by the CCEI.

This gives luxury brands and customers a lot to ponder. Will the popularity of wines coming from the Douro or Champagne regions survive a potential dip in quality arising from a change in growing conditions? And will producers and consumers be prepared to accept versions of those products from different growing regions, perhaps new areas whose suitability has been improved by climate change? This is the gamble being taken by those Champagne houses buying up land in Kent.

Nutmeg, cinnamon and cloves are all sourced from regions likely to be affected by rising temperatures and more variable rainfall patterns.

Other Christmas favorites may pose similar questions for brands and consumers. Last year, BusinessGreen highlighted warnings that warmer winters in the Gobi desert could mean less or lower quality cashmere is produced — bad news if your sole repertoire of mother-in-law gifts comprises scarves and shawls.

Another perennially popular gift, the world's best-selling perfume, could also be under threat.

Chanel purchases between 10 and 15 tons of jasmine flowers each year, almost all of which go into making its iconic No. 5 perfume. The flowers are grown predominantly near the southern French town of Grasse, which the CCEI categorizes as being at extreme risk of climate change. Chanel may have to consider alternative sources if Grasse proves less viable for jasmine in future — or more immediately, should a planned high-speed rail line running through the region get the go-ahead — but whether these alternatives will have the same notes that have propelled No. 5 to global fame is uncertain.

Other perfume ingredients may be similarly affected: Haiti provides half the world's supply of vetiver, a grass used in a host of fragrances, yet is the second most exposed country in the world to climate change, according to the CCEI. Meanwhile, 92 percent of global vanilla production comes from countries classified as high and extreme risk in the CCEI, including Madagascar, Indonesia, Mexico and Papua New Guinea. 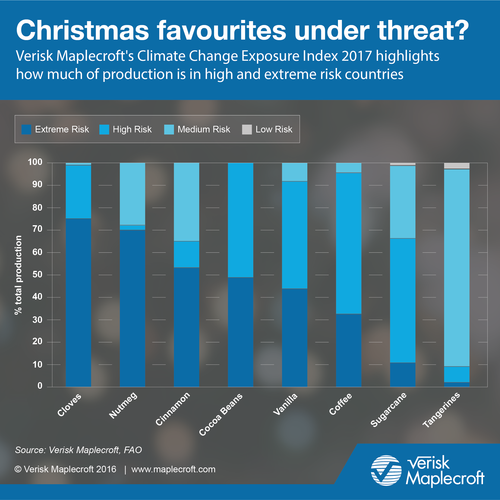 Vanilla is extremely sensitive to changes in temperature, yet projections suggest that average temperatures in Madagascar, the world's dominant vanilla producer, will rise 0.5 degrees Celsius by 2035. Meanwhile, climate change is also expected to bring more intense cyclones to the island, potentially repeating the devastation of Cyclone Hudah, which destroyed around 20 percent of Madagascar's vanilla crop in 2000 and contributed to dramatic price spikes for the commodity over the following years.

Even the most traditional Christmas gifts — gold, frankincense and myrrh — are fraught with climate risks. Gold production in both China and South Africa is facing greater water stress, while melting permafrost threatens to flood mines in Russia. Meanwhile, aromatic resins frankincense and myrrh are primarily sourced from Somalia and Yemen, respectively — both high-risk countries in the CCEI projected to experience extreme droughts in the coming decades.

But surely we can still drown our sorrows with mulled wine and a mince pie? Well, perhaps not for long. Key ingredients nutmeg, cinnamon and cloves are all sourced from regions likely to be affected by rising temperatures and more variable rainfall patterns.

In fact, 70 percent of global nutmeg production is in extreme risk countries in the CCEI, with the two largest producers — Guatemala and Indonesia — both among the 10 countries most exposed to climate change. In Indonesia, a major producer of cinnamon and cloves, mean temperatures may rise by up to 1.5 degrees C by 2050, while over the same period the proportion of rain falling in heavy events is set to double, increasing flood risk to crops.

In some instances, adaptation programs offer the potential for sourcing countries to combat the impacts of the changing climate on production. However, with at-risk commodities typically produced in countries without the resources to support such innovation, the question for brands is whether they invest in these expensive and time-consuming initiatives that are not guaranteed to succeed: If the resulting products differ in taste or quality, will their reputations alone be enough to inspire customers to continue to pay top dollar?

Climate shifts in other nations may make them more suitable producers of luxury goods. However, it remains to be seen whether Christmas party hosts will admit to serving sparkling wine from Kent, rather than Champagne.