President Barack Obama’s administration has touted energy efficiency as the cheapest, cleanest, and fastest energy source. A McKinsey report published in July concluded it "offers a vast, low-cost energy resource for the U.S. economy -- but only if the nation can craft a comprehensive and innovative approach to unlock it.”

We just completed our second year of the program and the outcomes are quite impressive.  Overall, the 2009 class of Climate Corps fellows uncovered efficiencies in lighting, computer equipment and heating and cooling systems that could:

•  Save more than $54 million in net operational costs over the lifetime of the projects
•  Cut the equivalent of 160 million kilowatt hours of energy use annually, or enough to power 14,000 homes
•  Avoid 100,000 metric tons of greenhouse gas emissions per year -- equivalent to taking more than 12,000 SUVs off the road

How did our fellows achieve such astounding outcomes?  By keeping an eye toward the low-hanging fruit: the no-cost or low-cost solutions that can provide companies with loads of savings.

Here are just a few of this summer’s stories:

•  Neelam Bhatia, a Climate Corps fellow at the technology company Advanced Micro Devices (AMD), discovered that rebate opportunities from the local utility could reduce the upfront costs and payback periods of AMD’s energy efficiency investments.  Her diligence allowed AMD to capitalize on a rebate worth more than $50,000 for cooling equipment that had been installed at AMD a week before the internship began.

•  At North Carolina Central University, Climate Corps fellows David Fox and Sahil Thaker found that rather than allowing the limited number of students who stay on campus for the summer to remain spread out in the dorms they use during the year, NC Central could consolidate them into one or two buildings. By cutting down on the number of buildings that needed to be fully lit and air conditioned throughout the summer, the University could save $74,000 each year.

•  At Cisco, Sarah Shapiro concluded that small increases in the ambient temperature of the company’s large data labs could save the company approximately $1.8 million and 18 million kWh of electricity annually, without harming laboratory equipment.

What’s even more exciting is that the Climate Corps program is actually delivering on its promise to save money and cut greenhouse gas emissions.  Last year, the inaugural class of Climate Corps fellows identified projects that could save 120 million kWh of energy.  To date, projects that account for 97 percent of that potential energy savings have either been completed or are in implementation at the 2008 host companies.

We’re now recruiting Climate Corps host companies and MBA students for next summer. To read more stories from the 2009 fellows, visit the Climate Corps website and check out the blog posts by this year's fellows. 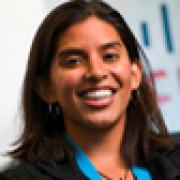 See all by Emily Reyna