More than two decades ago, government leaders, scientists, NGOs and other change makers gathered in Rio de Janeiro for a historic summit that would set the direction of sustainable development for years to come.

Since the Earth Summit, progress on climate change and sustainability has been uneven and, many will argue, disappointing. As the date of the 21st United Nations climate change conference in Paris approaches, the global community is facing another seminal year, building hopes that the December summit will mark the beginning of a new chapter with ambitious goals and more decisive action.

In our recent GlobeScan/SustainAbility Sustainability Leaders Survey we asked expert stakeholders representing business, government, NGOs and academia across 82 countries to evaluate the progress that various institutions have made since 1992 and reflect on their expectations for the next 20 years.

We were not surprised to see in the results the continuation of leadership by non-state actors, especially NGOs, who remain in a league of their own. Their contribution since the 1992 Earth Summit in Rio is ranked highest by polled experts in comparison to governments who continue to be perceived as performing poorly, for lack of substantive action. 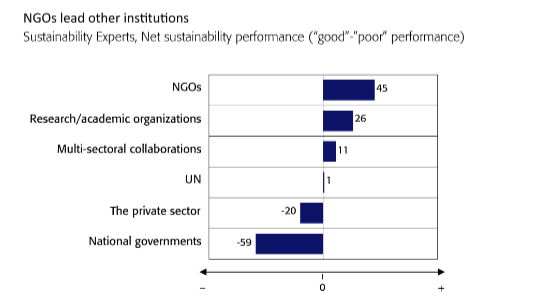 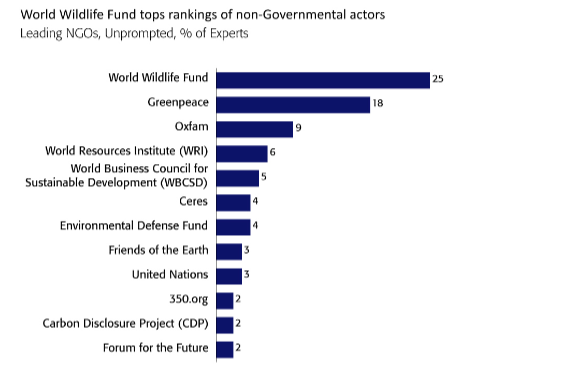 When looking at the global picture, experts across regions mainly agree on which NGOs lead on sustainability, with mostly the same organizations appearing in the top tier. WWF and Greenpeace dominate the space in all regions, with the exception of Greenpeace's receiving notably fewer mentions among North American experts. WWF enjoys the strongest reputation among European and Latin American/Caribbean respondents, while the leadership of Greenpeace is most prominent in Oceania.

Partnerships play a key role in the World Wildlife Fund's efforts to influence the course of conservation. For example, The Coca-Cola Company and WWF launched a transformational partnership in 2007 to help conserve the world’s freshwater resources. Expanding this focus and building on their progress, they have renewed their collaboration through 2020 to achieve even greater impact by helping address the natural resource challenges that impact fresh water.

While Greenpeace has faced its fair share of controversy, it is undoubtedly one of the most visible environmental organizations in the world, elevating issues to public knowledge, and influencing both the private and public sector.

Formed in 2007, 350.org is easily the youngest organization on the list, with 2 percent of expert mentions. It encourages citizens to action with the belief that publicizing the increasing levels of carbon dioxide will pressure world leaders to address climate change and to reduce levels from 400 parts per million to 350 parts per million, which is considered a safe upper limit to avoid a climate tipping point. 350.org claims alliance with hundreds of organizations around the world and effectively has leveraged social media and the grassroots movement to expand influence and impact.

There are distinct, common traits among all of these leadership organizations. Traits that our experts agree on are key leadership characteristics. In particular, experts believe that the ability to effectively engage a range of stakeholders and drive collaborative initiatives is the main quality distinguishing NGO leaders, highlighting the growing importance of partnerships in sustainable development (31 percent of experts mentioned this as a reason for NGO leadership). Leading collaboration examples cited by experts varied from business to government, to multi-sectoral partnerships.

This is closely followed by an organization’s ability to exert influence, and the effectiveness and impact of its programs (25 percent), which was the second most mentioned attribute of an NGO leader. 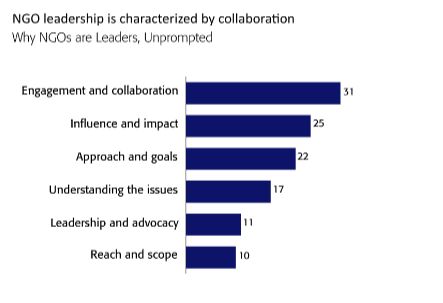 An interesting comparison is how much the overall results of institutional sustainability leadership mirror that of GlobeScan Radar’s global public opinion findings on trust in institutions. 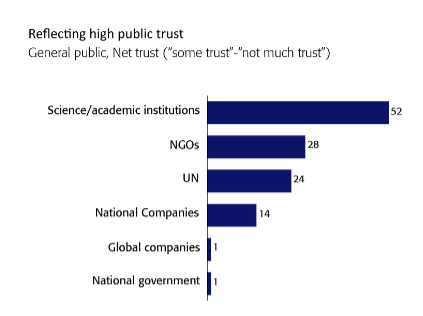 Trust is one of the most complex, strategically important assets sought by an organization. A high level of trust generates favourable responses to an organization, and creates environments where discussion, collaboration and innovation can thrive. Trust is the oxygen for healthy, resilient and value-creating organizations. Without trust, the proactive and agile decision making that organizations need turns into siloed thinking and piecemeal responses.

It is no wonder, then, that the highly trusted scientific, academic and NGO institutions are also highly regarded in sustainable development rankings.

How much do stakeholders trust corporate sustainability ratings?