Climate report reveals which companies have been naughty or nice

Sure, the Fortune 500 is a staple of the western business world. But what about the way the entire world's 500 biggest companies — the global 500 — are affecting our climate?

Thomson Reuters this week released its latest report (PDF) on the greenhouse gas emission patterns of the global 500, which reveals a mixed bag of environmental efforts and encompasses companies in diverse industries. The biggest emitters include household names concentrated in the energy and manufacturing fields.

The report is daunting in its scope, methodically reporting on hundreds of millions of tons of carbon dioxide released during the course of business operations in 2013. While some corporate players have reduced their footprints — including big names such as BP, Valero and ConocoPhillips — others have stayed relatively stagnant or even noticeably increased their CO2 output.

Profit motives, shifting regulatory frameworks and financial sustainability imperatives aside, there are also broader consumption patterns to take into account when it comes to the demand for products and services from global 500 companies.

"'Responsibility' in this context is a complex concept," the Thomson Reuters report explained. "Nearly all of us regularly use the products from the largest emitters of GHG." 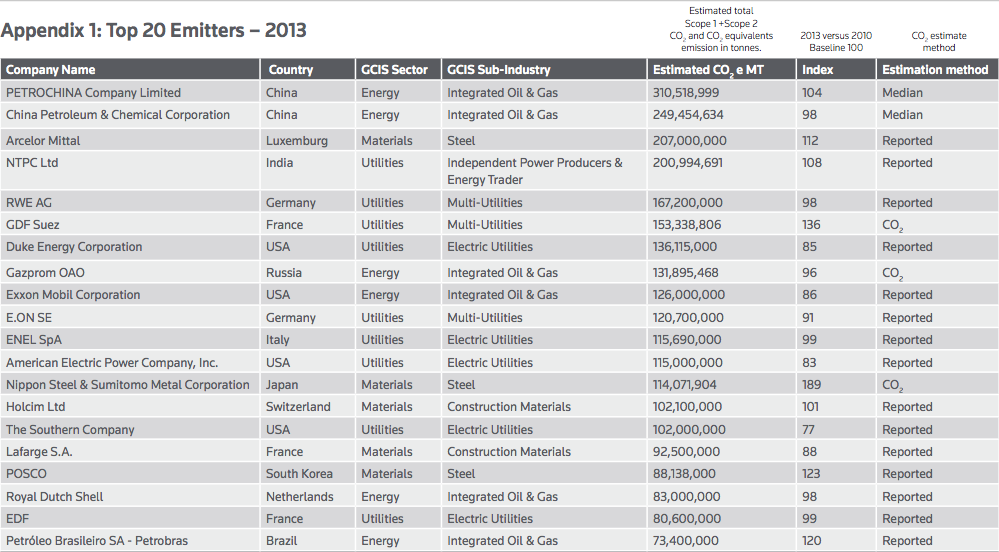 Efforts to more precisely quantify GHG emmissions have been gaining traction as a way to both gauge business costs and benefits, as well as provide a better baseline for relevant governmental regulations — a particularly hot topic with the next round of United Nations' Paris climate talks approaching next year.

The 15-year-old Greenhouse Gas Protocol, for example, is one of the most widely recognized GHG accounting initiatives and includes companies such as Sony, Intel and Office Depot.

In the new report, Thomson Reuters noted that the GHG intensity of specific industries is important to consider when evaluating ways to reduce emissions.

"For some industries with relatively large footprints, such as utilities, mining, cement production and steelmaking, GHG emissions come from running their core businesses. Efforts to reduce emissions will focus on stakeholder engagement in their operations to drive efficiency and reduction," the report noted. "Other businesses with smaller operational footprints, such as banking, telecommunications and retail, can also have profound emissions impact by requiring measurement and reductions across their value or supply chains."

That brings us to this year's nice list of companies that made noteable headway cutting down on GHG emissions between 2010 and 2013: 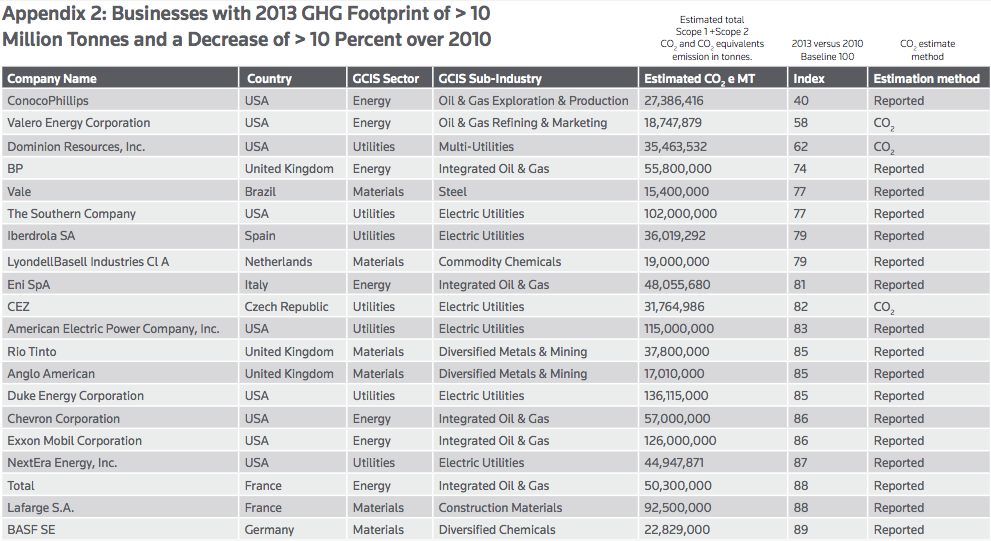 Other than sparing some of our air, what's the business upshot for cutting GHG emmissions?

One recent report suggested that more than 60 percent of Fortune 500 companies have set formal targets for reducing emissions and/or transitioning to renewable energy. In fact, 53 leading companies in this space collectively have saved some $1.1 billion annually, according to an analysis by environmental advocacy groups Ceres and WWF.

Closely related to potential cost savings associated with emissions reductions are the market upsides of cutting down GHGs. One academic study on the topic from 2012 found that average stock prices increased nearly half a percent in the days after corportate social responsibility announcements related to progress on GHG emissions.

Finally, we are left with Thomson Reuters' naughty list of global 500 companies that actually have seen a spike in GHG emissions from the most recent period on record, 2010-2013: 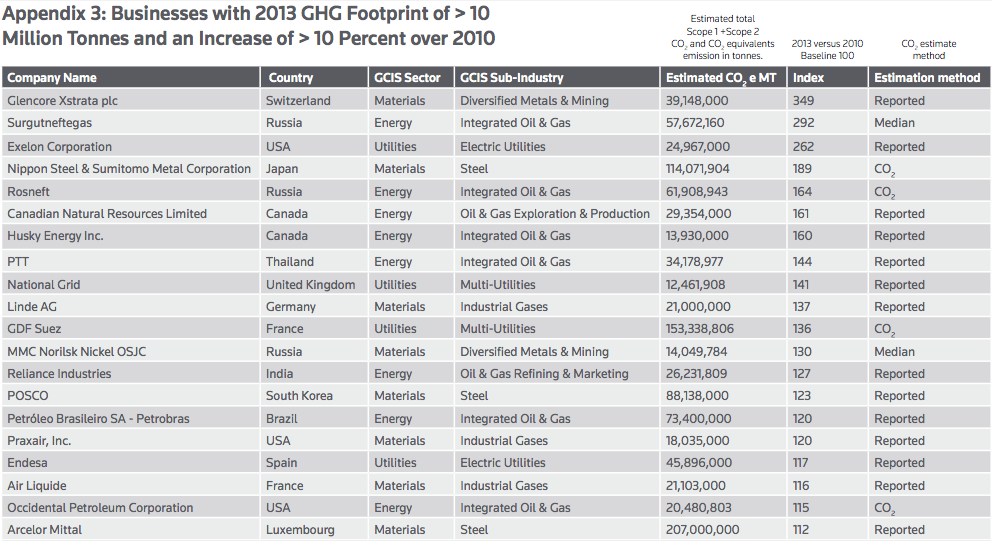 While it might seem easy to write off these huge multinational corporations as laggards in the evolving field of emissions reduction, variables such as rapid company growth, acquisitions, mergers or long-range renewable energy and decarbonization goals often contribute to fluctuating emissions.

"GHG increases or decreases are a result of a complex set of stakeholder-related variables to which individual companies are exposed," the report noted. "Evaluation of 'performance' in light of GHG reduction targets must be done in the context of individual company circumstances, while at the same time recognizing the critical corporate and collective responsibility for aggregate reduction."

The global 500's total 4.96 gigatons of CO2-equivalent emissions during 2013 — with the top 50 companies alone responsible for 79 percent of those emissions — represent significant international macroeconomic challenges to come.

The average GHG emission growth rate of 1 percent is going in the wrong direction to hit the necessary 1.4 percent average decrease needed to stay within the disconcerting prospect of a 2 degrees Celsius increase in global average temperature from 2010 to 2050.

In addition to refining GHG metrics, the report called for global 500 companies to keep their eyes on the bigger prize of this overall decrease in emissions rather than buzzwords in sustainable business strategy.

"To help reduce the impact on the climate, businesses and their stakeholders will need to focus more on the absolute tonnes of GHG and their emissions trend over time versus other benchmarks (e.g., 'carbon intensity' or carbon per amount of revenue produced)," Thomson Reuters noted. "In the end, it is total emissions which are having an impact on our present and future climate."