Should more climate scientists take their talents, skills and knowledge to the private sector?

Climate scientists are some of the most passionate people you’ll ever meet. Their dedication to studying and fighting one of the biggest global challenges of our time — climate change — is inspiring.

But they are often reluctant to deploy their research in industry, compared to the lure of faculty university and lab positions. Starting a career in industry versus one in academia has been a pressing debate today among the climate science circles. Some climate scientists have taken the leap and are moving to the industry.

Mitigating, preventing and reversing impacts of climate change is possible, and the private sector has both the capital and the will to take action. The potential market for climate solutions is well-established: A report from the Global Commission on the Economy and Climate found that climate action could deliver $26 trillion in economic benefits through 2030.

Climate scientists ought to consider joining industry and making sure that full potential is realized.

Indeed, academia is a noble pursuit. But the ivory tower has walls. Publishing papers in top journals, presenting at global conferences, searching for new funding sources, and applying to postdocs and assistant positions can be rewarding in their own ways — but is it the best possible way to leave an impact on this world?

You can assess your impact fighting against climate change in many ways: You can look at the number of citations of your paper published in Nature on climate change’s impact on wildfires, or you can see that firefighters from forest service agencies are using the frameworks or technologies you developed in the industry to mitigate the spread of wildfires.

Mitigating, preventing and reversing impacts of climate change is possible, and the private sector has both the capital and the will to take action.

There is no right answer, but it can’t be denied that the world desperately needs many more scientists working on the latter.

Patrick Brown, assistant professor in the Department of Meteorology & Climate Science at San Jose State University, actively has contributed on both fronts. His long career in academia, from researching with NASA JPL at CalTech to his current professorship, also has included spurts of startup advising and consulting.

"Academic climate science has been immensely valuable for laying the foundations for the climate action we see being implemented today," Brown said. "But the truth is, the big picture on climate change has been well-established for decades, and many climate scientists end up in academia today only to make marginal contributions."

If a climate scientist wants to maximize their impact on the real world, the private sector is the place to do that. "That's where their innovative ideas can rapidly move from the whiteboard to the real world where they can really solve problems," Brown added.

Joining the private sector is not just about deepening your impact on the world — it’s also about being able to deepen your own experiences. Climate scientists can pursue more new opportunities and multidisciplinary work in industry, where they have more intellectual freedom than the academic world.

It also should be noted that the academy and private industry are mutually exclusive endeavors. Mike Ventrice, a meteorological scientist at IBM who earned a meteorology doctoral degree at the University of Albany, mentioned that when he moved from academia to industry, he faced challenges in industry that have made him a better scientist.

"I decided to make the move from academia to industry because in industry, the information you provide on weather or climate will have direct impacts on the decision-makers or stakeholders," Ventrice said. "In industry, you are held accountable for the information you provide and this makes you strive to look at all angles of a problem. Instead of focusing on a single problem in academia, industry makes you focus on several problems and how those problems feed back to one another."

Some climate scientists have found both professional and personal reasons to establish careers in the private sector.

"One of the key reasons why I was tempted by industry is that I've been drawn towards doing something with a real-world impact which is hard to do in academia," said Stephan Rasp, a senior data scientist at ClimateAI who joined after completing a doctorate degree at the Ludwig-Maximilians-University of Munich.

"A career in academia is often very uncertain until the coveted tenure. In addition, higher salaries in the industry are an important argument for a young dad like me."

Plus, there’s a lot to learn in the private sector. Molly Morse, who finished her Stanford Ph.D. and founded biobased-plastics startup Mango Materials, said that she was able to learn new skills in industry that she never would have learned in academia.

In industry, you are held accountable for the information you provide and this makes you strive to look at all angles of a problem.

"The most valuable skill I have learned in industry that I would have never gained in academia is the ability to sell," Morse said. "Often academics can come across as too scientific, always identifying all the caveats, or highlighting what could potentially go wrong. In academia, if you are 99.9 percent sure of something, you pride yourself on identifying that 0.1 percent uncertainty in great detail. In industry, if you are 50.1 percent sure of something, you got it! This is a hard transition to make and one I am still working on."

The time to join is now

We don’t need to tell a group of climate scientists that climate change is already here and threatening "business as usual." But it bears repeating that more than 8,000 climate change-accelerated wildfires have burned through California this summer, with even more likely to spark this fall. Climate change-intensified hurricanes have left a path of destruction through the Gulf of Mexico in the past week — and the region which barely survived Hurricane Laura late last month. A "once-in-a-lifetime" derecho barreled through the Midwest and destroyed nearly 40 percent of Iowa’s corn production this summer. Not to mention, there’s the threat of infectious diseases more severe and chronic than COVID-19 in our own backyard. Plus, the number of people around the world going hungry has risen to 820 million, with climate change being the driving factor, according to the United Nations.

Luckily, climate scientists can take action in the private sector. Big companies are focusing on more sustainability roles. Both corporate investment arms and venture capital funds increasingly are investing in climate startups. (Amazon announced that it would invest $2 billion in startups building sustainable technology in June. In August, Google issued $5.75 billion in sustainability bonds, a type of finance project with environmental and social benefits. This month, IKEA pledged to spend more than $712 million on clean technologies over the next year.) Meanwhile, more climate startups are, well, starting up.

Scientists across companies and startups still publish papers and conduct research while working in industry. If you missed out on publishing in Nature, about five other high impact journals are available to publish your paper.

But if a cotton farmer misses out on planting the right seed variety in a drought-affected region of India, it becomes a matter of livelihood and in the worst cases, life or death. Mitigating and adapting to climate change before it’s too late is a beyond-urgent call. And if you want something done right, you do it yourself and decide what kind of legacy you want to leave on this climate-changing world. 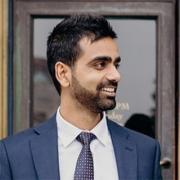 See all by Himanshu Gupta