What does the war in Syria have to do with corporations buying clean energy? More than you'd think, says U.S. Secretary of State John Kerry.

PARIS — U.S. Secretary of State John Kerry on Wednesday tied conflict in Syria and the resulting global refugee crisis to climate change, asserting that the world could continue to see similar geopolitical turmoil if underlying stressors are not addressed.

Speaking in Paris during the ongoing United Nations COP21 climate talks, Kerry cited Syria's severe drought and resulting urban migration — first domestic, then international — as root causes of a civil war that has provided a dystopian preview of what happens when climate change exacerbates existing social and political turmoil.

“Clearly that was destabilizing," Kerry said on Wednesday at the International New York Times Energy for Tomorrow conference, one of dozens of business-focused side events in Paris this week.

While the Syrian civil war is a nuanced and uniquely 21st-century conflict (more on that in a minute), the situation also belies much bigger conversations going on at COP21. Specifically, it's about how resource scarcity — more likely in a world with hotter average temperatures — can unleash simmering social, political and economic issues.

That's not an easy puzzle to solve, but it's one that is increasingly associated with the future of energy and security.

Kerry's remarks on the role of drought in the Syrian conflict follows research by the National Academy of Sciences that explicitly linked the extreme nature of the drought to climate change.

From 2009 to 2012, the historically agriculturally-rich nation situated in the "fertile crescent" region of the Middle East experienced dramatic crop failures also attributed to failed government policies for water use and agriculture.

From there, chaos ensued.

Combine food scarcity with geopolitical forces, like the Arab Spring uprisings and high unemployment, and Syria quickly became a powder keg. The country has since boiled over into civil war, spurring a global crisis over how to house more than 3 million conflict refugees and confront an escalation of terrorist activities in the region.

That volatile series of events hit the Western world head on when terrorists killed 130 people in Paris on Nov. 13. The group that has claimed responsibility for the attack, ISIS, was spawned in Iraq but has used the conflict in Syria to amass power, land, new recruits and wealth (thanks in part to a lucrative, illicit oil business). 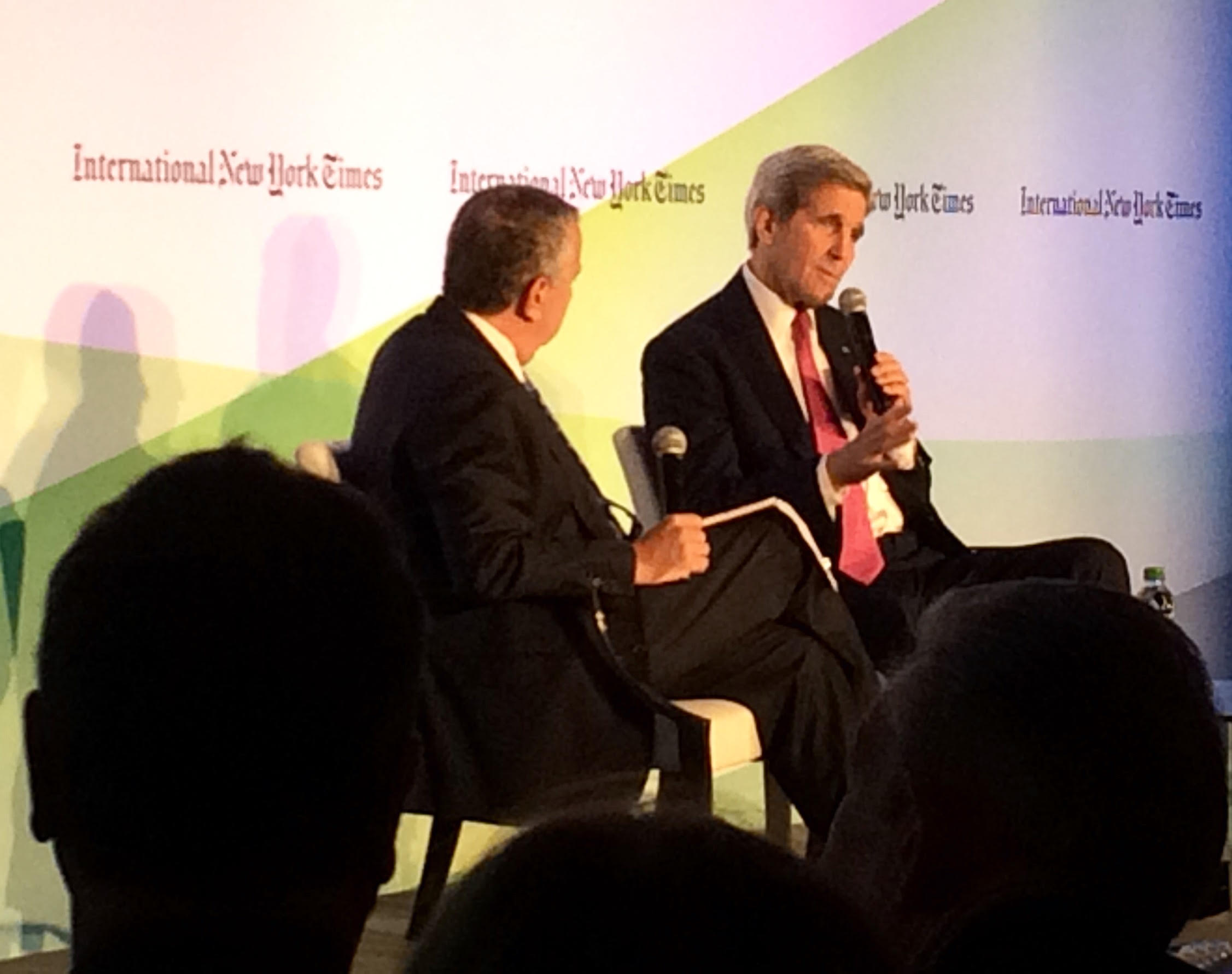 So far, the response to the Paris attacks has been swift, and concentrated on aerial bombing campaigns alongside anti-immigrant political posturing.

"You’re going to see a rise of xenophobia, nationalism — a reaction to this that has a potential to be very destabilizing politically," Kerry said. "If it got out of control … you could challenge the European project (the European Union)."

In Paris, where negotiators will be hashing out the terms of an expected global climate pact through the end of the week, signs of unease are clearly evident on the ground.

France remains in a three-month state of emergency granting increased police and military power. Local hotels have hired private security guards to screen all entrants with metal detectors, and heavily armed police and military officers are patrolling airports, public transit and the area around the Le Bourget site of the COP21 negotiations.

At the Paris forum on Wednesday, Kerry was forceful in his assessment that climate change is "not a debate. We have opportunists in politics who want a debate." Still, he acknowledged that it remains difficult to engage in meaningful policy conversations — particularly in the U.S. — when bringing environmental concerns into national security debates.

“You have to try to find the right level of concern to express," Kerry said. "If you go too far, people think you’re over the top."

In the increasingly mainstream conversation around climate resilience — or how governments, businesses and citizens can brace themselves and their property for disturbances like extreme weather or geopolitical duress — the role of energy remains a source of intense interest lacking in specific strategies.

So, how might the Paris climate talks shift that equation?

Given that the world's wealthiest countries built their economies on fossil fuels, the specter of a new global climate agreement at COP21 adds urgency to the need to transition to low-carbon power sources.

Citing increased private sector investment in renewable energy as a model to follow, Kerry framed the transition to low-carbon energy as both an economic opportunity and an opportunity to shore up national security.

"You have energy independence, and America all of a sudden becomes more secure," Kerry said. “Increasingly, I find economic policy is foreign policy."

As for the stakes of global action on climate change, Kerry again pointed to Syria as an illustration of what the world should be striving to avoid.

"It’s going to be very different from the 20th century, which was driven by state actions and state ambitions," Kerry said. "If they don’t have opportunity and their country is being stolen by some oligarch… we’re all in trouble."