Clues to our bright energy future

Clues to our bright energy future

Too often, reports from business groups and analysts gather dust on desks, or virtual dust in email inboxes. That's a lot of wisdom left untapped. The Report Report brings you highlights from recent reports that are worth a look. Share your own reports by emailing us here.

Energy has shot higher on the thermometer following last year’s Paris Agreement at COP21. Energy, most produced by burning fossil fuels, is responsible for more than one third of global greenhouse gas emissions.

While some worry there hasn’t been enough walk to back up the lofty talk out of Paris, businesses have received the message that the low-carbon economy is inevitable. Most companies see significant opportunities in accelerating the move to a low-carbon economy, including a price on carbon, according to recent research from GreenBiz and Ingersoll Rand.

Here are three of the latest reports showing some of the triumphs and challenges ahead: 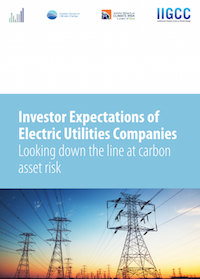 Institutional investors recognize that climate change will affect their holdings, portfolios and asset values in the short, medium and long term. Electric utilities are of particular concern due to their carbon-intensity. Thanks to the "liberalization" of many markets, electric utilities form a meaningful proportion of many indices — representing hundreds of billions of dollars in market capitalization.

But institutional investors are concerned that some companies are unprepared. Business strategy and capital allocation decisions will determine the future sustainability and profitability of the utility sector for decades to come.

Meanwhile, the Paris Agreement may lead to tightened policy for the utilities sector. These regulations include carbon reduction targets, incentives to increase renewables generation, demand-side energy savings and carbon pricing, alongside more indirect requirements for disclosure and water management. Changes in demand patterns driven by corporate direct power purchases, demographic and economic shifts and retirement of legacy assets also are also at play.

Successful utilities of tomorrow need to design new business strategies and pursue opportunities to focus on cleaner power generation, networks, customer retention and energy services. Some are trying to stave off the "utility death spiral" posed by renewables. However, there is evidence that community solar actually might help utilities transition into the low-carbon age. 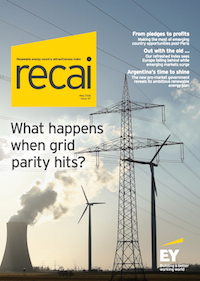 "A specter is haunting electric utilities and their regulators — the specter of consumers being able to generate their own electricity at the same or lower cost than what they are paying to purchase electricity from the grid."

As solar, wind and storage technologies continue to plummet in cost, grid parity is set to disrupt the classic utility business model. Renewable energy advocates have long warned that grid parity will transform the relationships between consumers and utilities — and the power markets in which they operate. Yet few utilities, regulators or policymakers have fully appreciated just how rapid and far-reaching this technological revolution will be. Many have avoided engaging with this impending transformation, putting it into the "too hard," "not our business" or "irrelevant" categories.

Once it becomes economical over the long term to install renewables and storage technology without subsidies, uptake will accelerate beyond the control of incumbents and the authorities, with profound implications for electricity markets around the world.

In many regions of the United States, the costs for installing solar or contracting for wind options already have reached parity with grid-based options from a utility. And with Congress having extended both the Production Tax Credit (PTC) and Investment Tax Credit (ITC), renewables likely will continue their rise to prominance.

While "grid parity" is an imprecise concept and varies from market to market, it’s becoming more and more untenable for wind and solar skeptics to claim these are just cute technologies unable to meet global demands one day. This upward trend for renewables largely is being driven by consumers who recognize the economic benefits of distributed generation. Utilities, regulators and policymakers who fail to accept this new reality will be left behind. 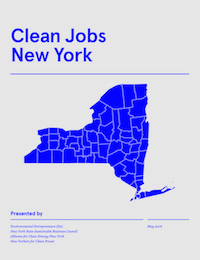 This work includes work in energy efficiency for commercial and residential facilities, as well the manufacture of Energy Star appliances and developing advanced energy-saving materials. Renewable energy generation employs more than 12,400 New Yorkers, or about 15 percent of the state’s clean energy workforce. More than 10,500 of these jobs are in solar, with the rest in wind, geothermal, advanced biofuels, as well as low-impact hydroelectric power.

Public policies such as the Regional Greenhouse Gas Initiative (RGGI), as well as the leadership of the New York State Energy Research and Development Authority (NYSERDA) and Gov. Andrew Cuomo, helped to spur clean energy’s expansion.

The U.S. solar industry employs some 209,000 people, following a third consecutive year of 20 percent-plus job gains, according to a census of workers in the clean energy sector released in January. Granted, many of these jobs don’t pay that well and mostly employ men.

New York’s high number of solar jobs is a good example of how public policies can help catalyze sustainable business. In 2012, Cuomo launched NY-Sun, a $1 billion initiative that aims to add 3 gigawatts of solar capacity to the state by 2023.

Energy efficiency also is a climate-change-fighting and business-building opportunity. To achieve the 2-degree climate goal discussed by international negotiators, the world needs to multiply energy-efficiency investments by a factor of five to eight between now and 2030 — and financial support from both government and private investors is essential.

How New York aims to raise building efficiency by 20 percent