The Coming Flood of Climate Refugees

What happens when a country's immigrant population doubles in the span of two decades? Nations scramble to prepare as flooding and water scarcity precipitated by escalating environmental catastrophes cause millions to spill across international borders. As America absorbs its share of refugees, we'll face the economic and security ramifications of a threat that we still haven't collectively acknowledged.

Concern that climate change is a serious problem fell to 35% from 44% in 2008, even as the government fails to take action on greenhouse gas emissions, but its effects are already tangible in the U.S., according to a new study from Stanford that has sparked still more controversy over global warming. When reason fails to inform public discourse, how do we begin to dislodge reactionism in favor of a proactive, solutions-based dialogue?

Director Michael Nash has discovered one way with his internationally acclaimed documentary Climate Refugees, the first film to intimately portray the human face of climate change. Drawing on interviews with experts such as Lester Brown, Nobel laureate Wangari Maathai, and politicians from Nancy Pelosi to Newt Gingrich, Climate Refugees examines the plight of an estimated 25-40 million already displaced people.

Following a Q&A with Michael, here's an introduction to the startling consequences of climate-induced mass migration:

Anna Clark: You traveled to countries from Bangladesh to China to Chad. Is there a common experience among the climate migrants in the world today? 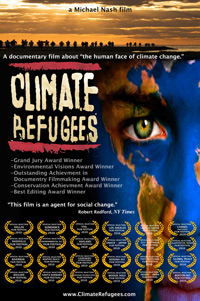 Michael Nash: There's an intersection that is taking place in civilization where overconsumption, overpopulation, and lack of resources are colliding. For the majority of climate refugees, it's all about water, either too much or too little. In Bangladesh, for example, 150 million people live at sea level. A one-meter rise could wipe out 40 percent of their land for food. Many refugees are dealing with floods and salinization of land, while others are dealing with massive droughts. All are dealing with the reality that they can no longer survive in the land where they once lived.

AC: Where will these migrants go?

MN: In history, there was always available real estate for people to move to, but there is no more available land now. In lieu of relocating to unpopulated areas, people from countries with no resources will go to countries with resources. Nation-states with permanent borders -- artifacts of the last few centuries -- may not look the same in a world that is changing so rapidly.

People won't cross borders for copper or tin, but they will for food and water. Look at Mexico and the U.S. Many of the Latinos who are coming here are migrating from Southern Mexico where there is no food to America, which has plenty. We believe that most of the climate migrants will follow this pattern and cross over into neighboring countries.

AC: What effects will climate migration have on America's economy?

MN: Hurricanes in Miami, fires in California, and floods in New Orleans are all bad, but that is nothing compared to 50 million people coming here to assimilate. People already complain that we're hemorrhaging money over 10 million Latinos, but migration on this order is a game-changer.

AC: What is preventing this from getting into the public dialogue?

MN: In America, it's politics. We did everything we could to make this an apolitical film, but this is really a political issue, that's the reality. What's happening on the deniers' side is no different than what happened in the '50s, '60s, and '70s with tobacco. There are billions and billions of dollars at stake. I think our system is broken. Both parties are more interested in their party than they are in what is good.

Also, climate change just isn't that visible yet in America. When we see a lake, or the Gulf, that's visibly polluted, we get that. We still don't get this.

AC: What has been the international policy response to climate migration?

MN: Right now, there is no law that gives asylum to climate refugees. In Myanmar, which was wiped out by a cyclone, we tracked these people into other countries in refugee camps. They are not on the docket as climate refugees even though that's what they are. Then there is Darfur. The shepherds from the north and the farmers from the south are fighting over the last arable land. By 2025, 66% of Africa's arable land will disappear. This is a tsunami that has rolled up on our shore and we're not ready for it. The situation demands international policy that allows litigation on environmental and climate refugees.

AC: What should America be doing about this? 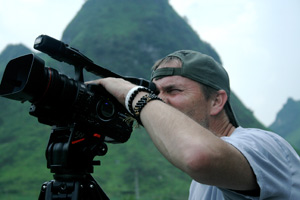 MN: When I was in Copenhagen, I asked the Chinese what they thought of the whole issue of America going green. They observed that we're in political gridlock, and that suits them just fine. Make no mistake about it. Nothing will make China happier than if we spent the next 100 years lagging because they plan to blow right past us. America needs to sign a green-energy bill for us as much as the rest of the world. Green jobs are the way for America to get out of this situation that we're in right now. Much like we built a highway, we should do the same thing for smart grid so a farmer can generate income for himself not only from wheat but also by generating his own solar and wind energy. There are countries that are already doing it.

Problem is, we seem to prefer crisis management. Take Tuvalu, for example, one of 42 nations at risk of being underwater in the near future. Should we just give them the money to build a sea wall that might keep them there a little longer or should we just move people? We need to adapt and have mitigation tools in place. To do that, we have to recognize the problem and start mobilizing around solutions. Being politically active is key.

The second thing is to start going green. We are 4 percent of the population and use 25 percent of the resources. A lawyer could argue that America has persecuted Bangladesh because of the way we have lived. We don't understand when we buy an SUV that we are actually impacting the life of someone across the world. The U.S. is clearly behind in this movement. We can't afford not to catch up.

AC: What has the response been to the film so far?

MN: Climate Refugees was world premiered at the Sundance Film Festival in January of 2010. It has received accolades from senators like Barbara Boxer and various awards. We were invited to host a screening to policy-makers and world leaders in Copenhagen. Since that time, without really even soliciting, we've had 300-500 colleges around the world screen this, as well as embassies, local governments, and the State Department.

AC: Is there anything you are hopeful about?

MN: We're now focusing on a tour of high schools and universities. We also have a lot of faith-based organizations that want to screen this film to their congregations. When we ask young audiences what they hope their grandchildren will say when they look back at us 50 years from now, most were very hopeful. Human beings are smart. We have the technology to fix this. Other countries are doing it. There is no reason why America can't do it. We need more green ambassadors to help.

Nash offers valuable insights for ecopreneurs working to make a difference. Here's what we can glean from him on:

Starting in your own backyard. In 2005, three months after two hurricanes (including Katrina) slammed into Hutchison, FL, I went home for Christmas and it was still devastated. I saw firsthand how two storms in a 14-day period did things I had never seen happen before. Then I read an article out of the U.N. in Tokyo that said there were more climate refugees in the world than political or human rights refugees. I recognized that this was an under-researched platform. My journey of investigative journalism turned into an award-winning documentary.

Film. That's the business I'm in, so I understand film. It also happens to be a wonderful medium that anyone can use. It's a vital template for communications today.

Experience. If you have a past, it helps. This was not my first film.

Social entrepreneurship. Anybody who pushes this movement forward is not only doing a solid thing for civilization, but will benefit from an expanding marketplace. The demand for green products is growing everyday.

Vision-casting. There are a lot of people out there with a lot of money. They're looking for good things to do with it. If you have the idea, do your homework, package your ideas together, and present it with passion. You'll find help everywhere you look.

The power of one. When you start to change the way the world looks at something, it's huge. This project has already begun to do that. I've cris-crossed the world meeting good people doing like-minded things. These people have a mad passion to make the world a better place. I was recently invited by the Skoll Foundation and Sundance Film Institute to speak to social entrepreneurs. I met a guy who puts solar units on huts to prevent people from burning wood. He discovered that when kids got educated, they would leave the village to find work. When a grandmother approached him for work, he realized that solar installation was a way for grandmothers to earn money. Now many grandmothers have green jobs because of one person was willing to create the platform. Anyone who can find a way to execute a good idea can change the world.

Anna Clark is the author of "Green, American Style" and the president of EarthPeople. She blogs on Eco-Leadership for GreenBiz.com.

The reality behind the Climate Reality Project

See all by Anna Clark