Companies blind to risks of water pollution and scarcity, and the untapped opportunity to address it

With the private sector withdrawing and polluting more water than ever, bigger and bolder action is needed.

For those of us privileged enough to be accustomed to finding our supermarkets fully stocked, COVID-19 has been eye-opening. We’re seeing runs on cleaning supplies and dry goods, and a national meat shortage could be on the way. The pandemic gives us a taste for what climate change and rising water insecurity could bring in the future — at a much greater scale.

In its annual disclosure to CDP, Coca-Cola recently said "water scarcity [could] disrupt sourcing and/or production" of its iconic soda, while water shortages pose a real threat to Nestlé’s and Kraft Heinz’s agricultural supply chains.

Our entire global economy is vulnerable to the increasing incidents of floods, droughts and pollution, among other water-related risks. Building a water-secure future will require an unprecedented response from the private sector.

The world is running out of clean fresh water. We face a 56 percent shortfall of the available  global water supply  by 2030, according to WRI, a figure previously estimated at 40 percent.  This is driven by both rising demand and falling supply because of climate change impacts such as increased drought.

Water stress in certain U.S. regions is on par with that of the Middle East and North Africa. Look to one of our driest regions, Arizona, for a critical example: In June 2018, the Arizona Department of Water Resources warned that under current water allocation rules, an extended drought could cause central Arizona to lose its entire Colorado River supply in the next five years.

Almost half of the water consumed by Arizona’s agricultural sector is supplied by the Colorado River, alongside 40 percent of all industrial and municipal water use. Without this water source, Arizona’s GDP could drop by over $185 billion and put more than 2 million jobs at risk.

Large industrial companies are significant contributors to the problem and have ethical, financial and legal obligations to responsibly  manage water.

Meanwhile, The World Bank warns of an "invisible" crisis of water pollution profoundly affecting societies and economies. Worldwide, 80 percent of municipal and industrial wastewater is returned untreated, and in the United States, 50 percent of rivers are polluted.

As the economy grows, we pollute more. The U.S. alone receives manufacturing notices for more than 1,000 new chemicals each year. The Clean Water Act is meant to regulate the discharge of these chemicals into the nation's lakes, rivers, streams, wetlands and coastal areas. But the Trump administration has been loosening pollution regulations over the past 3.5 years.

There have been some wins, such as a recent Supreme Court ruling that prohibits corporations in Hawaii and elsewhere from releasing dirty, chemical-infested water into nearby waterways — even on an indirect route. But the U.S. is far behind regions such as Europe when it comes to regulating pollution.

Companies must step up of their own volition. They must support environmental policy that protects water and address water issues within their own operations. With the private sector withdrawing and polluting more water than ever, bigger and bolder action is needed to protect water sources. A key challenge to addressing the water crisis is the concerning reality that companies may be blind to the  business  risks posed by water scarcity and pollution.

Large industrial companies are significant contributors to the problem and have ethical, financial and legal obligations to responsibly  manage water.  CDP’s global water report, "Cleaning Up Their Act: Are companies responding to the risks and opportunities posed by water pollution?" recently was released, and includes stark findings reported by companies themselves:

The good news is: Some companies are stepping up to meet this crisis.

The number of companies on CDP’s Water A List more than doubled between 2018 and 2019, from 31 to 72 companies. This means more companies than ever are placing water considerations at the  center  of their governance and growth strategies. The majority of A Listers come from Asia (26 companies) and Europe (24 companies), with North America in third place (14 companies).  But this is a relatively small group in the vanguard; we need to see this level of ambition become mainstream across the business community. Companies report a range of actions related to pollution management, most of which could be categorized as "business as usual."

For example, 57 percent of disclosing companies are monitoring the wastewater they discharge in some form across the majority of their facilities. Are these actions important? Absolutely. Are they transformational? Not yet.

Meanwhile, there are  opportunities  for companies  to realize competitive advantage if they manage water risk and pollution. U.S. companies identify $340 billion in water-related business opportunities if they take urgent measures to protect water bodies.

These opportunities include new revenue streams (for example, Irish dairy manufacturer Carbery Milk Products produces ethanol from its wastewater and uses it to create beer) and increased access to capital and profits. Investors want to see that the companies they invest in are managing water risks. And consumer demand for non-toxic products is growing.

Companies must double down to reduce their negative impact on water. As governments move to ensure the needs of their citizens and natural environments are met, businesses are learning to do more with less. To become resilient in the face of growing water scarcity, companies must:

Action needs to happen at all levels of society and the economy — from national and local governments, to central banks, investors and companies, to individuals — we must all play our part to protect our precious waterbodies. 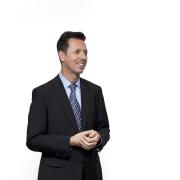 My defining moment? Earning a permanent seat at the table

See all by Bruno Sarda