It's never been easier to get caught red-handed

Some companies are learning the hard way that sustainability is increasingly critical to the corporate bottom line — and that advanced technologies are making unsustainable and illegal practices easier to detect.

Just a week later, a coalition of over 60 organizations called for the removal of United Cacao from the London Stock Exchange Alternative Investment Market (AIM) for destroying forests and violating indigenous rights in Peru’s far-flung Amazon rainforests. It was revealed the two companies are actually connected and funding from United Cacao on AIM goes towards Plantaciones de Pucallpa’s operations.

A picture of deforestation is worth a thousand words.

Once upon a time these deforestation activities might have gone unnoticed, but with new forest monitoring systems such as Global Forest Watch, which take advantage of high resolution satellite imagery to detect changes in forests in near-real-time, anyone can see within as little as two weeks where trees have disappeared.

This information gives journalists, certification bodies, governments and non-governmental organizations hard evidence of unsustainable and potentially illegal practices. It also creates new opportunities to hold those responsible accountable for their negative social and environmental impacts. If companies are forced to face real reputational and financial consequences for deforestation, will we begin to see a change in business as usual?

To maintain its RSPO certification and membership, Plantaciones de Pucallpa is prohibited from clearing primary forests, but data on Global Forest Watch clearly show Intact Forest Landscapes (a close proxy for primary forest) stood on the land in question in 2000, and were cleared between 2011 and 2013.

Quick and easy analysis shows nearly 5,832 acres of the Intact Forest is gone, a conservative estimate that doesn’t include the other 9,674 acres of tree cover lost outside the intact area, bringing the total tree cover loss to about 15,506 acres — an area about the size of the island of Manhattan.

<p>How much Tree Cover Loss occurred in this plantation?</p>

A previous article detailed the similar case of United Cacao, which cleared over 4,942 acres of pristine tropical rainforest in the Peruvian Amazon — releasing 660,000 tons of carbon dioxide in the process — while claiming to be a sustainable operation.

In its Admission Document (PDF) to AIM, United Cacao claimed that not only did they not remove any timber from the project site, but there was no high conservation value forest there to begin with — a statement contradicted by satellite evidence. 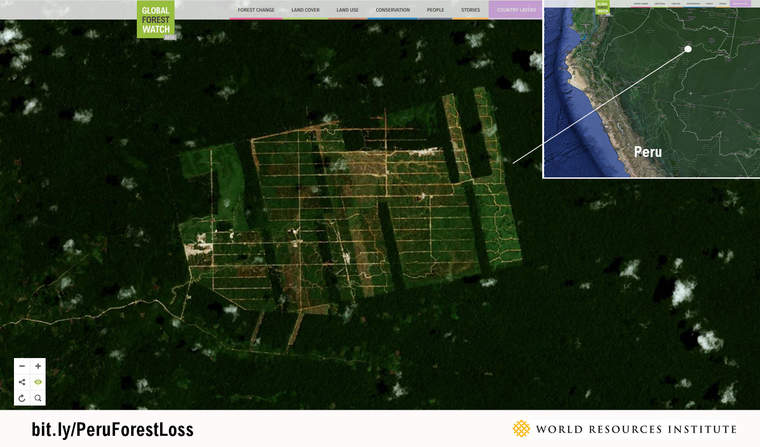 In light of these investigations, the Peruvian government ordered Plantaciones de Pucallpa and United Cacao to cease operations. That might have been the end of the story in terms of media attention, but in fact, the companies continued to clear forests after they were ordered to stop and did not publicly admit they still stood accused in Peruvian courts.

Powerful data like the weekly GLAD (Global Land Analysis and Discovery) alerts showed large patches of tree cover loss since 2015, which the media used to confirm that the companies were continuing to violate government orders.

<p>High resolution imagery from Urthecast and recent GLAD Alerts show tree cover loss on United Cacao and Plantaciones de Pucallpa land in the months since they were ordered to stop operations and brought to trial.</p>

Unfortunately, knowledge of a problem is not always enough to fix it, especially when it comes to the corruption and vested interests that often underlie deforestation. "Legality" is a murky area, as legal frameworks governing forest management often contain loopholes and inconsistencies. In countries and sectors where deforestation is highly profitable, generating revenues for companies and governments alike, political will to address deforestation is often absent.

United Cacao, for example, has denied allegations and continues its operations, even demonstrating that the local government is offering them to apply for more land — pointing to a disconnect between national policies and local resource governance. Plantaciones de Pucallpa did much the same, claiming the RSPO’s allegations were completely unfounded, despite satellite evidence.

As we enter into a new era of radical transparency for forests, there are signs that the gap between transparency and accountability might be closing:

Unprecedented access to satellite imagery and data means those who destroy forests for profit can't hide their activities for long. Governments and markets can work together to make winners of those who protect forests and losers of those who destroy them. Companies that are taking their sustainability commitments seriously will be more likely to find themselves on the winning side.

Tech tells you how much rainforest is in that chocolate bar