The compelling case for creating a nation of microgrids

We so take the electricity infrastructure for granted that we fail to recognize it as a potent public policy tool for economic revitalization. Of all large infrastructures in the United States, nothing is more poised for transformative change, with a host of long- and short-term benefits, as today’s electricity delivery system — not roads, not information technology, not oil, coal and natural gas, not entertainment, not retail, not housing construction, not healthcare.

The new electricity opportunities parallel the Internet in scope and transcend traditional industry boundaries, something that should concern every person or business who consumes power. The co-inventor of Ethernet, Bob Metcalfe, coined the term Enernet to describe this emerging infrastructure.

Promises of infrastructure spending to "jumpstart the lethargic U.S. economy" mean little unless we specify where the investments are targeted. Otherwise, the Trump administration's infrastructure plan will end up short.

Consider a scenario in which the layout of today’s electricity grid is transformed into a cluster of interworking microgrids. This investment could cost an estimated $1 trillion over 10 years if you consider a scenario in which roughly 500 gigawatts of the U.S. generating capacity (roughly half of the total) is transformed into solar panels, batteries, inverters and related technologies at $2 per watt installed.

Should the United States not demonstrate leadership on transforming electric grids, other nations will — for little technological advance holds back the needed transformation.

Much of this spending could come from the private sector and, in theory, could create about 1 million well-paying domestic jobs. It also could increase the annual GDP growth rate by up to 0.5 percent.

The main point is economic revival

There are many arguments in favor of such investments. For one, today's electricity grid is unwieldy and vulnerable to cyber attacks. Had the grid consisted of a cluster of microgrids, for example, the alleged Russian attack on the Vermont electricity grid Dec. 31, or similar future attacks, would matter little. The attacks might cause limited harm but they wouldn't threaten the overall integrity of the nation’s electricity system.

Beyond security, the pursuit of a cluster of microgrids could yield new products and services. That innovation could act as a growth engine across a diverse swath of industries — especially construction, IT, telecommunications, the automotive sector, electronic appliances, batteries and other forms of energy storage, to mention only a few. There would be a surge in entrepreneurship. Existing companies not traditionally in electricity generation, distribution or services would enter the business.

Naturally, the new electricity also would be cleaner and cheaper. Economic revival is the main point, however. That future generations will inherit a more habitable planet, through emissions-light electricity, would be an incidental outcome of bold public policy.

Given this prospect, the Trump administration should foster policies to deploy a federation of inter-working microgrids that, when necessary, also could work as standalone systems. Incumbent utilities should be able to participate in this transformation alongside newcomers, entrepreneurs and other businesses.

A new menu of electricity services

Inexplicably, electricity today, in my view, remains the sole undifferentiated, under-packaged, un-marketed, un-branded commodity product — it is time we had a plethora of electricity options.

The right ingredients are emerging, but it will take time to get the recipe right. The electricity industry today is full of vested interests entrenched into a comprehensive, largely reliable system with a 100-year history. In effect, it has operated much like an exclusive club with its own fancy restaurant. The table is set, the agenda defined, the menu card is before us. As a diner, you can order steak but not Chinese, Indian or Italian food. (After all, this is a steakhouse, not a sandwich stand!) In truth, technological advances are changing what could be on the menu dramatically — the sit-down restaurant is transforming into a vibrant food court.

Right now, many status quo advocates present this evolution as a platter of obfuscating jargon ("smart grid," "automated metering infrastructure") thrown onto the plate with seemingly well-intentioned goals that in fact should be taken for granted for any electricity solution such as reliability, resilience, affordability and quality customer service. The incumbents routinely sprinkle legal principles such as public service obligations, stranded costs, franchise rights into the mix — most of which are obsolete or irrelevant in the face of technical advances.

Barriers to entry have fallen

This melange of established relationships and predictable behaviors is being remixed by solar, battery and wind technologies — and now blockchain for electricity trading — with attributes unlike anything encountered by the hoary power industry.

Distributed generation, the rise of customers as informed prosumers, edge and centralized energy storage — these developments promise to upend electric utilities globally. We are in the midst of what the economist Joseph Schumpeter called "gale forces" of "creative destruction" — and creative construction, too.

Should the United States not demonstrate leadership on transforming electric grids, other nations will — for little technological advance holds back the needed transformation. Rather, organizational restructuring aided by foresightful public policy is the key.

The new reality is this: Barriers to entry in electricity have fallen; in theory, at least, anyone can be in the electricity business.

The old arguments in favor of "natural monopoly" are dead. Economies of scale matter little, and the price of electricity no longer depends on the ability to produce power at scale. In fact, we do not yet know how small a standalone electricity system can be — at the level of a home, neighborhood, shopping mall, campus? Very likely, the facilities management departments of hospitals, buildings, or schools might run standalone electricity systems — for all practical purposes, no grid necessary.

That future generations will inherit a more habitable planet, through emissions-light electricity, would be an incidental outcome of bold public policy.

Until recently, we have had few scenarios in which electricity infrastructure could be considered as a lever for national policy objectives. But now, the industry presents options for national growth and security objectives. Groundswell forces will create the microgrids I am talking about sooner rather than later. Merit lies in hastening the transformation through active public policy.

The timing could not be better — the U.S. economy has been reeling for more than a decade; there is structural unemployment; people have suboptimal jobs; the young feel demoralized; cynicism abounds; the future appears bleak. Backward glances predominate, not anticipation of the future.

Given the convergence of those sentiments, a focus on policy to support investments in Electricity Infrastructure 2.0 should be a priority for the next 20 years, and no country is better positioned to lead this metamorphosis than the United States. 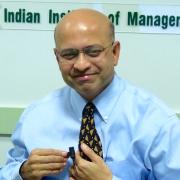 Author
The Microgrid Revolution: Business Strategies for Next Generation Electricity

Diving into the solar microgrid revolution

See all by Mahesh Bhave