Compelling new data on why we shouldn't waste wastewater

Today marks the annual celebration of one of the world’s most precious, and most wasted, resources. The theme for World Water Day 2017 is wastewater, and the urgent need to reduce and reuse it.

Wastewater is any water that has been used in the home, in a business or as part of an industrial process that is returned to the natural environment — and the world’s mismanagement of wastewater is putting the health of humans and the environment at risk.

Currently, over 80 percent wastewater flows back into the environment untreated. This has severe, cascading effects. For example, it exacerbates the rates of water-related diseases, and the World Health Organization reports that every 90 seconds a child dies from such diseases. It can cripple marine and freshwater life, creating poisoned, unproductive areas called "dead zones" that plague the ocean. One of these "dead zones" that forms annually in the Gulf of Mexico can be as big as the state of Connecticut; a result of excess nutrient loading influenced by poorly treated wastewater in the Mississippi River basin.

Much work needs to be done to halt and reverse the impact of wastewater. So much so, the issue was included in the U.N.'s Sustainable Development Goals, with a target of substantially increasing water recycling and safe reuse by 2030. Focusing on corporate and municipal reuse of water will be vital to achieving this goal, and protecting companies and cities from the significant water risks they face.

In 2016, over a quarter of companies reporting to CDP’s Water Program experienced water-related detrimental impacts, and 74 of the 111 U.S. cities reporting to CDP reported substantive risks to their water supplies. In fact, CDP data shows that companies expect over half of the 4,416 water risks they identified — such as drought, declining water quality and regulatory and reputational risks — to materialize within the next six years.

Companies and communities can and should consider wastewater reuse as a meaningful mitigation strategy, both as a means of reducing their environmental impact and safeguarding water resources for citizens.

Reusing water to your advantage

With any risk mitigation strategy, however, companies must consider both pros and cons as they explore ways to make wastewater work for them. CDP’s latest report, "When wastewater isn’t wasted," offers compelling evidence as to the benefits and trade-offs leading companies are considering.

For example, when water risks are imminent or already impacting a business, reuse may be necessary to ensure business continuity, a clear benefit. For example, Colgate-Palmolive reports investing in numerous water recycling technologies, including reverse osmosis, to treat and reuse water for utilities in its manufacturing sites in Brazil. These investments ensured continued operation during the recent water crisis in São Paulo.

Companies and communities can and should consider wastewater reuse as a meaningful mitigation strategy to reduce their environmental impact and safeguarding water resources for citizens.

However, trade-offs must also be considered. While in some cases water reuse projects can increase emissions, technology improvements can help to address this trade-off.

Water technology company Xylem reports an example of a wastewater treatment plant in Liberty, New York, which upgraded its oxidation systems with new Xylem technologies. Previously, each oxidation system required 100 horsepower. Using the new system, the plant was able to reduce the required energy load to 57 horsepower. This has led to a saving of more than $36,000 per year at the plant, according to Xylem's data.

It's clear that water recycling can bring a variety of benefits and tradeoffs, not only to a company’s environmental strategy but to its overall operations and growth plans.

All in it together

Many projects can be implemented within a company’s direct operations to reuse wastewater. However, some of the largest opportunities might emerge through collaborations between companies and cities. Indeed, there is a strong need to support cities around the world on water issues. From the 533 cities reporting to CDP in 2016, 61 percent foresee a risk to their water supply and are seeking to counteract that through investments in existing infrastructure, storm water management, watershed preservation and diversifying their water supply.

Collaboration is already in full practice as shown by General Motors’ Detroit-Hamtramck Assembly plant, home of the Chevrolet Volt.

The facility has installed a water retention pond to reduce the excess water it was sending to the city of Detroit. The facility houses three retention ponds that collectively hold 47 million gallons of water and save GM nearly $2 million annually. Rain collects in the ponds, which is then used in plant cooling towers — cutting water use by 20 percent. The remaining water is purified and converted to steam, which is then used to heat and cool the assembly plant, as well as 145 other Detroit businesses.

When companies work with stakeholders on local water projects, they increase the security of their own water supply alongside everyone else’s.

Water is a shared resource, so we must advance sustainable use and management across all water users including corporations, government entities, NGOs, and local communities.

When companies work with stakeholders in the surrounding area on local water projects, they increase the security of their own water supply alongside everyone else’s.

These examples of corporate collaboration with surrounding cities represent a critical next level in achieving water security. On 2017’s World Water Day, I encourage you to consider not only how your company can reuse wastewater within your own operations, but also how this can extend beyond the corporate fence line and have a larger benefit for the water security of your communities. 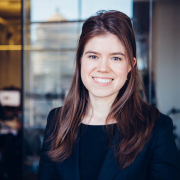 See all by Christina Copeland