<p>The EPA announced it will redesign its label for new cars to make it easier for consumers to buy the cleanest, most fuel efficient models. But in a recent poll, the two label designs proposed by the EPA confused consumers, who cared more about gas mileage and fuel costs than the new environmental information the EPA now wants to include.</p>

The U.S. Environmental Protection Agency announced last month it will redesign its existing label (pictured left) for new cars to make it easier for consumers to buy the cleanest, most fuel efficient models.

But in a recent poll, the two label designs proposed by the EPA confused consumers, who cared more about gas mileage and fuel costs than the new environmental information the EPA now wants to include.

The findings also suggest that one of the designs featuring a letter grade that is based on fuel economy and greenhouse gas emissions may not have the impact the EPA had hoped for, since 38 percent of respondents said they would buy a car graded less than a "C."

Overall, 66 percent of those in the survey rejected the vertical label (pictured right) that emphasizes the letter grade. They instead preferred the horizontal version (pictured below), which emphasized miles per gallon (mpg) and offered more context for each data point, as well as an emphasis on annual operational costs, rather than savings.

"By giving so much space on the label to the letter grade, other data were presented with little or no context and crammed into the lower third of the label, causing confusion," Alan Siegel, founder and chairman of Siegel+Gale, the firm that conducted the survey, said in a statement this week.

"Our survey demonstrates that Americans want clarity and usefulness in communications from government agencies. The redesign of the fuel economy label is a major initiative that will touch countless Americans. Now is the time for the federal government to show its commitment to making clear communications a national priority."

Siegel+Gale recommended that the EPA abandon the vertical label and letter grade, and give consumers information on the mpg and cost of ownership. 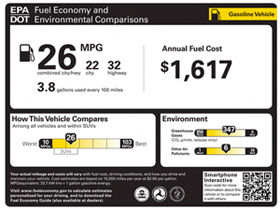 "If the EPA takes these steps, it may be successful in increasing the number of fuel-efficient vehicles on the road and communicating clearly with consumers," Siegel said.

The survey also broke down the numbers by political affiliation, finding that a quarter of Democrats consider the environment to be a major consideration when buying a car, compared to 12 percent of Republicans and 17 percent in Independents.

The proposed labels also angered some in the survey: "This info is irrelevant to me," said one respondent. "I know what car I will buy and this is just another way for the government to get in our face."