Cooking the books to spoil the Clean Power Plan

Cooking the books to spoil the Clean Power Plan

The Trump administration released its proposal this week to repeal the Clean Power Plan, which set the first limits on carbon pollution from power plants — one of our country’s largest sources of the pollution driving climate change. Scott Pruitt’s political team at the Environmental Protection Agency (EPA) cooks the books to inflate the costs of the rule and hide its climate and public health benefits. Pruitt’s efforts look especially ridiculous in light of the strong progress (PDF) the power sector has made in recent years.

Recent data underscore that the Clean Power Plan is readily achievable at even lower cost than EPA estimated when it issued the rule in 2015.

Carbon emissions from power plants dropped again last year and fell to their lowest levels since 1988, according to recent data (PDF) from the Energy Information Administration (EIA). The rapid emissions decline over the past decade has been driven by rapid renewables growth; flat electricity demand due in large part to increased investments in energy efficiency; strengthened public health protections; and low natural gas prices. EIA data also show (PDF) that renewables such as wind and solar have reached 7 percent of the generation mix — growing more than sixfold in the past decade.

E2 found that repealing the Clean Power Plan would deny Americans the opportunity to create 560,000 jobs and add $52 billion in economic value.

The Clean Power Plan reinforces and builds on these market trends by embracing the kind of flexible strategies that the industry already employs. (David Doniger addresses the solid legal footing of this system-wide approach here and here.) In 2016, emissions fell to (PDF) 25 percent below 2005 levels, and the power sector is already within striking distance of the 2030 Clean Power Plan goals.

The CPP gradually would phase in the emissions limits between 2022 and 2030, and was projected to result in emissions cuts of roughly 32 percent below 2005 levels by 2030, which translates to 19 percent below 2012 levels. Since 2012, power sector carbon emissions already have fallen more than 10 percent. In other words, the power sector already has achieved more than 55 percent of the cuts required by 2030 in just the past four years. 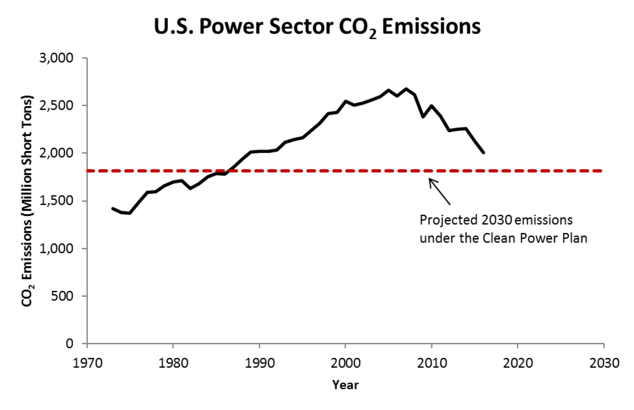 Study after study, including those that EPA points to in the Regulatory Impact Analysis (PDF) for today's repeal, has shown that the remaining cuts to meet the Clean Power Plan’s 2030 goals can be achieved at low cost while maintaining a diverse electricity supply mix. The rapid growth of renewable energy is projected to continue, thanks in part to the extension of the renewable energy tax credits in December 2015.

A June 2016 report released by MJ Bradley & Associates (MJB&A) found that the required Clean Power Plan pollution reductions would be achievable at low cost across a wide range of scenarios. Various independent studies arrive at the same conclusion. The renewable energy tax credit extensions and forecasted low natural gas prices, among other factors, will make the CPP targets even easier to meet than originally expected when the rule was finalized. 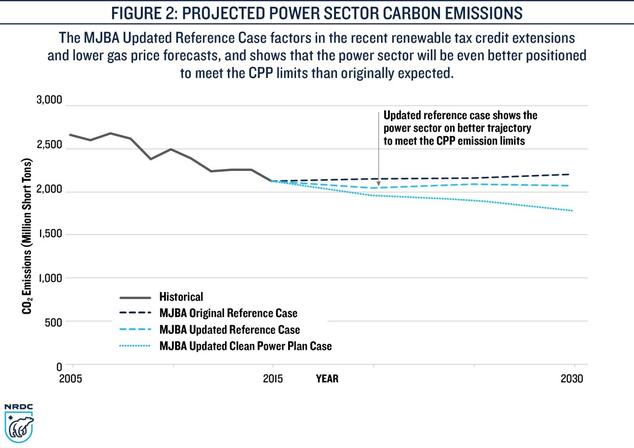 The EPA repeal proposal breezes by these falling-cost studies in a brief sentence, eager to get back to its own misleading story line. But EPA’s own modeling also demonstrates that the costs of achieving the Clean Power Plan have declined significantly since the rule was first published.

In its original analysis (PDF), EPA found that the marginal cost of reducing emissions, averaged across the country, would be $11 per ton of CO2 reduced. In 2016, when performing a separate analysis for revisions to the National Ambient Air Quality Standard for ozone smog, EPA found (PDF) that the average cost of power plant CO2 pollution reductions had dropped to just $4 per ton.

An accounting trick to inflate costs

In 2015, the EPA showed that increasing investments in energy efficiency would help states meet their targets while reducing costs associated with fossil fuel investments. Despite the overwhelming evidence confirming the modest costs of meeting the Clean Power Plan, Pruitt desperately wants to paint the CPP as overly costly and burdensome.

The CPP targets are readily achievable at even lower cost than EPA originally projected, despite Pruitt’s attempts to paint the rule as costly and overly burdensome.

To do so, the Pruitt EPA has fiddled with the books on the enormous cost savings from energy efficiency improvements in homes, commercial buildings, and industry. In its accounting, the EPA moved the energy efficiency from a reduction on the costs side of the ledger (where EPA previously had shown them as a negative cost) to an addition on the benefits side. Overall, the net compliance costs (gross costs minus benefits) are still exactly the same. But Pruitt has cherry-picked the gross cost number to support his baseless claim that the costs of the Clean Power Plan are higher than before.

This accounting maneuver wouldn’t fool anybody if it were tried on its own. The cost and benefit sides of the ledger would increase by the same amount. But Pruitt is doing this together with his sneaky moves to radically diminish the dollar value of the climate and health protection benefits of the Clean Power Plan — the subject of our next blog. This is the only way he can make the overall cost numbers appear to approach the benefits.

A recent report from Environmental Entrepreneurs (PDF) (E2) found that repealing the Clean Power Plan would deny Americans the opportunity to create 560,000 jobs and add $52 billion in economic value. That’s in addition to the more than 3 million clean energy jobs in the U.S. already. Solar and wind jobs grew by 25 percent and 32 percent last year, respectively. The CPP, coupled with strong investments in energy efficiency, would help accelerate clean energy growth and bolster the economy. President Donald Trump’s attempt to roll back the rule runs 180 degrees against his promise to create jobs.

More than 1,000 U.S. businesses and investors, representing over $1.4 trillion in annual revenues, recognize the inherent economic opportunities, recently declaring that "failure to invest in a low-carbon economy puts American prosperity at risk." That’s why many states, companies and cities have picked up the mantle of climate leadership.

The power sector has made remarkable progress over the past several years, and the CPP builds on and reinforces these market trends by relying on the same carbon-cutting strategies that the industry already employs. The CPP targets are readily achievable at even lower cost than EPA originally projected, despite Pruitt’s attempts to paint the rule as costly and overly burdensome.

In the next post, we’ll cover how Pruitt attacks the overwhelming consensus of the scientific community — twice — to try to hide the clear evidence that the benefits of the Clean Power Plan far outweigh the costs.

Hiding the benefits of the Clean Power Plan

Why the Clean Power Plan is good for business

It's time to act on the Clean Power Plan